Expositie: On the Nature of Botanical Gardens

On the Nature of Botanical Gardens features nine contemporary Indonesian artists who look critically at botanical gardens, colonial power, knowledge building and the economics of nature, its legacies and current consequences of approaching nature and plants. The exhibition seeks to decolonise the concept of botanical gardens and their role in building a Dutch colonial empire in Indonesia.

But it also seeks to go beyond decolonising the concept of botanical gardens by offering insight into knowledge systems of nature that existed prior to the advance of colonialism in Indonesia. Such knowledges were usually ignored, orientalised or destroyed which created a hierarchy of knowledge of nature. The exhibition also suggests fresh perspectives on representing nature by providing an entry-point to the myriad ways of thinking about and being with and in nature in contemporary Indonesia.

The knowledge of specific plants and their environments was crucial for their transplantation from one part of the globe to the other and contributed to the development of the massive plantations that were important for the colonial economy. With this exhibition, Framer Framed tries to shift from a more traditional compartmentalised gaze to a layered and deeper perspective on botanical gardens and connects with the contemporary art in Indonesia. More background information on the exhibition van be found here.

Comissioned works
Several new works were produced especially for the exhibition by Zico Albaiquni, Samuel Indratma, Lifepatch, Ipeh Nur en Sinta Tantra. We are proud to announce that one of them, the work Ruwatan Tanah Air Beta, Reciting Rites in its Sites (2019) by Zico Albaiquni, has been acquired by the Museum of World Cultures. The work follows the historical Dutch traces in the Botanical garden in Bogor and shows the contemporary appropriation of this area by public groups. In addition, the work reflects on the way in which this history is depicted in the exhibitions of Framer Framed.

Samuel Indratma developed two additional works for On the Nature of Botanical Gardens as continuation of his 2018 painting Putri Penunggu Pohon. The new works, of shadow puppets and video animation, create a 3D installation within the space. The puppets represent guardians of the forest, blurring the lines between nature, humans and animals. The role of these guardians is emphasised through the animation Sintren – Save the planet (2019) which is a collaboration between Indratma and high school students in Java. Through bright and dynamic images, accompanied by lively music, the video tells a mythical story about saving the natural environment.

Artist and activist collective Lifepatch developed a two-channel video work for Framer Framed based on their ingoing research on the traditional medicine and healing practices of the Batak. Hundreds of pustaha, books containing knowledge of these practices were taken from Sumatra during colonial rule and brought to European libraries. Lifepatch’s videos Spectacular Healing (2019) depict the ways in which these traditional methods and ways of understanding nature are still being used today. Lifepatch members Agung ‘Geger’ Firmanto and Agus ‘Timbil’ Tri Budiarto talked more about their work in the online Artist Talk.

Sinta Tantra was commissioned by Framer Framed and supported by Mondriaan Funds to create her 2020 installation Kebun Raya / Kebun Saya. The combination of a mural, postcards and other mixed media becomes what Tantra calls an ‘assemblage’ of art and artefacts. This commission was inspired by botanical gardens in Bali and Bogor as simultaneous sites of leisure, tourism and colonial processes of exoticism and musealisation.

Another commissioned work was realized by Ipeh Nur. She previously realized a new in situ artwork for the exhibition Pressing Matters (2018), a group exhibition with work by 24 Indonesian artists; the mural Bunga Merah about the genocide on the Moluccan Banda islands by the Dutch VOC in 1621. She developed this theme further in the work Perken (2019) that she performed on used rice sacks. 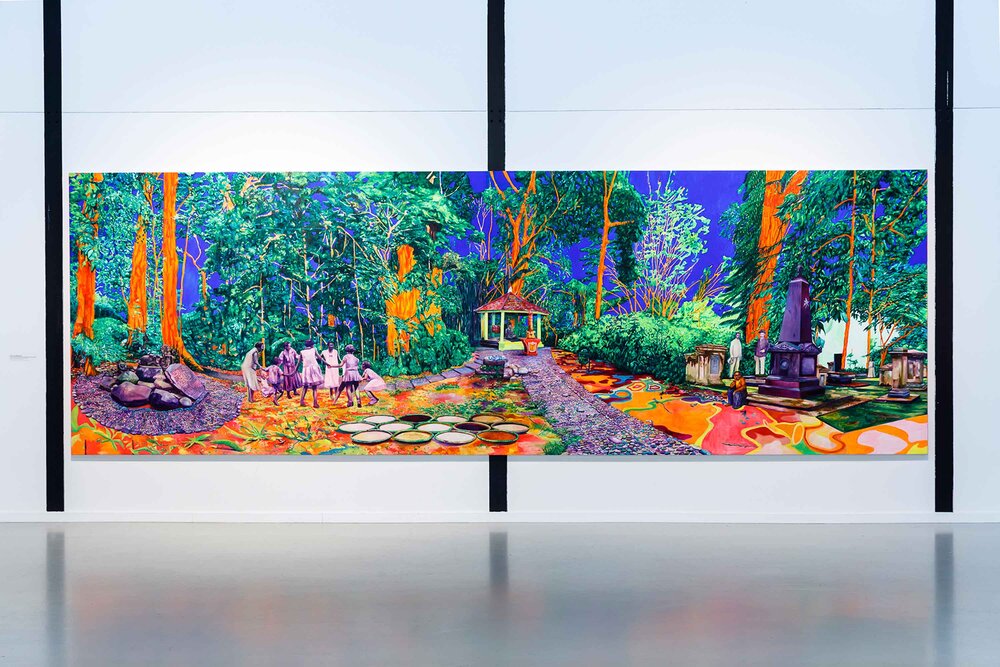 Online Corona program
Due to Corona, the exhibition space will be closed between March 13 and June 2, 2020. Want to stay at home without missing the On the Nature or Botanical Gardens exhibition? Which can; we bring the exhibition to you with an online program with videos, interviews, an education package and a virtual tours! Have a look here.

Curator
Sadiah Boonstra is a scholar-curator. She received her PhD from Vrije Universiteit, Amsterdam with the dissertation Changing Wayang Scenes. Heritage Formation and Wayang Performance Practice in Colonial and Postcolonial Indonesia (2014).

She is currently Asia Scholar at The University of Melbourne and Curator of Public Programmes at Asia TOPA, Melbourne. Her research and curatorial interests focus on the cultural history, heritage and performing arts of colonial and contemporary Indonesia in relation to the Netherlands and their representation in museums.

Finissage: On the Nature of Botanical Gardens

Artist Talk: On the Nature of Botanical Gardens

Opening: On the Nature of Botanical Gardens

Digitaal Archief: On the Nature of Botanical Gardens

Recensie: ‘On the Nature of Botanical Gardens’ bij Framer Framed