The exhibition On the Nature of Botanical Gardens: Contemporary Indonesian Perspectives was borne out of in-house research as critical perspectives of plants, the exploitation of nature, and botanical indigenous knowledge. Themes that have cropped up in previous Framer Framed exhibitions. 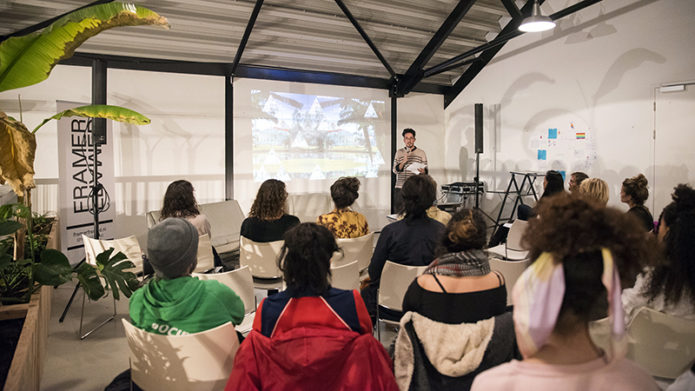 Exhibition Co-ordinator, Jean Medina, began the evening of Memoria Plantae in December 2019 by saying, “from poppy flowers in Amazonian tribes in Colombia to ancestral and delicious rice wine in Vietnam, and now in Amsterdam East in close proximity to the Hortus Botanicus and the Tropenmuseum. It only makes sense that we delve into the past of these institutions, as they have strong connections to the empire which are relevant for the Dutch botanical network.” Scholars Londa Schiebinger and Claudia Swan argue that early modern botany facilitated and profited from colonialism, and, additionally, colonial endeavours moved both plants, people, and knowledge around the world (2005).[1] Yet, how was this translated into a contemporary art exhibition?

Independent curator and scholar Sadiah Boonstra was invited to produce the exhibition, narrowing the focus to an indigenous Indonesian perspective. With her background in cultural history and heritage of colonial and contemporary Indonesia in relation to the Netherlands – and their representation in museums –of Boonstra’s curation is a decolonial framework. Working from Walter Mignolo’s concept of “decoloniality”[2] as praxis (2018), the exhibition aims to change the terms of the conversation, rendering knowledge and practice liberated from singular, Westernised narratives. In this way, the event, Memoria Plantae: Perspectives on the Dutch Botanical Network, was the first step to opening up temporalities[3]: local histories against the traditional, colonial/modern view of both botanical gardens and Indonesia.  In its new location in a former Amsterdam Oostergasbriek, the exhibition makes use of the open space and natural light that streams in through large windows to grow real plants in Arahmaiani’s mandala of mung beans, in Memory of Nature (2013-2019), and Sinta Tantra’s commissioned mural, Kebun Raya / Kebun Saya (2020).

But on 10th December 2019, the exhibition had yet to be fully realised and installed, existing only in artworks yet to be flown over to the Netherlands, and this particular conversation. Sadiah Boonstra sat down with Jennifer Tosch, founder of Black Heritage Tours, and Science, Technology, and Culture researcher, Andreas Weber, for a panel discussion about the Dutch Botanical Network and its histories in the lead up to Framer Framed’s current exhibition. Both to tease the upcoming exhibition and prompt affective, processual thinking and debate for Framer Framed’s work, the aim of the conversation was to take a broad view on botanical gardens and to critically examine them as sites of colonial knowledge and power, starting from the establishment of a botanical network in the seventeenth century. Zaheer Baber states that botanical gardens formed “complex integrated links that were essential for the global networks that enabled the mobility of plants, people, power, profit and patronage”[4] (668). Although On the Nature of Botanical Gardens is focused on Indonesia, much can be said for other colonies and their interwoven networks. Andreas Weber and Jennifer Tosch were able to expand the scope of the critical analysis of botanical gardens, if only for an evening.

Andreas Weber, co-author of Laborious Transformations: Plants and Politics at the Bogor Botanical Gardens (2018), provided Framer Framed with a glimpse into his vast research in the fields of natural history, chemistry and material practices in the context of the former Dutch empire in Southeast Asia. As an assistant professor at the University of Twente, Weber wrote his own PhD on the work of Caspar Reinwardt, the first director of Bogor Botanical Gardens which is also the subject of Zico Albaiquni’s painting in Framer Framed, Ruwatan Tanah Air Beta, Reciting Rites in its Sites (2019). Established in 1817, the gardens at Bogor were cultivated on a fortified capital of a Sunda Kingdom, which, as Boonstra highlighted after working with Albaiquni, was already home to special flora and fauna planted by local communities and was thought to be a sacred burial site. The social value and meanings imbued into plants signifies what Weber emphasised as the concurrence of plants and politics. The Bogor Botanical Gardens was built in West Java next to the, then, seat of the colonial Governor General with no coincidence – and the transfer of plants required military involvement. The establishment of a garden, and the subsequent scientific research, required many forms of invisible labour and local expertise that were bound up in social hierarchies and a political system subject to the colonial matrix of power. Again, plants and politics go hand in hand because it is never simply just about plants.

Jennifer Tosch, a scholar of heritage and memory studies, gave a historical timeline and broad overview of the history of botany in Netherlands from the 16th to the 21st century.  She also drew attention to the workers, consciously forgotten in history and memory, who were studied and classified in the same way as flora and fauna. Both Tosch and Weber highlighted how this was done through the process of naming plants, an idea that returned in the Q&A with Latin being a “common” language of science. However, naming and classifying is still bound up in a politics and modern ideas of rationality, as Tosch pointed out with Linnaean taxonomy. She also emphasised that, hopefully, the exhibition would indicate that “the history of botanical gardens is directly connected to the history of the rise of empire and the war that was waged on indigenous peoples.” Hortus Botanicus, Amsterdam is thus a site of colonial nostalgia. Over 375 years old, a visitor to the botanical garden is visually confronted with the history of empire through the plants. Tosch indicated that the space works as a living museum, “as soon as you walk inside you are confronted with the Dutch East Indies and South Africa, all this vegetation that came over as seeds or bulbs to be studied and to be explored. This idea of the exotic [plants] often implies that we’re talking about something other than, something different” to the dominant narratives but “all narratives are linked together in some way or another”. 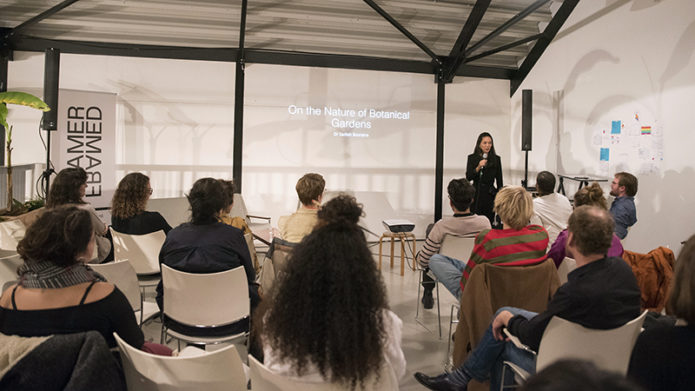 Curator of the exhibition ‘On the Nature of Botanical Gardens’, Sadiah Boonstra at Framer Framed | Photo: Betul Ellialtioglu

Boonstra followed Tosch’s presentation with a preview of the artists that would be displaying their work. However, some could only be anticipated because, as with Zico Albaiquni’s painting, commissions were in the process of being made especially for Framer Framed. This included Sinta Tantra’s ‘assemblage’, where the combination of art and artefacts generates a dialogue between past and present, one identity with another, and creates a new system of looking and a more subjective way of thinking. Samuel Indratma’s painting, Putri Penunggu Pohon (2018), was readily selected, but the shadow puppets were an extra addition, shifting the artwork into a 3D installation, along with the animated video in collaboration with students of Komputama High School-Majenang. Boonstra emphasised the importance of layered meanings for the theme of the exhibition, and in Albaiquni’s work. His bright colours are taken from Mooi Indië paintings of Dutch art history, the pavilion in the painting’s  centre – initially built by the colonisers – had become a site of local rituals for communities, and the tiny figure of Sukarno, the first president of Indonesia, marks the gardens as now part of national history, rather than simply colonial ruins left to be reckoned with. This concept of “imperial debris” is taken from Ann Stoler as both the material and intangible remains of colonial domination and how they occupy residual pasts to make claims on the future. [5]  These ruins also encompass the ways in which people seek to confront the debris’ durability. The almost ghostly figures in Reciting Rites look simultaneously as if they were newly inserted and yet always there, enduring, absent from the viewer’s gaze in their shades of purple, alluding to a history and knowledge that may appear inaccessible to outsiders. This is undoubtedly a representation of Indonesian traditions entangled with Dutch history, but just as important as a distinct national entity. Albaiquni re-appropriates Dutch art history of a site that was appropriated by Dutch colonisers in pursuit of scientific power, which was originally a home for the Indonesian family, hands held together. The site is now again being re-appropriated by the local community. The artwork, once a visitor’s gaze has been shifted to the decolonial, exemplifies Mignolo’s idea of “re-existence”, re-defining and re-signifying of life and knowledge in conditions of dignity. [6]

Although each speaker offered different perspectives and starting points, they reached the same general conclusion: the most important factor in decolonising botanical gardens is recognising that they do not exist in a vacuum but rather are situated in connected histories. In retrospect, the contemporary artworks of On the Nature of Botanical Gardens aim to communicate just the same idea. From the present perspective, the history of nature and botany are entangled in some many other ontological and epistemological concerns, such as the production of scientific knowledge and the indigenous, often invisible, expertise and labourers. For example, Edwin’s Hortus (2014) video that calls attention to the underlying sexualisation and exoticisation associated with people and plants in colonisation, or the pain, suffering, and consequent medicinal traditions from pustahas  in Lifepatch’s video Spectacular Healing (2019). Framer Framed’s exhibition subverts preconceived notions of botanical gardens to offer a new, decolonial lens of memoria plantae through art. 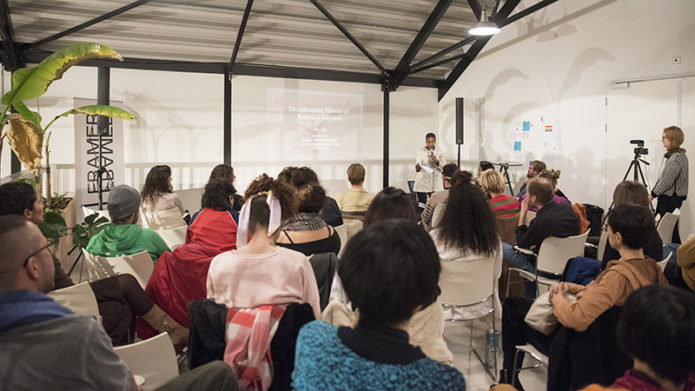 However, the most striking undercurrent of the conversation was Tosch’s key phrase of creating “a future for the past.” Weber called for a new and inclusive history of Bogor Botanical Gardens to be written in the future, which would pay more attention to both the intellectual and physical labour involved while taking a trans-imperial approach to highlight the botanical and sociological exchange that occurred in international and regional networks. Boonstra’s curation was similarly influenced by “moving towards the future” so that the colonial period would not become the only point of reference for Indonesian history. The panel discussion, in the end, called for botanical gardens to be re-evaluated as colonial ruins, imperial debris whose “effects occupy multiple historical tenses”.[7] The tangibilities of empire exist within their material spaces and the scientific knowledge handed down today to be utilised in the future. It seemed particularly fitting that the final question from the audience was “What is your reflection on this botanical culture and for nature in the future?” Jennifer Tosch concluded “the future looks a lot better if we reclaim what we have lost and what was taken away, and still it’s important to shift your point of view. In fact, all of us can stand to shift our gaze, turning away from the dominant narrative they read about and see all the time. So, I really applaud you [Sadiah Boonstra and Framer Framed] for taking a leap forward in a new way of presenting the way we think about botanical gardens.”

With the future of both botanical gardens and how we see them in mind, Framer Framed used this conversation as a stepping-off point for retrieving and re-writing Indonesia’s own relationship with nature and botany. What we perceive when we visit On the Nature of Botanical Gardens or botanical gardens themselves, is a series of connected histories, a network interwoven and entangled with politics and power, which is suggestive of how to use these histories for future criticisms. Additionally, being critical is not synonymous with criticising – although that may be a side effect. To think critically means to never take anything for granted, to deconstruct structures and institutions we encounter, such as the Hortus Botanicus. And what do botanical gardens, their plants and seedlings brought over from colonies sprouting and thriving in the metropole of Amsterdam, represent more than a future of the past?

Jennifer Tosch has continued with her research on the botanical gardens in Amsterdam and will return to Framer Framed soon for the double public program, Re-Visiting Botanical Gardens interventionist tour and panel discussion in collaboration with the Hortus Botanicus at a later date.

Expositie: On the Nature of Botanical Gardens

Digital Archive: On the Nature of Botanical Gardens