Currently showing at Framer Framed: HERE/NOW: Current Visions from Colombia, curated by Carolina Ponce de León, in collaboration with What Art Can Do/Simone Swildens. The exhibition is on view across two different spaces in Amsterdam-Noord – Framer Framed (until 30 June) and Beautiful Distress House (until 3 April).

HERE/NOW: Current Visions from Colombia features twenty artists presenting contemporary art and photojournalism created in the context of Colombia. The exhibition explores these artists’ responses to the shifting cultural, social and political landscapes of a country scarred by a 60-year long history of armed struggle. HERE/NOW is presented partly at Framer Framed, with a focus on contemporary works, and partly at Beautiful Distress House, where photojournalism plays a more significant role.

The exhibition brings together both established and upcoming artists, revealing how artistic perceptions on the country’s history of political violence have shifted between generations. The artworks on view at Framer Framed can be characterised by the use of conceptual and metaphorical languages to speak of the human cost of the Colombian conflict. These are works that tend to be formally subtle, austere, imbued with a sense of mourning. A highlight is the installation Narcisos by Oscar Muñoz, that uses ephemeral materials to relate to memory, loss, and the precarious nature of human life. Muñoz, a recipient of the Prince Claus Award in 2013, is one of the most significant contemporary visual artists in his country, and his work has gained solid international recognition in recent years.

In contrast, the works presented at Beautiful Distress House tend to exhibit perspectives that are more critical and cynical in tone and in which humour and irony are meaningful tactics. These works are less focused on the traumatic effects of political violence and more on the role of the media in defining the symbolic order that represents the war. The disparities in approaches and languages that rise between the two parts of the exhibition evoke the ungraspable nature of Colombian reality. 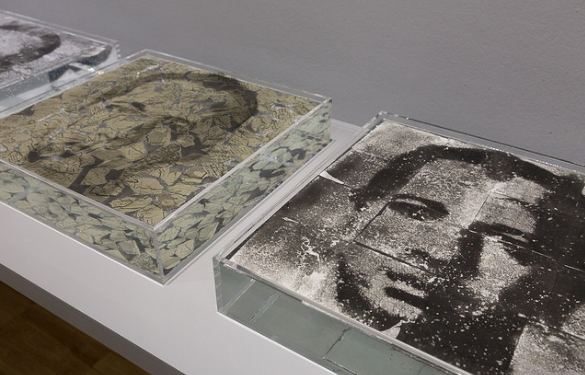 The exhibition also introduces the power of documentary photography, grounding the viewing experience with compelling images of the armed struggle. For this component of the exhibition, Ponce de León collaborated with non-fiction photographer Stephen Ferry. On view is Ferry’s visual anthology Violentology, as well as works by other journalists who captured the Colombian conflict and the aftermath of the peace agreement settled between the Colombian government and the FARC in December 2016. These photographs are not meant to present a complete picture; rather, they form specific visual testaments of that experience.

Transcending the walls of the two exhibition spaces, the exhibition features an outside installation at NDSM wharf, by cultural foundation Más Arte Más Acción. The installation, Re:Bandera, consists of 12 selected flags designed by Colombian artists at a critical time when the country was at the eve of a new era of peace. The flags, bright and colourful when they were originally installed in Bogotá in 2016, are now tattered and torn. They reflect the high contrasts the country has been through in its struggle to defy political violence and gain peace.

HERE/NOW speaks of a time and place faced with the paradoxes of social conflict. By mixing the metaphorical languages of art with the more direct stance of documentary photography, the exhibition seeks to bring nuances and complexity to the understanding of the experience of life and art in the context of social conflict. The different visions featured in HERE/NOW stress the potential of visual culture in Colombia as a form of resistance and questioning, and affirm the crucial role it plays in building a memory of the present.

Curator
Carolina Ponce de León is an independent curator and art critic. She has served as the Visual Arts Advisor at the Ministry of Culture in Colombia between 2015 and 2016 and was appointed by the Ministry of Culture as the Visual Arts Advisor for the Year Colombia-France 2017. She was Director/Curator of Visual Arts at the Luis Ángel Arango Library (1984-1994). She has also been curator of the Museo del Barrio in New York.

As an art critic, Ponce de León has published weekly columns in the main national newspapers such as El Tiempo and El Espectador. Her publications also include books, essays, articles and reviews. She has been an adjunct professor in the graduate programs of visual criticism and curatorial studies at the California College of the Arts in San Francisco.

On the occasion of the Here/Now exhibition, a special symposium will take place at the Stedelijk Museum Amsterdam, where the reactions of artists on the current social and political climate in Colombia will be a central topic. With curator Carolina Ponce de León, and several HERE/NOW artists: Stephen Ferry, Andrea Acosta, Luis Fernando Roldán & Ana María Rueda. For the full programme and tickets (from €3), see here.

With guest speakers Tatiana Roa and Mariëlle Videler, and a screening of documentary 'Abel' (2015). Part of a series of events on indigenous activism and land rights, departing from exhibition HERE/NOW.

Part of a series of events on indigenous activism and land rights, departing from the exhibition HERE/NOW: Current Visions from Colombia.

In the context of exhibition HERE/NOW.

The exhibition at Beautiful Distress House is on view until 3 April, at Framer Framed until 30 June.

Lecture: Mieke Bal - Of What One Cannot Speak: Doris Salcedo

Lecture at Beautiful Distress House, in the framework of exhibition HERE/NOW.

At Stedelijk Museum Amsterdam, in the context of exhibition HERE/NOW at Framer Framed and Beautiful Distress House