Framer Framed presents a unique collaborative exhibition titled Re(as)sisting Narratives, curated by Chandra Frank. The exhibition explores lingering legacies of colonialism between South Africa and the Netherlands through engaging with contemporary artists from both countries.

Re(as)sisting Narratives is a result of a two-year project with South African based partners: District Six Museum and Centre for Curating the Archive. Participating artists explore broader themes such as race, gender, memory, trauma and spatiality in their work. This multi-media group exhibition features work by artists who are connected by a shared interest in evoking and readdressing that what is left behind, that what is (in)visible, and a visual fusion of reality and fantasy to create new ways of being.

Similarly, Athi-Patra Ruga’s, The Night of the Long Knives I, from the ongoing performance series The Future White Women of Azania, centers the body and comments on a pre-and post-apartheid state, but through evoking fantastical characters adorned with colorful balloons. The tapestry UnoZuko reflects embroidered narratives of future imaginings and inhabitants of Azania. 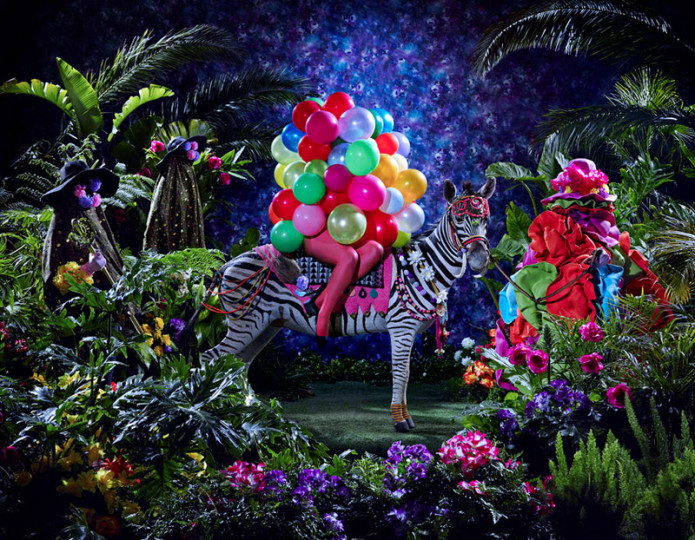 Mohau Modisakeng’s video art pieces Ga Bose Gangwe and Inzilo – an isiZulu word for ‘mourning’ – speak to the enactment of ritual and healing, simultaneously alternating between inward and outward gestures, with the Ditoala Series (VII and XIII) offering a commentary on the Black body within the South African post-colonial context. 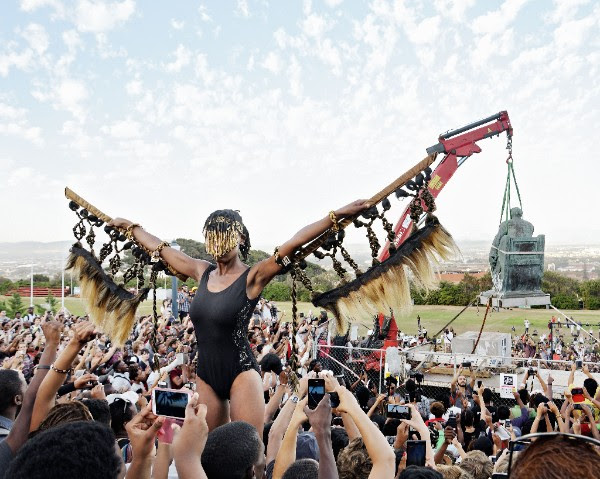 Both the work of Mary Sibande and Sethembile Msezane speak to Black womanhood. Sibande’s installation Conversations with Madam CJ Walker evokes speculative fiction in which transnational connections are addressed, whereas Sethembile Msezane uses performance to address the absence of Black women’s bodies in memorialized public spaces. Both Chapungu – The Day Rhodes Fell and Untitled (Freedom Day) reflect Msezane’s performance art,  illuminating the failures of the New South Africa and the transformative potential of current student protests.

Several new works where commissioned for the exhibition. The exhibitions, both in Amsterdam and Cape Town, include work made on site by the artist collective Burning Museum Collective, which consists of wheat pasted edited archive photo’s. The collective uses music, language and space to interrupt the grammatical structure of city architecture.Presented in the exhibition space of Framer Framed and outdoor on the Steve Biko Square in Amsterdam are onsite-made wheat pastes and enlarged photocopies coming forth out of their project Straatpraatjies, that questions, ‘What would historical transcriptions in the present landscape look like’?

Poet, Toni Stuart, and filmmaker, Kurt Orderson’s installation: Krotoa-Eva’s Suite: a cape jazz poem in three movements, challenges the dominant male colonial narration of history through centering on Krotoa-Eva’s historical rol. She was an early mediator between cultures and instrumental in working out terms for ending the First Dutch-Khoi-khoi War.

Artist Judith Westerveld also realized new commissioned works with The Remnant. In the video installation she examines historical remains of constructed (racial) boundaries such as walls and hedges in the South African landscape, created during the time of Dutch colonialism.

Re(as)sisting Narratives is conceived as an ongoing project and dialogue that engages and incorporates ideas of queerness, decoloniality as well as the futurity of the archive.

Sunday August 28th, 17:00
The exhibition will be opened with a performance by artist Toni Stuart. In presence of curator Chandra Frank, artist Judith Westerveld and artists of the Burning Museum Collective. In addition to the opening performance, an extensive public program will take place throughout the duration of the exhibition among which a performance by dancer, choreographer and LGBTQI activist from Cape Town, Kirvan Fortuin.

For the educational program surrounding the exhibition, Framer Framed collaborated with ‘Face to Face’. Face to Face develops a new teaching method based on digital communication technology that is used to enable exchange between students in different countries. In the run-up to the exhibition Re(as)sisting Narratives, two schools in the Netherlands and South Africa were linked. Pupils simultaneously worked together in online workshops: ‘international peer education’. One of the outcomes of the project was a pop-up exhibition that was shown alongside the exhibition Re(as)sisting Narratives at Framer Framed and the District Six Museum in Cape Town. More information can be found here.

Memorial Celebration to commemorate the life of Kirvan Fortuin

Exhibition visit and tours by artist Judith Westerveld during the 24H Noord event.

Performance: My Tongue Softens On The Other Name

Interactive performance reflecting on the exhibition Re(as)sisting Narratives, through taking inspiration from a poem by Gabeba Baderoon.

A discussion on erasure and the archive.

An intervention by Burning Museum in the Transvaalquarter, Amsterdam.