Exhibition: Crisis of History #3 - Beyond History

Beyond History explores the post-history landscape in the Middle East. It is the final part in the Crisis of History series, where the effects on this region of the ideological imposition of ‘the great historical narrative’ developed in ‘the West’ are examined. The first two exhibitions of this series examined the effects of this imposition and the strategies of resistance deployed by artists in response. The last exhibition takes as its departure point the crumbling of this supposed great historical narrative and is guided by the question: how can we deal with the past, present and future outside the normative framework offered by history?

Within this examination of a plurality of possibilities for future narrations on these timeframes, Crisis of History #3 – Beyond History focuses on differences and similarities in historical stories considerably stemming from the Persian Gulf region, and Iran and Saudi Arabia in particular. 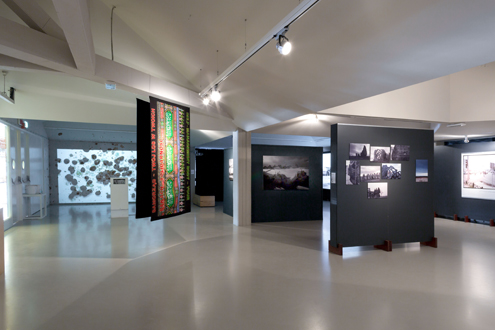 Curators
Elham Puriyamehr and Robert Kluijver, with the support of Framer Framed

According to curator Elham Puriyamehr artists in Iran must deal with two great historical narratives: those followed by the West and their own government. In their eyes, both may already be bankrupt, as they offer no comfort in the present or hope for the future. As a result, many of them investigate death or absence as a way to freedom, or they develop uncertain micro-narratives that draw history to question. The artists distinguish between issues and their representations: the past versus history, for example.

Curator Robert Kluijver states that on the other side of the Persian Gulf, Arabian artists are discovering a rich pre-Islamic history, which is being hidden from them for reasons of religious ideology and political convenience. What if they could reconnect to that history, and throw off the mantle of stifling collective identity, which their history books prescribe?

For more information
Download the English handout with the link below.

An evening in collaboration with Cineblend and Dancing on the Edge.

Documentary: 'From My Syrian Room'

Bustour with performances and lectures about the North of Amsterdam.

Performances and bustour through Amsterdam Noord.

With Hamid Severi and Farzan Sojoodi.

During the exhibition Crisis of History #3 - Beyond History there will be a special event on every Tuesday night with film screenings, lectures and guided tours.

Interview: Elham Puriyamehr about the exhibition 'Crisis of History'