A group exhibition at Framer Framed in collaboration with Castrum Peregrini

Some Things Hidden is a group exhibition about hiding and the hidden, and about the politics of (in)visibility, curated by Nina Folkersma and artist Charlott Markus. The exhibition – previously on show in a more performative, smaller version at Castrum Peregrini (18 – 26 Nov 2017) – consists of a carefully selected combination of existing and new works by upcoming and internationally renowned artists of different generations.

This exhibition’s point of departure is artist Charlott Markus’ family history relating to her great aunt, a Jewish woman who managed to ‘hide’ during World War II in Berlin, while still partaking in public life – in a manner of speaking hiding in plain sight. At Castrum Peregrini, a former safehouse during the war, which is now a cultural institution, the exhibition was mainly centred on hiding as a way of staying alive. What does ‘hiding’ mean today? What threats do we have to hide from and what things do we hide from ourselves?

At Framer Framed, the focus is on the politics of (in)visibility. A status of (in)visibility is not neutral – so who decides what is and is not made visible in society? Which people, images, and habits are given visibility and in the process are considered ‘normal’? Who or what gets less prominence and as a consequence remains ‘hidden’? And which parts of our histories are/are not emphasized in our grander, national narratives?

The exhibition also addresses the importance of personal stories and strategies to combat this structural invisibility. Who are these ‘invisibles’ and are they truly invisible if defined as such? When can (in)visibility be considered a choice or a form of resistance? 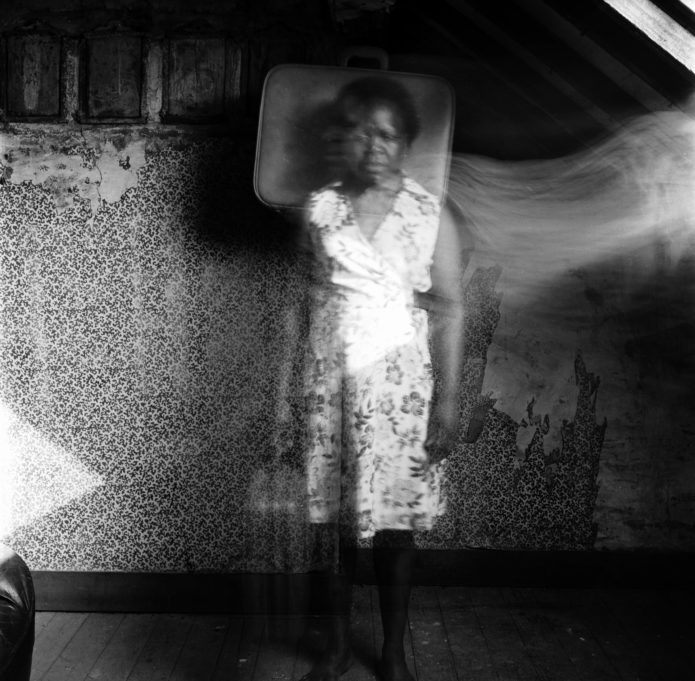 The exhibition at Framer Framed is on show from 19 January – 11 March 2018 and includes spatial works, installations and photography. In addition to the artists mentioned above, the exhibition at Framer Framed is further complemented with existing or new work by Hélène Amouzou (TG, 1969), Lynn Hershman Leeson (US, 1941), Bertien van Manen (NL, 1942), Cauleen Smith (US, 1957) and Batia Suter (CH, 1967).

Some Things Hidden is part of the year program The Female Perspective at Castrum Peregrini, curated by Nina Folkersma. On the occasion of the exhibition and the end of the year program, an extensive magazine will be presented: the Some Things Hidden part is focused on the exhibition concept, the participating artists and the art works on show; the other part is dedicated to the programs that took place as part of The Female Perspective. Next to the exhibition at Framer Framed, an extensive public program will take place. More information coming soon.

Made possible by: Dutch Ministry of Education, Culture & Science, Amsterdam Fund for the Arts, Tolhuistuin and Mondriaan Fund.

Statement in regard to the recent (22-2) article in Vrij Nederland, Misbruik in naam van het hogere

On Thursday 22 February 2018, the Dutch magazine Vrij Nederland published an article titled Misbruik in naam van het hogere. The piece reveals a history of structural and systematic abuse within the past of the organisation of Castrum Peregrini.

It is with horror that we read these multiple stories of abuse of power, including sexual abuse, involving both adults and minors. We are deeply shocked and immensely saddened by these stories, and in great support of the courageous voices of the victims recorded in the article. Our empathy and support go out to all those affected, the victims and their loved ones.

As Castrum Peregrini is a collaborating partner for the exhibition Some Things Hidden, that is currently on show at Framer Framed, we felt it important to make a statement as an organisation and as curators of the exhibition – especially given the exhibition itself is about hidden stories, (in)visibility and power structures.

In July 2017, Framer Framed, Castrum Peregrini, artist Charlott Markus and curator Nina Folkersma, were in the process of finalising the exhibition project Some Things Hidden, when a personal article by Frank Ligtvoet appeared on the website of Vrij Nederland. This column came as an outright and alarming surprise to us. The current directors of Castrum Peregrini assured us they were equally unaware of and completely taken aback by this history. They stated there was no reason to believe this was a larger-scale, structural issue and, as we experienced it, the matter was approached with much seriousness. At the conditional request of Framer Framed and the curators, Castrum Peregrini agreed to address this history in the public programme related to the exhibition. With Castrum Peregrini committing to adopt an active, understanding, transparent and investigative stance to the dark sides of their history, we continued the collaborative project.

In a public event that took place last week, Tuesday 20 February, we screened the documentary Herengracht 401 by filmmaker Janina Pigaht, on Castrum Peregrini’s past. The film includes experiences of abuse of power. After the screening, there was a public conversation with the filmmaker and Frans Damman, one of Castrum Peregrini’s directors. It was at this moment that Framer Framed and the curators were made aware that a second extensive research and article in Vrij Nederland was due for publication that week, providing further evidence and important new information about the extent of what had taken place.

Again, our empathy and support go out to the victims and their loved ones. At this moment, we are in conversation with several people that are close to the victims, who so courageously came forward with their experiences. For the current organisation of Castrum Peregrini we wish that they approach the victims with openness and empathy, and that they do everything in their power to open up their history for thorough investigation.

We think that it is of utmost importance that stories like these come out into plain sight and, instead of being hidden, can be confronted and dealt with in a safe, compassionate and transparent way.

A guided tour through the exhibition 'Some Things Hidden', by artist & co-curator Charlott Markus.

Documentary on the controversial history of Castrum Peregrini, followed by a conversation with filmmaker Janina Pigaht, Frans Damman (Castrum Peregrini) and Josien Pieterse.

Curator Nina Folkersma gives a guided tour of the exhibition 'Some Things Hidden'!

Performance in the context of exhibition 'Some Things Hidden'.