Framer Framed is happy to present It Won’t Be Long Now, Comrades!, a group exhibition coinciding with the 100th anniversary of the Great October Socialist Revolution in Russia. With a geographical focus on countries directly affected by the October Revolution (and the Communist regime as its aftermath), the exhibition explores the potential emancipatory power of revolution and resistance in these post-communist regions today – often with reference to the area’s complex histories.

Nowadays there is a wide-spread scepticism of revolutions, with people claiming they are doomed to fail, or that they only worsen situations. This exhibition avoids the usual focus on disappointments. Instead, it stresses the often taken-for-granted rights today which have been hard-fought in the revolutions of the past, and the potential of revolutions in the present to bring about future change. It also focuses on the difficult but important task of self-organisation and bridging different struggles and opinions, in setting up truly collective political action.

So called ‘post-communist’ regions have witnessed multiple rapid changes in regime and state formation throughout the 20th century. Sudden shifts from communism to unfettered neoliberal capitalism to new hybrid forms have led to an overwhelmingly rapid change in national values and ideology; which may well serve as a potential learning ground, suggesting ways of challenging the all-consuming Western neoliberalism. By looking at the histories and present situations of a variety of post-communist countries, the artists and curators of It Won’t Be Long Now, Comrades! aim to find answers to a series of pertinent political questions. How do you effectively organise citizen-based political action? Where does political agency lie, and how can it be (re)claimed? How can different, sometimes opposing voices be included in a revolutionary idea in an equal matter – combining their many complex and urgent points of view? What can we learn from the past in terms of revolutionary power today? 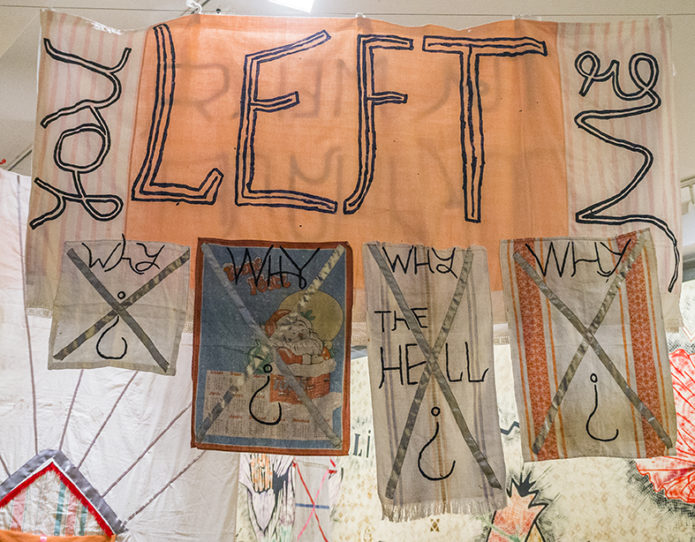 Image: Nikolay Oleynikov – IN A COLD SWEAT I JUMPED OUT OF MY BED, I DREAMT THAT UPRISING WAS NO LONGER POSSIBLE… (2016)

Topics revolving around the concepts of agency, political voice, and equal representation of marginalised social groups are manifested in the works of Željka Blakšić, Marge Monko, Karol Radziszewski, and Tigran Khachatryan, as well as in the research project by Tereza Stejskalová and Zbyněk Baladrán. Along similar lines, Agnieska Piksa and Gluklya remind us that resistance may find various forms, and that sometimes it is an inherent part of everyday life.

Stemming from both a theoretical and a hands-on approach, Andreja Kulunčić’s long term multidisciplinary research project Creative Strategies deals with the political self-organisation of communities; whilst for Nikolay Oleynikov, love is rebellion, and the excitement of revolution is akin to sensual excitement: it makes old way of life impossible, and opens a door to something new and uncharted. In her film It is now a matter of learning hope Irina Bucan seeks to address the role of hope in relation to the utopian imagination and the possibility of social change, reciting texts of past utopian thinkers positioned in the physical environment of one of the unfinished projects of Romanian dictator Nicolae Ceaușescu. Complementing this, Mykola Ridnyi’s newest film Grey horses examines the controversy surrounding the construction of historical memory and glorification of historical figures, in relation to current political agendas. Lastly, Nikita Kadan looks for ways of maintaining the achievements of new born civil societies through responsibility and care.

The title of the exhibition is borrowed from Ninotchka, a Hollywood comedy from 1939 that mocks the dull and grey communist existence, in comparison to the glitter and glamour of capitalism. With the phrase It Won’t Be Long Now, Comrades! the protagonist of the film, Nina Ivanovna Yakushova (Ninotchka), reflects on the crisis of the capitalist system. In a similar way, the artists in this exhibition point to previous rapid transformations to remind us that political change is possible, and to continue the struggle for inclusive, bottom-up alternatives to neoliberalism.

Exhibition: To those who have no time to play

A Solo Exhibition by Gluklya

Finissage and book launch: The Missing

Finissage of the exhibition 'It Won't Be Long Now, Comrades!' and the book launch of School of Missing Studies.

Love, comedy, and communism in Lubitsch's Ninotchka, and the work of Alexandra Kollontai

A lecture by Aaron Schuster in the context of exhibition 'It Won't Be Long Now, Comrades!'.

Featuring the pop-up museum I’m So Angry, I Made a Sign