Exhibition: To those who have no time to play

Framer Framed presents To those who have no time to play, the largest solo exhibition by the Amsterdam-based artist Gluklya (Natalia Pershina-Yakimanskaya), curated by Charles Esche. In keeping with her previous work, the exhibition involves many collaborators from Kyrgyz textile workers and recent migrants to the Netherlands to musicians and writers.

The exhibition is structured around four elements, each with its own unique architecture. These are two yurts, a dome, and a stage on which there will be occasional live performances. The works take us from Amsterdam to Bishkek, and via St. Petersburg back to Amsterdam again.

On the stage in Framer Framed, we see hanging dresses singing Antigone Update, a new version of the famous Greek tragedy Antigone written by Gluklya with Matras Platform. The music for the work is composed by Vladimir Rannev, with the vocal ensemble N’Caged (Moscow). During the opening of the exhibition on 13 October 2022, live performers from Matras Platform will join the first presentation of Antigone Update. Matras Platform is an informal mixed group of migrants and travellers from around the world who are living in Amsterdam; Gluklya initiated the group during the COVID pandemic.

The Red Yurt introduces the stories and artworks of women textile workers in Bishkek, Kyrgyzstan, operating under harsh conditions at home for the export trade to Russia. The dome resembles a melting snowball, inside which videos show the annual 1 May protests in Gluklya’s birthplace of St. Petersburg. The artist recorded these protests from 2017 to 2019, since then the Labour Day demonstrations have been banned.

The small yurt is an intimate space to read the diaries of Gluklya and Murad Zorava written during their stay in the former Bijlmerbajes prison in South-East Amsterdam, when it was used both as an artists’ incubator (broedplaats) and asylum centre.

Although conditions in Bishkek or St. Petersburg might seem far from Dutch society, bringing these different social and emotional geographies together through art emphasises connections between them. It is impossible to ignore the many disasters looming on the horizon: the climate crisis, extreme social inequality, the war in Ukraine and the harsh working lives of people supplying cheap goods to Western high streets. Gluklya relates it all in a surreal landscape, where humour appears unexpectedly. She takes us on an associative journey through global abuses, whether they be forced labour and migration, economic exploitation or abuse of power. 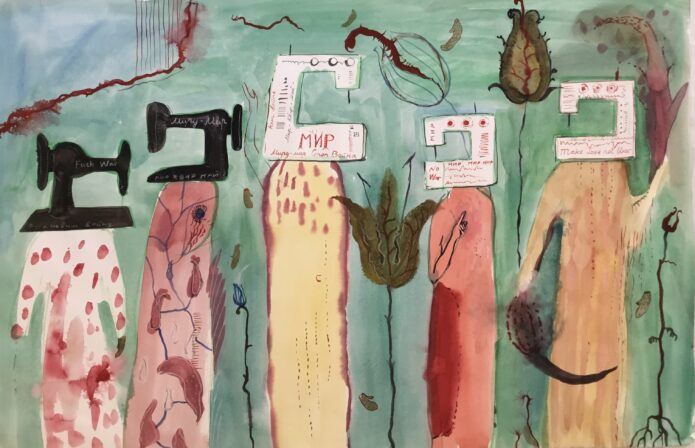 Gluklya / Natalia Pershina-Yakimanskaya lives and works in Amsterdam. Considered one of the pioneers of Russian performance art, her research is concentrated on finding ways to talk about the traumatic divisions within society and their implications on people’s lives. The conflict between the political regime and the inner world of the person forms the subject of her surreal drawings, performances in collaboration with diverse people, installations with poetic texts and things, and the Utopian Clothes. She is also part of Chto Delat, a multidisciplinary collective of which she has been an active member since 2003.

Charles Esche is the curator of the exhibition To those who have no time to play (2022). He is also the director of Van Abbemuseum, Eindhoven; an advisor at Jan van Eyck Academie, Maastricht and professor of contemporary art and curating at Central Saint Martins, UAL, London.

The music for voices, electronic sounds and ensemble of sewing machines is composed by Vladimir Rannev and performed by the vocal ensemble N’Caged (Moscow).

For those interested a free audio tour is available in English.
Below: podcast Bureau Buitenland – Russische protestkunst in Amsterdam (Russian protest art in Amsterdam)

Finissage: To those who have no time to play

Presentation: Letter to a Silk Road

Opening: To those who have no time to play

Exhibition Opening with artist Gluklya and a performance by Matras Platform

'To those who can imagine' by Anna Bitkina

Who has no time to play? by Curator Charles Esche