The Kazal Project: Tracing the Memory Through the Haitian Gaze

Scroll down for French

For Kolektif 2 Dimansyon (K2D), the practice of photography means above all informing, documenting, testifying, through the lens, of a given reality. Their approach to photography has been built over the years in the relationship with the Haitian national press and the international media, in response to a demand from the news, as the multiple political, economic, social, ecological crises who regularly cross the country and who often make the front page of international newspapers.

Their work is nurtured and is flourishing in dialogue with the many foreign photographers and journalists who have worked or lived in Haiti since the early 90s, such as Alex Webb, Bruce Gilden, Chantal Regnault, Paolo Woods, Arnaud Robert, Leah Gordon to name a few, also with renowned Haitian news photographers like Thony Bélizaire who Haitian cinematographer Raoul Peck paid tribute a few years ago by publishing the book Witness to History: Images of the Struggle for Democracy in Haiti (1986-2013). In this respect, their photographs continue, while going beyond, the experience of photojournalism and the tradition of ‘street photography’. This reference is ​​an important component of their photographic practice, which it is important to look at and think about, in order to avoid a biased reading of their work.

It is clear that this documentary approach to photography is an exception in the panorama of contemporary photography from Afro-diasporic worlds, particularly in the Caribbean. Within these contexts, different photographic registers prevail, I am thinking of the self-portrait, stage photography, or even fashion photography. This ‘Haitian exception’ constitutes, in my opinion, one more reason to watch these works with particular interest.

The images presented here are not the product of an exercise in style or an artistic approach (without minimising their interest here). They are rather the fruit of a body-to-body engagement with the subject photographed, in the occurrence the inhabitants of Kazal, a small village north of Port-au-Prince, the site of one of the worst massacres under François Duvalier’s dictatorship in 1969. According to Fabienne Douce, Edine Célestin, Georges H. Rouzier, Reginald Louissaint Jr., Moïse Pierre, and Mackenson Saint Felix, the urgency was not to create and display ‘beautiful’ images but to repair an injustice, documenting a disappearing oral and visual memory: make invisible memories visible in a race against time. For good reason: most of the witnesses to the massacre have since passed away. These images are ‘beautiful’ because they look for justice, they aims to be ‘right’: it is precisely in this engaged approach, close to the sociological survey and far from reflectors, that we find the strength of this project and its political and decolonial value.

In line with their previous works, K2D tackle the challenge of documentary photography head on, conducting interviews, researching sources and fieldwork, a constant and often uneasy dialogue with the subjects photographed. In doing so, they are, for the first time in their practice, addressing the multiple challenges of a project on memory: memory of place, memories of bodies, memories of the massacre. And they managed to accomplish all this in a country, the Republic of Haiti, where, apart from a few stubborn historian and civil society organisations, hardly any real work of public and official memorisation was done since the end of dictatorship.

When we think of memory, we generally accept the significance of the term as a given, without a deep understanding of its definition. But what is memory? And in what ways can photography contribute to a work of remembrance such as which is contained in this exhibition? Can a work of photography on memory become the carrier and creator of memory, transmitting and revitalising from a perspective that moves beyond the intention of the photographer?

Photography remains a fragmentary witness, partial, subjective, polysemic: a photograph tells us as much about the photographed subject as it does about its photographer. It remains an interpretation of reality that is never fully within our grasp. As American photographer Diane Arbus stated, “A photograph is a secret about a secret”. Furthermore, photography has infinite material physicalities: paper, cardboard, posters, etc., as well as infinite immaterial numerical values.

However, this versatility does not reduce its value as testimony and index, the “ça a été” (it was there) in the words of Roland Barthes, and it is precisely from this perspective that the photographers of the K2D collective have built The Kazal Project.

The photographs presented in this exhibition deliberately leave open all of these questions. Made as part of a master class I conducted for over three years and coordinated by Maude Malengrez, head of the media program of the Fondation Connaissance et Liberté (FOKAL), they are divergent and multiple but they certainly have a common goal: to make visible to Haitians as well as the entire world the multiple and contradicting living memories of one of the most tragic and major events in modern Haitian history: the Kazal massacre in 1969 under François Duvalier’s dictatorship.

These images restore this visibility through the valuable complementarity of a dual outlook. On one hand we are presented with the direct and indirect witnesses of facts, the places where this took place and the ways in which their memory is inscribed into the landscape as well as the everyday life of the inhabitants of Kazal. On the other hand, the perspective of five Haitian photographers who think, see, and photograph this memory, drawing from their own experience as Haitians, all of them part of the first post-Duvalierist generation.

In addition to the point of view of each photographer, the power of this project is in this multiple perspective which defines the narration from start to finish and is acknowledged as the fundament of the whole narrative. As a result, the visual storytelling reflects the specific relationship between the photographers and their subjects.

The creative process included various stages and degrees. For the photographers as well as for the photographed subjects, what ensued was a true encounter with Haiti’s troubled past that, to this day, has not yet been acknowledged. This achievement was also a long and complex personal journey, where the photographers were forced to navigate social, cultural, and geographical barriers. City dwellers of the capital came face to face with rural Haitian universe, “le pays en dehors”, literally “the country outside” as the countryside is often called in Haiti, naming the fact that although the country lives on the farmers contributions, they are barely considered nor properly taken care of in the economic, social and political system.

This journey was forged by the deep connection with the residents, on the trust built and nurtured over the course of the years between 2015 and 2018, on many successes and also failures. What ultimately prevailed was the unwavering determination to return to these same places, to listen, to show, to share, and to bring new research leads, new images, new witnesses for the dissemination of memory. As Édouard Glissant said, “Each and every one of us needs the memory of the Other, not because of virtuous compassion or charity, but because of a new lucidity that comes from the process of Relation. And if we want to share the beauty of the world, if we want to stand in solidarity with suffering, we must learn to remember together.” 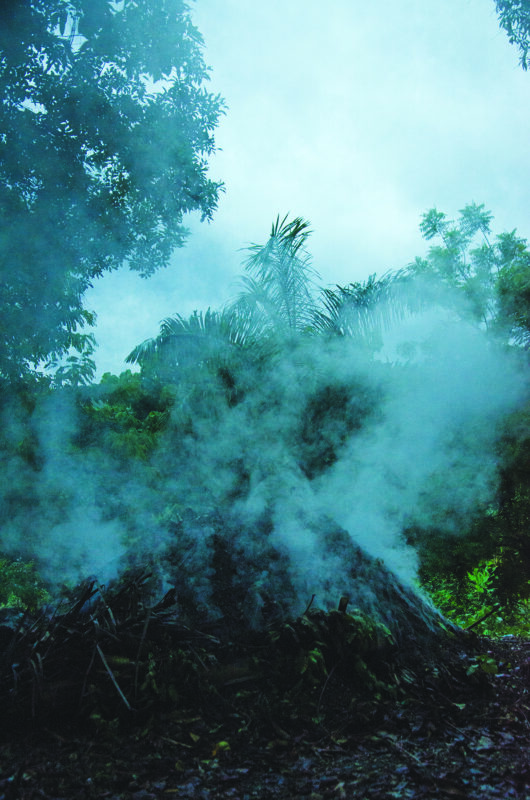