Digital Archive: From what will we reassemble ourselves

Once a temporary exhibition is over, it is almost impossible to capture the experience of visiting it or the feeling of seeing the artwork. Even more fleeting are the public programs organised for exhibitions which, unless they are recorded, are only available for a limited time.

However, due to our brief closures during the 2020 lockdowns in the Netherlands, Framer Framed has built up and archive of online content and events that you can still access.

For everything else we have compiled all the public programs and reviews relating to the Framer Framed group exhibition here in an exhibition online archive of From what will we reassemble ourselves (2020). As we reach the end of a tumultuous year and the end of the exhibition, you can now look back at all our programming from September 2020 to January 2021 in a comprehensive overview.

From what will we reassemble ourselves

A group exhibition conceived by Anna Dasović and curated by Natasha Marie Llorens. Exhibition design by Studio L A and Arna Mačkić.

From what will we reassemble ourselves initially began as a research project by Anna Dasović and Framer Framed. The group exhibition, curated by Natasha Marie Llorens expanded from Dasović’s work to include various critical approaches and perspectives from other artists. Framer Framed commission architect, Arna Mačkić and Studio L A to create a site specific exhibition design. Mačkić’s exhibition design was a response to Dasović’s ongoing research where the visitor is invited to move ‘between the walls’ of the memories of genocide and to focus on – in parts that have been broken open – other perspectives as yet untold. From what will we reassemble ourselves centres on the representation of the genocide that occurred in Srebrenica and its surroundings in Bosnia and Herzegovina 25 years ago, but also focuses on the more structural question of the representation of graphic violence.

Together, six contemporary artists, a team of researchers, and an architect consider a crucial question posed by Croatian-Bosnian author Jozefina Dautbegović: from what fragments – images, stories, archives, historical scraps – does one represent a life in the wake of genocide?
Read the poem: The Unidentified 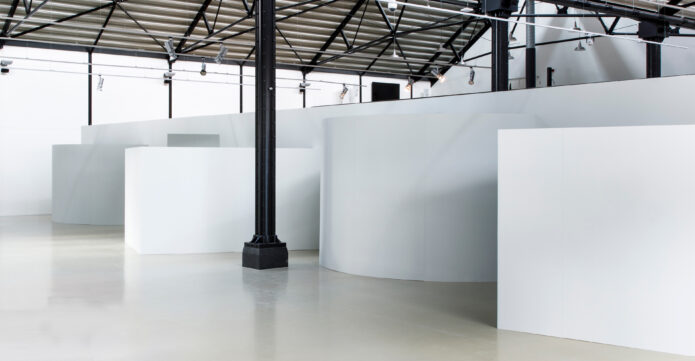 Additionally, you can read the exhibition catalogue, now available online to download, in Dutch and English, for more information about the exhibition, the participating artists, and their works.

Rather than write a limited introduction to From what will we reassemble ourselves in the exhibition catalogue, curator Natasha Marie Llorens was in conversation with Anna Dasović to address the difficult themes of the exhibition. You can now read this curatorial statement and conversation here.

The exhibition was a special event with two time slots for visitors throughout the evening. It was a double opening for the Temporary Monument: Srebrenica is Dutch History and From what will we reassemble ourselves. Our Framer Framed Friends were given exclusive early access to the exhibition, and a tour from the curator Natasha Marie Llorens, and artist Anna Dasović. Once the door were open to the public the director of Framer Framed, Josien Pieterse gave a welcome speech and introduction to the exhibition and the temporary monument. She interviewed Llorens and Dasović questions in a Q&A at the start of each time slot for visitors waiting to enter the architectural installation.

Click here to become a Framer Framed Friend and support our future public programs and exhibitions! 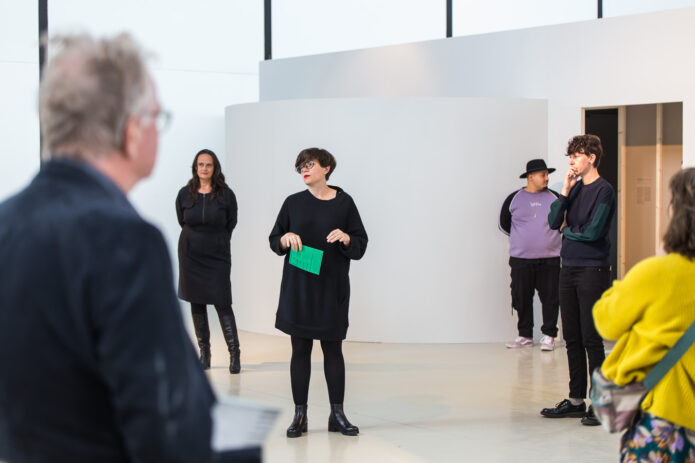 Curator Natasha Marie Llorens introducing the exhibition for Framer Framed Friends at the opening of ‘From what will we reassemble ourselves’ (2020). Photo: © Maarten Nauw / Framer Framed

Following on from the 25th anniversary of the Srebrenica Genocide which was hosted in the Hague on the 11th July, the opening of From what we will reassemble ourselves was paired with the opening of the Temporary Monument – Srebrenica is Dutch history.

As an exhibition in its own right, the temporary monument was a project conceived by the Bosnian Girl collective as part of their campaign and petition Srebrenica is Nederlandse Geschiedenis to have the Srebrenica genocide recognised as an important part of Dutch history. In fact, the anniversary commemoration is not organised by the Dutch government, and no permanent monument exists as of yet. The installation, design by Bosnian Girl, travelled from The Hague to Amsterdam along Oranje-Vrijstaatkade outside of Framer Framed. 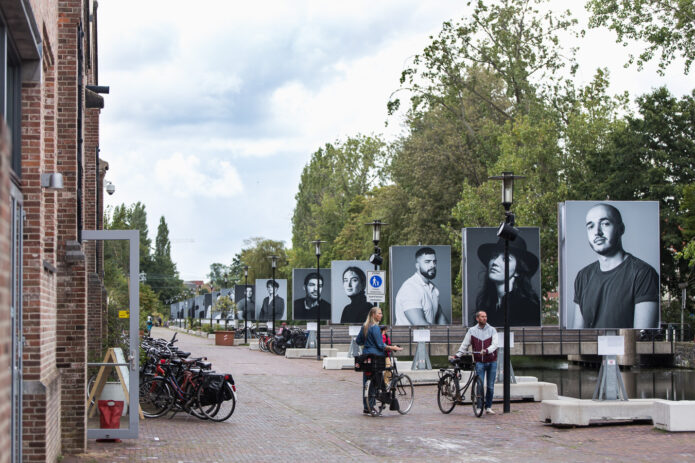 25 years after the genocide, the installation consists of large format prints of twenty-five photographic portraits of twenty-five-year-old Bosnian Dutch women and men taken by Robin de Puy with a caption written by Chris Keulemans. While several were born in Srebrenica or elsewhere in Bosnia and Herzegovina – one was born during the week of the fall – some were born in the Netherlands. Their double identity symbolises the interconnectedness of Dutch and Bosnian history. The exhibitions invite the viewer to both identify with and examine the position of the bystander to genocidal violence – the one who is often unnoticed or omitted from the historical frame, but whose witnessing lives on and colours our memory.

During the opening for From what we will reassemble ourselves visitors could walk along the canal and experience the temporary monument together with the exhibition.

For the 25th anniversary of the Srebrenica genocide on the 11th July, Chris Keulemans interviewed Adnan Jelacic, who was photographed for the monument, about his experience and life in the Netherlands. This interview is in Dutch and available to watch on the Framer Framed YouTube channel.

On Sunday 18th October, for the closing of the Temporary Monument – Srebrenica is Dutch History, Framer Framed organised a walking tour led by Chris Keulemans. Local people from the neighbourhood were also invited to learn more about the installation that had occupied their street.

Ena Sendijarević, a member of Bosnian Girl collective and one of the subjects of Robin de Puy’s photographs, shared her personal memories and thoughts on the Srebrenica is Dutch History campaign. 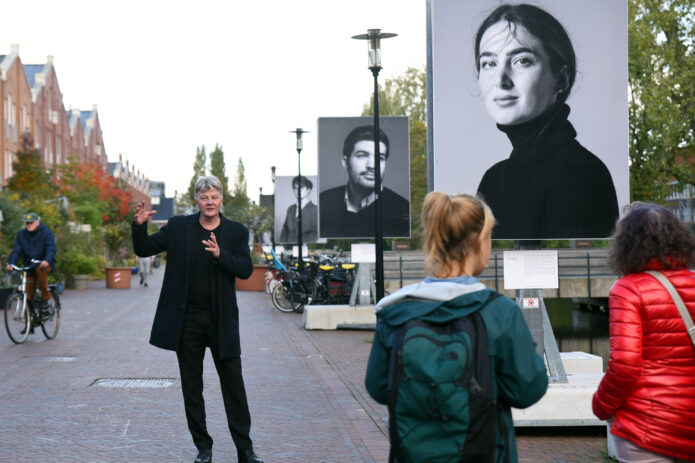 As part of the exhibition, Framer Framed is presented an accompanying online film program curated by Natasha Marie Llorens. The program remains centred on the genocide at Srebrenica but it also widens the focus outwards towards artworks that deal with the representation of violence more broadly.

From the 17th November, the film works of three different artists, Selma Selman, Dania Reymond and Damir Avdagić, were freely accessible through Framer Framed’s website for a week. Additionally, to launch each film there was an online-streamed conversation between the exhibition curator Natasha Marie Llorens and each artist.

The online film program was kicked off by Selma Selman who presented a pair of videos. Selman was one of the participating artists from From what we will reassemble ourselves, presenting her work Superpositional Intersectionalism (2020). She utilises her Roma origins as a lens through which she can understand the universal human condition and its idiosyncrasies. 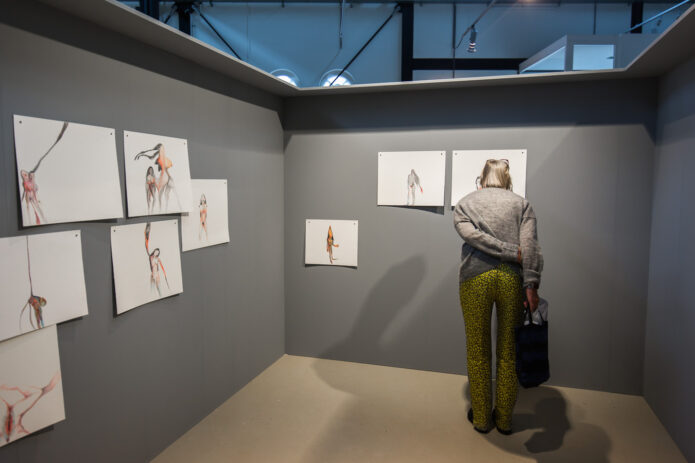 Selma Selman’s Superpositional Intersectionalism (2020) at the opening From what will we reassemble ourselves Photo: Maarten Nauw, Framer Framed

Her film, SALTWATER AT 47 (2015-2016) is a short video showing the artist’s mother first encounter with the Adriatic Sea, which was also her first encounter with the sea in general. The second in the program, Mercedes Matrix (2019) is the ten-minute documentation video of a performance the artist made with her family in Bosnia and Herzegovina. It shows the artist and three male relatives taking a Mercedes car apart for salvage. Both works refer to the on-going prejudice and structural violence against the Roma community in Bosnia. Read more

On the 19th November, Natasha Marie Llorens interviewed Selman about her films and her body of work commissioned for the exhibition From what will we reassemble ourselves.

Borrowed Landscape #1 (2011) is a short documentary film shot in Srebrenica in Bosnia and Herzegovina. The voice over is made up of different people describing a painting by Pieter Bruegel the Elder, the Massacre of the Innocents (c. 1565–1567).

Reymond’s subsequent film, Borrowed Landscape #2 (2013), is roughly the same length and shot in Bentalha, a southern suburb of the Algiers that was the site of a massacre in 1997. The film has two points of reference: a famous photograph by Hocine Zaourar, ‘The Madonna of Bentalha’ (1997), and another painting by Pieter Bruegel ‘The Elder, The Triumph of Death’ (1562). Taken together, Reymond’s films present a study of the representation of violence spanning continents and centuries centered on the figure of the bystander—the one who is present for the event and the one who watches it through the camera/painting frame. Read more

The conversation between Llorens and Franco-Algerian filmmaker Dania Reymond-Boughenou was streamed in French with English subtitles on the 27th November.

Artist Damir Avdagić’s Retelling #1 (2011) was shown online for this program as a 6-minute single-channel video. One panel of the video shows an image and the other a text projection. The image depicts a woman and a man alternately in a darkened space as each is shown lighting a sparkler and letting it flicker to the end of its fuse. The accompanying text consists of material drawn from interviews with the artist’s parents in which they describe the asylum centre at which they first arrived after fleeing the violent unrest in Bosnia.

Retelling #1 is paired with a second video by Avdagić entitled Citanje (Reading) (2013). In this 13-minute video a voice reads a letter aloud. This letter fills the frame of the camera and rustles softly in the hands of the speaker. It was sent by the artist’s father and narrated by the artist, describes the former’s escape from Bosnia during the conflict in the 90s. The reader’s voice is marked by mispronunciations, stuttering, slips and repetitions and his inability to properly speak his native language.

Both works grapple with the failure of representation; neither the people nor their speech is fully graspable, fully comprehensible. The artist suggests that the inadequacy of representation is due in part to the trans generational effects of historical violence. Read more

The interview between Avdagić and the Llorens from the 3rd December is available to watch online in English.

Take a tour of the exhibition with curator Natasha Marie Llorens and initiator Anna Dasović with our online series! As part of the online finissage of the exhibition, Framer Framed released individual videos of the artworks during the lockdown period.

See the episodes for other artists on the Framer Framed YouTube channel:

Read these great reviews about our exhibitions From what will we reassemble ourselves and Temporary Monument – Srebrenica is Dutch history in some of the Dutch media and online platforms: Jegens & Tevens, Het Parool, Volkskrant, Mister Motley, Trouw, De Kunstmeisjes and De Wittle Raaf.

For more information about From what will we reassemble ourselves check out the main webpage here.

Credits
A group exhibition conceived by Anna Dasović and curated by Natasha Marie Llorens. Exhibition design by Studio L A and Arna Mačkić.

The title of the exhibition is derived from Jozefina Dautbegović’s poem The Unidentified (2003).

Special thanks to
Van Abbemuseum

Exhibition: From what will we reassemble ourselves

Opening: From what will we reassemble ourselves & Temporary Monument

Guided tour: From what will we reassemble ourselves