As part of the exhibition From what will we reassemble ourselves, Framer Framed is happy to present an accompanying online film program curated by Natasha Marie Llorens. The program remains centered on the genocide at Srebrenica but it also widens the focus outwards towards artworks that deal with the representation of violence more broadly. Starting on the 17 November, the film work of three different artists will be freely accessible through Framer Framed’s website. Additionally, each week there will be an online-streamed conversation between the exhibition curator Natasha Marie Llorens and each artist, starting with a talk with Selma Selman on the 19 November at 19:00.

Selma Selman, who produced a body of commissioned drawings for the exhibition, presents a pair of videos. SALTWATER AT 47 (2015-2016) is a short video showing the artist’s mother first encounter with the Adriatic Sea, which was also her first encounter with the sea in general. Mercedes Matrix (2019) is the ten-minute documentation video of a performance the artist made with her family in Bosnia and Herzegovina. It shows the artist and three male relatives taking a Mercedes car apart for salvage. Both works refer to the on-going prejudice and structural violence against the Roma community in Bosnia. 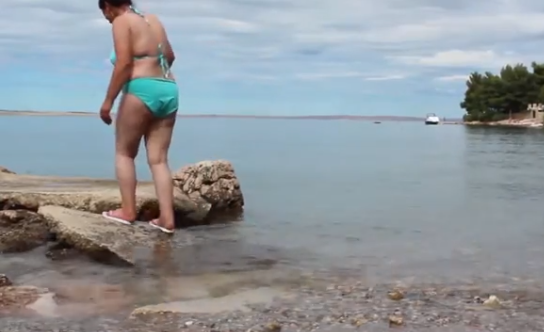 SALTWATER AT 47 refers to the age of Selman’s mother when she received her first passport and the ability to cross the border separating Bosnia and Herzegovina from Croatia and thus from the sea. Selman’s mother identifies as Roma and was born in 1967 in the part of the Former Yugoslavia that would become Kosovo in the early years of the new millennium. At thirteen, she moved into the Bosnian territory to live with her common-law husband’s family. The couple was never married under Yugoslavian law and therefore she was never granted legal residence in Bosnia. When that republic dissolved, she was left stateless. After years of negotiation with the government of Bosnia and Herzegovina, she was finally granted a civic status and papers in 2014. Selman celebrated the occasion by offering her mother a vacation by the seaside in Croatia.

The video is shot like any other video of a family vacation. Its tone is light, familiar. The artist’s mother is nonplussed by the taste of the water. The undercurrent of tenderness belies the overlapping territorial wars and state discrimination against the Roma people that make this moment hard won. 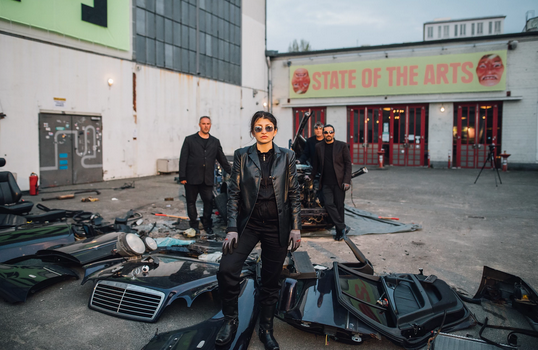 Mercedes Matrix is a recent performance by Selman about her family’s work in auto parts and metal salvage under the current economic conditions in Bosnia and Herzegovina, which was in a crisis even before the COVID-19 pandemic. Precarity is especially acute for the Roma community to which Selman and her family belong because they live largely without government assistance or access to the country’s limited infrastructure. Selman conceives of the performance as a way to integrate the labor that supports the family with the economy of art. Performing this labor produces two parallel forms of value simultaneously.

All the participants of the performance are dressed for the occasion in dark suits and polished dress shoes that match the black Mercedes sedan they are taking apart. They wear latex coated workman’s gloves and dark sunglasses. They all work methodically. The seats, doors, hood and metal side panels are detached from the body of the car and carefully laid out in a row. The artist works alongside her relatives and her voice can also be heard over the sound of their work expounding on the economic conditions for the Roma in Bosnia today. When the largest pieces of metal have been removed, the men’s approach becomes more destructive. They pummel the engine block with axes to loosen its casing and break it apart. They smash the windows in so that they can break the car hood off the body. It is a performance about the dismemberment of a dream of economic prosperity as much as it is about labor.

This online event is free and in English.
Text by Natasha Marie Llorens.

Exhibition: From what will we reassemble ourselves

Digital Archive: From what will we reassemble ourselves