Exhibition: Speaking from the Heart - The Polemic Sensibility from Iran

Framer Framed presents the exhibition Spakeing from the Hearti, curated by Shaheen Merali, at Castrum Peregrini in Amsterdam. The exhibition is a result of a curatorial decision to raise awareness of the development in Iranian aesthetics as part of the political and cultural reality of this country.  It is sourced from the inevitably finite series of creative works that came from Iran in a period when artists felt they needed to further question their experiences of reality at the time of the tenth presidential election, which was held on 12th June 2009.  Millions of Iranians gathered in Iranian cities and around the world in post-election protests and further inspired the emergence of the opposition Iranian Green Movement.

The actual, as well as the mental journeys towards being excluded  – often feeling confined – produced new identities based on introspection, often producing an auto-critique of the lack of progress in their lives. The volatile condition within and without, the confusion, the bewilderment and the total failure of the system gave way to doubts and led to a collective sense of disillusionment with the whole.

This cultural awakening, constructed in images and text, thread and paint, video and graphics reflects the increasing place of protest and activism, but, more significantly, the works are engaged with how these visual encounters further the scope of Iran’s contemporary language – deliberate, considered and, at points, provocative in its poetic demand.   Curiosity re-establishes the demand to connect with the harsh reality of everyday life within a critical artistic discourse.

This exhibition speaks from the heart of Iranian sensibility.

The artists and their works in this exhibition were selected for both their thinking and their making, providing in summation a reflexive archive of their communal plight; a response based on observations of the increasing destruction of its core values and the lack of transparency that envelopes their possibilities. This cultural awakening, constructed in images and text, thread and paint, video and graphics reflects the increasing place of protest and activism, but, more significantly, the works are responsible engaged in how these temporal visual encounters further the visual tropes of Iran’s contemporary language- deliberate, gauged and, at points, provocative in its poetic demand. A curiosity that re-establishes the demand to connect to the harsh reality within a critical artistic discourse, speaks from the heart of the polemic sensibility of Iran. 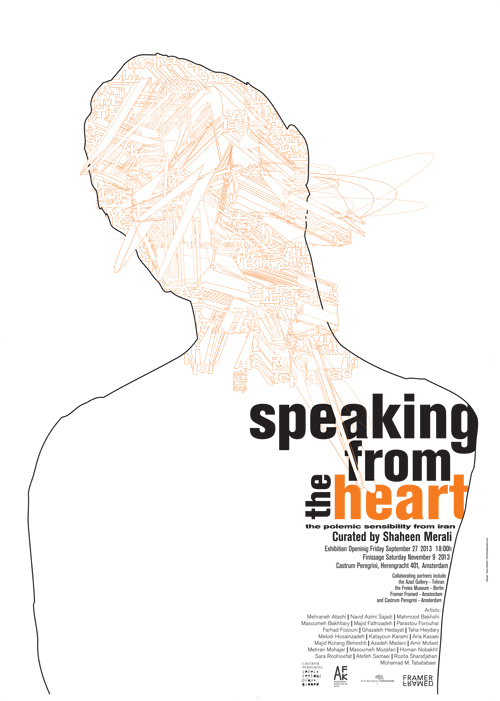 Parners
The exhibition was made possible with the support of the Prins Bernhard Fonds, and will be accompanied by a side program with a lecture, film screening, panel discussion, poetry evening and artist talk. Collaborating partners include the Azad Art Gallery – Tehran, the Freies Museum – Berlin, Framer Framed – Amsterdam and Castrum Peregrini – Amsterdam. Special thanks to Persian Dutch Network. Parts of the exhibition continued to be on show at the Vienna University of Applied Arts in Austria where they where part of the group show Fragile Hands – A Curatorial Essay on Stated Subjectivities curated by Sharine Merali. A review of the exhibition can be found at {al.arte}.

A performance by Alireza Keymanesh.

Programme 'Speaking from the Heart'

Every Tuesday evening during the duration of the exhibition an extensive program with artists, activists, scientists and social organizations will be organized.

Video item: Speaking from the Heart - The Polemic Sensibility from Iran