How much of this is fiction at FACT, Liverpool

The traveling exhibition How much of this is fiction involving artists as tricksters and featuring work which involves the direct use of deception, tricks, hoaxes and hacks. These politically inspired media artists use trickery and deception to exploit the shifting boundary between fiction and reality in a world of ‘post-truth’ politics.

How much of this is fiction (2017) focuses on politically inspired media art that uses deception in all its forms. At the heart of the exhibition is the desire to address one of today’s most urgent political issues: the radical shift in the boundary between fiction and reality in public discourse, in a world increasingly governed by ‘post-truth’ politics. How much of this is fiction. shows the artist as ‘dark jester’, as trickster, using a variety of hoaxes, hacks and ruses to reveal the hidden workings of power structures and the possibility of alternative futures.

As well as acting as a timely reflection on the nature of truth in a time filled with fake news, misinformation, and tactical propaganda, the show also serves a historical purpose. Many of the high-speed media interventions showcased in the show are, to a degree, legacies of ‘Tactical Media’; a cultural and political movement that flourished in the late 90s. Tactical Media was the first to combine the power of art, the practices of PR and advertising worlds, and an experimental approach to digital media, to mount hit-and-run interventions in the media sphere aiming to create chaos as a means of generating political opportunity.

The artists showcased as part of How much of this is fiction are united in their underlying purpose of engaging with urgent social and political events. The show includes ambitious restagings of installation works by Maia Gusberti, !Mediengruppe Bitnik, and UBERMORGEN, as well as exciting new commissions by Morehshin Allahyari, HeHe, and artist-designer Ruben Pater.

Ruben Pater has commissioned by Framer Framed to produced a new graphic and spatial design for the exhibition at the three venues. Grounded in a strong activist history (particularly relating to the ways in which the media covers moments of political unrest) and ideas of containment, his graphic design engages with themes of political protest, systems of control, and acts of obfuscation.  How much of this is fiction. will show how the influence of this media movement remains all around us. Whether it be the social media meme tactics of political extremists, the live streaming of police shootings to social and mainstream media platforms around the world, Trump’s midnight tweets, the exposure of the surveillance state through Snowden’s actions, or information unveiled by Wikileaks, it is clear that the critical role of ‘do it yourself’ media politics is as crucial as ever.

As If: The Media Artist as Trickster was on show at Framer Framed, Amsterdam (NL) between January 20 – March 5, 2017, at FACT (Foundation for Art and Creative Technology) Liverpool (UK) between 2 March – 31 May 2017 and at HeK – House of Electronic Arts, Basel (CH) between March 21 March – May 21 2017 with a change of exhibition title to How Much of this is Fiction. 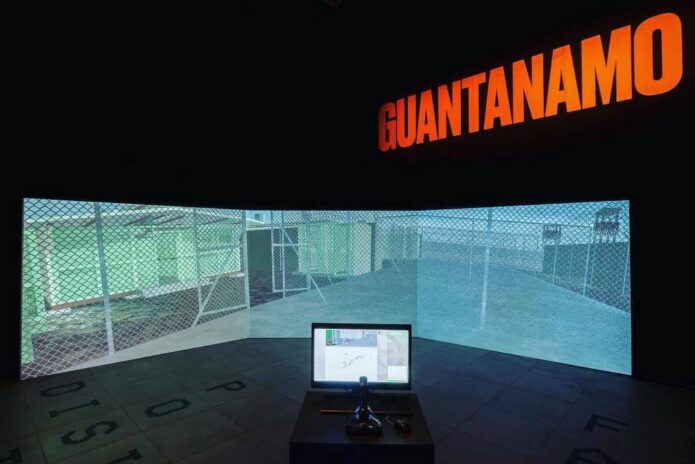 The artists in the How much of this is fiction. are what we are calling media tricksters and ‘dark jesters’, who use fiction as a method to unmask, subvert and satirise the workings of power, or to create the possibility of alternative futures by using fictional scenarios to act ‘as if’ change had already occurred. In a series of short talks followed by dialogue with the curators, the artists will explore how their tactics can be differentiated from the deliberate use of fake-news by the insurgents of the new ‘alt-right’.

The works featured in How Much of this is Fiction. are related to Tactical Media, an influential movement that flourished in the 1990s that fused art, political campaigning and an experimental use of digital media. In the intervening years the political importance of these kinds of DIY media interventions have been hotly disputed, with some seeing them as a distraction from ‘real’ politics, whilst others see Tactical Media as an important weapon in the battle for the ‘social mind’.

Writer and researcher Florian Cramer shares some of his research into little known factors influencing the rise of the alt-right – a segment of right-wing ideologies presented as an alternative to mainstream conservatism in the US. His presentation maps the emergence of this large white supremacist subculture, shining a light on the complex origins of the cultist language and image codes adopted by the movement.

The alt-right presence has grown on message/image boards such as 4Chan and 8Chan through its appropriation of the meme, and managed to achieve significant cultural dominance, transforming their own brand of meme culture into a powerful and tangible tool. Cramer’s research has not only charted the successes of this unexpected online activity, but has also illustrated the apparent lack of any equivalent sub-cultural energy on the left.

From Trump and Pepe the Frog, to Kek (the Egyptian God of chaos), Cramer’s lecture will challenge the shallow discourse of fake news and ‘post-truth’, which creates a smoke screen covering the actual dynamics at play, and in doing so will course the continual popularity of ‘Fashy’, or ‘fashionable fascism’.

Join Annet Dekker and David Garcia, curators of How much of this is fiction, for a tour of FACT’s ambitious new exhibition. Find out more about the concepts behind the works exploring the radical shift in boundary between fiction and reality, in a world increasingly governed by ‘post-truth’ politics.