A symposium on the influence of historical preconceptions on museum policies and presentations. An international panel will compare art institutions from several countries, and how they deal with their colonial past in exhibition making.

Comparing two case studies in the Netherlands
Over six years ago, at the start of 2003, the Tropenmuseum (part of the Royal Tropical Institute, Amsterdam) opened their permanent presentation Eastward Bound! Art, Culture and Colonialism (Oostwaarts! Kunst, cultuur & kolonialisme). Showing pieces from its core-collection, the Tropenmuseum recapitulated its own history and the colonial past of the Netherlands in Indonesia. With this new interpretation of it’s own history and collection, the Tropenmuseum illustrated the changing perception of our colonial occupation overseas and its thorough entanglement with Dutch culture. 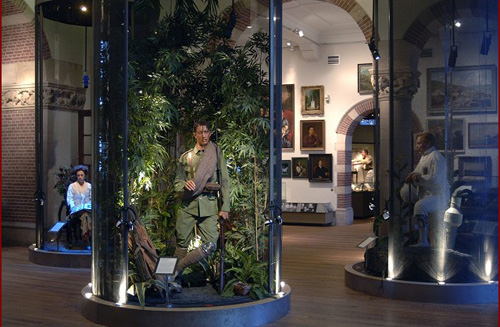 The exhibition Eastward Bound! Art, Culture and Colonialism was an important step towards the formulation of a post colonial discours in the arts. Six years later, we ask the question how has this discours developed? How do we deal with non-european art, collected or looted within the colonial context? How do we deal with collections that carry a colonial relation? These collections are the material of many curators; how do they avoid the reproduction of racist views and connotations embedded in the collection into contemporary exhibitions?

Recently the Centraal Museum (Utrecht, NL) opened the exhibition Beyond the Dutch – Indonesia, the Netherlands and the Visual Arts, from 1900 until now(2009), curated by Meta Knol and Enin Supryanto. This exhibition also deals with the mutual influence between Indonesia and the Netherlands, but more from an artistic perspective.

Both exhibitions give rise to a discussion initiated by Framer Framed about the colonial perspective(s) of Dutch art institutions. Point of debate is the influence of historical preconceptions on the view of contemporary art. An international panel will compare art institutions from several countries, and how they deal with their colonial past in representing contemporary art.

Follow by a panel discussion, hosted by Chris Keulemans.