From June to September, Framer Framed in collaboration with the Goethe-Institut Niederlande, will host a series of four events focused on the global climate crisis as it intersects with our ongoing crises. Chapter 2 of the Crisis Imaginaries series will be an online panel event with Chihiro Geuzebroek, Asuka Kähler and Raki Ap, moderated by Amanda Boetzkes. 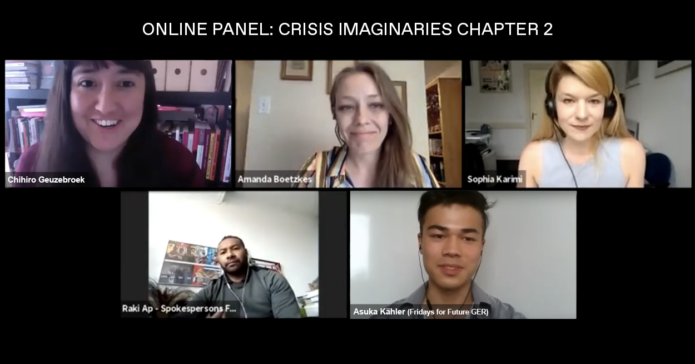 Chapter 2 of the Crisis Imaginaries series focuses on intersectional crisis talks. As the climate crisis extends from our social systems, we must be vigilant for the ways in which social inequality and institutional racism trace through our environmental politics. How do we actually redistribute planetary wealth and what role does restorative justice play? As Climate Justice movements in a Western-European context, like Fridays for Future, have been called out in the past for being predominantly white and from a privileged background, we want to reflect on that accusation and further the discussion toward an activism that considers histories of colonial and racist violence and their present entanglements with the current climate crisis from a systemic and pragmatic perspective.

How can practices of listening bring forward an environmental justice that becomes aware of amnesiac celebrations of wilderness dependent on nationalist, racially blinkered, and gender entitled frameworks? How can we engage a politics of visibility within climate justice movements to shatter systemic exclusions? Whose stories have we heard so far and to whom do we need to listen to now?

Together, we ask: what is intersectional climate justice?

As the world shifts and shutters in response to the Covid19 pandemic, many have reasserted the importance of responding to climate change at a similar scale. We have watched the two crises intertwine, with early indicators showing a correlation between environmental degradation and an increased chance of animal to human virus contagion; likewise, more severe cases of Corona often appear and affect areas suffering from worse air pollution, with the same patterns of vulnerability exacerbated. What can we learn from our current crisis and take with us for our present and future crisis? What alliances can be formed across art, activism and academia? Together, we will critically examine the notion of crisis as a spectacle that calls for strong leadership, threatening to devolve toward authoritarian tendencies, and as a narrative constructed from differential viewpoints.

Video registrations of the series can be found here.

This event is FREE and in ENGLISH.The livestream will be uploaded to our Youtube channel. We will be gathering questions from the audience for the panelists via social media.

Crisis Imaginaries, Chapter 5: On Slow Violence and the Anti-Spectacle