Here you can find information about the development and first presentation of the CICC at Framer Framed, Amsterdam. Together Framer Framed, D'Souza and Staal created the installation, organised the Public Hearings, an Educational Program and activated the space of Framer Framed for related public program.

Commissioned by Framer Framed, D'Souza and Staal developed the exhibition in the form of a “more-than-human tribunal” to prosecute intergeneration climate crimes.

The legal framework of the CICC is based on D’Souza’s book What’s Wrong with Rights? (Pluto Press, 2018), a critical analysis of neoliberal legal institutions. Rather than thinking of rights as individual property, D’Souza proposes to rethink the current rights regime to acknowledge the interdependent nature of humans and non-humans in shared ecosystems. If the rights of a river are harmed, the rights of all animals, plants and humans living in interdependency with that river in present and future are harmed as well. Rights can thus never be individuated, but must be considered as interdependent and intergenerational. When considered in that way, the concept of rights transcends the meanings that capitalist modernity gives to them.

The CICC brings together a wide range of disciplines, not only between law and art through the central collaboration of D'Souza and Staal, but also through the collaboration with architect Paul Kuipers and designer Remco van Bladel, as well as between the various judges and witnesses who participate in the court’s public hearings – from artists to activists, climate scientists and research collectives.

The presentation of the tribunal within the exhibition space transformed Framer Framed into a social domain, and the broad public reached through this court-as-art-work is provided with a framework in which they can both reflect and act. 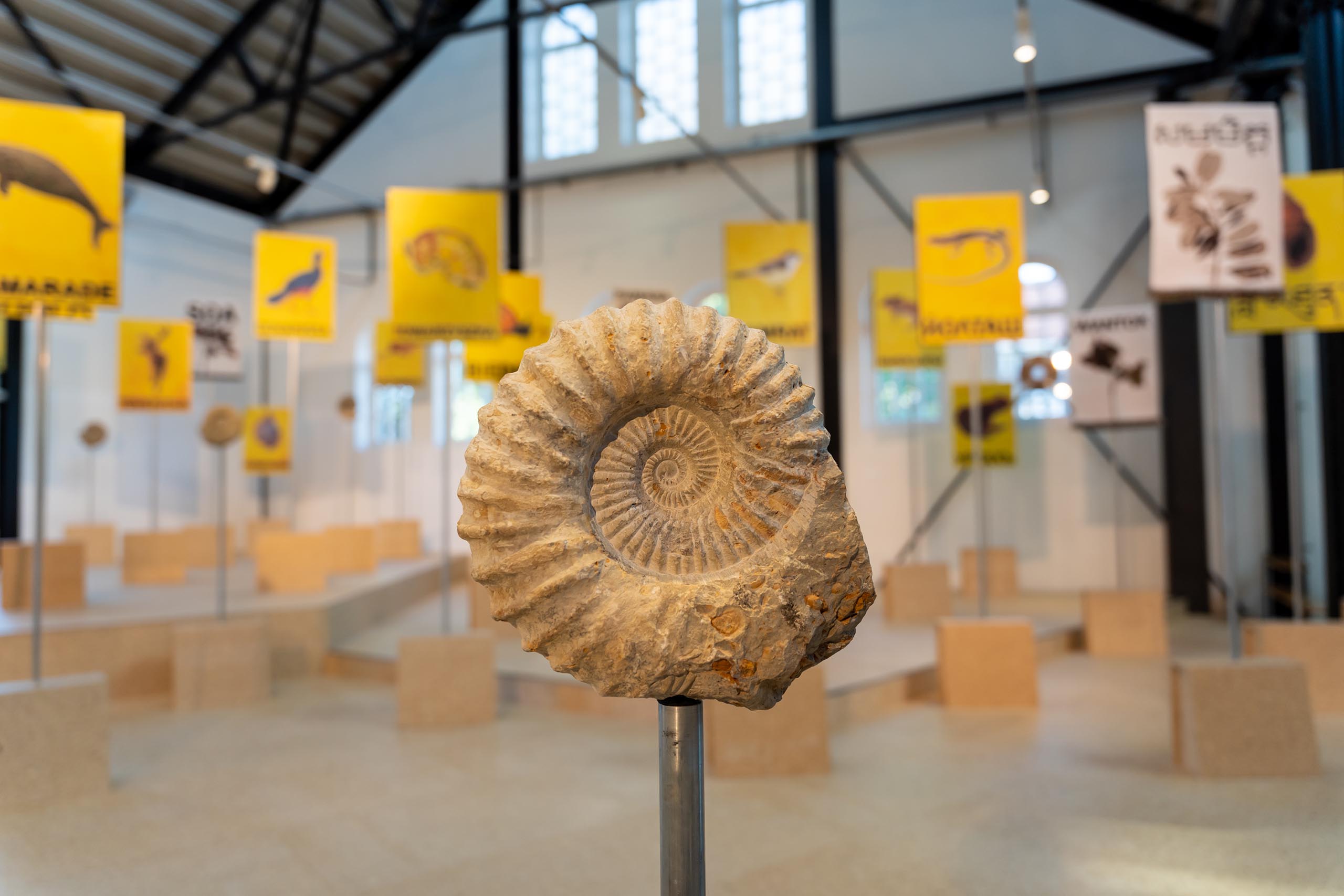 You can find more information on the opening here.

The CICC kicked off with the participation of Radha D’Souza and Jonas Staal. The project opened with an inauguration of the tribunal on the 24th of September. After a warm welcome by Framer Framed co-director Josien Pieterse, D’Souza and Staal introduced the project to both live and online audiences and answered questions from the public. 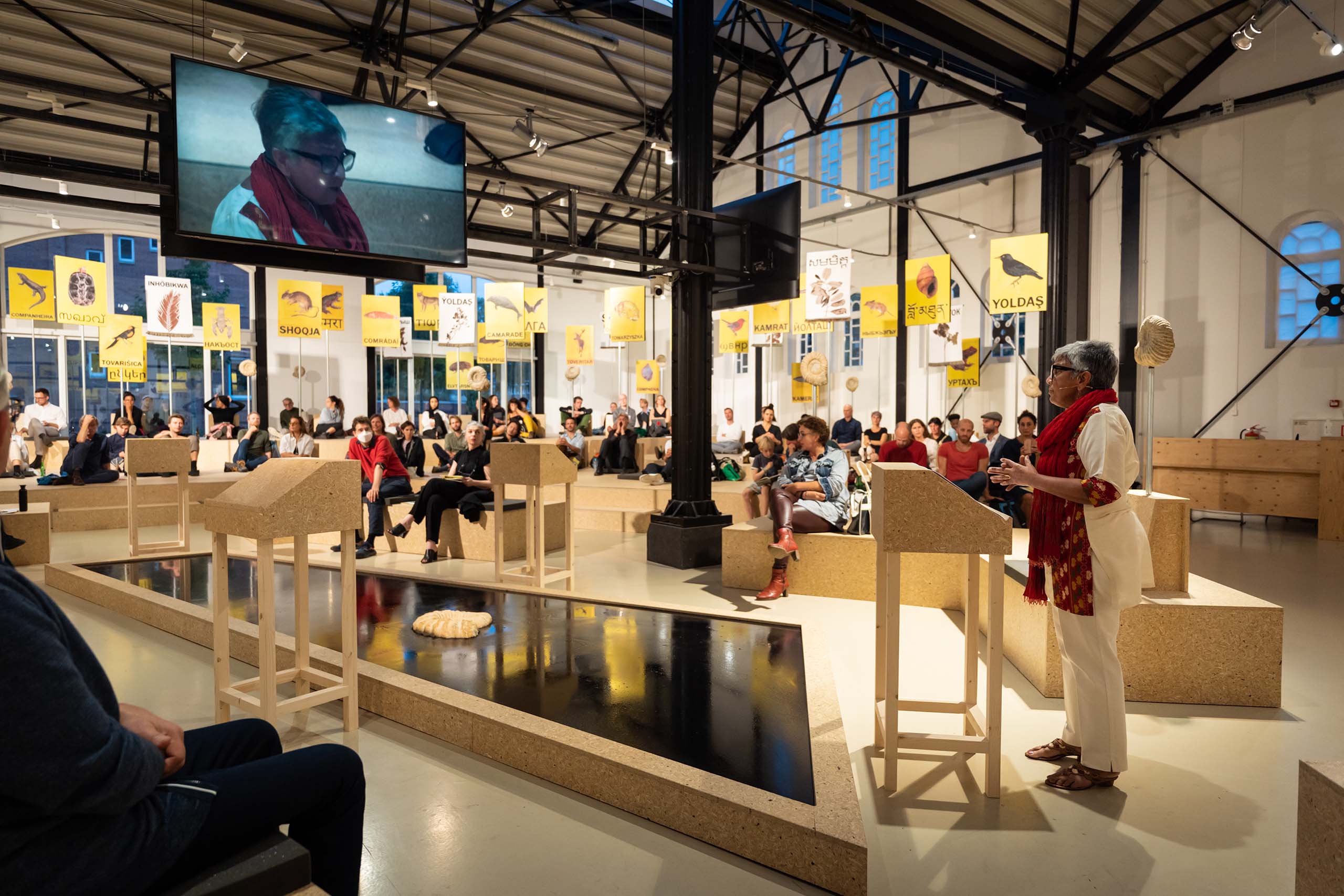 The installation took the form of a fragmented wooden construction, that is modelled as a landscape within the exhibition space of Framer Framed, developed in close collaboration with architect Paul Kuipers. It manifested as a curve of different heights, with a site of assembly at its centre, where prosecutors, witnesses and judges oversee public hearings against transnational corporations and states accused of intergenerational climate crimes.

The court was permanently inhabited by various extinct species. The centre of the court consisted of a pool of refined oil – fossil fuel – with a stone ammonite fossil placed in the middle, a family of octopus and squid that perished in the 5th mass extinction 66 million years ago, just as we are facing the 6th mass extinction in the form of the present ecosystem collapse. The extinct animals take the form of sixty-five paintings of various animal species that became extinct due to climate crimes, from the colonial era to the present, which in the installation are printed on canvas and mounted on various signs. On the signs, each animal is named “comrade”, in different languages.The use of the word “comrade” indicates their political agency, as fellow ecosystem workers, with whom humans live in interdependency.

When the Court for Intergenerational Climate Crimes (CICC) was not activated for hearings or larger gatherings, a video was played on a continuous loop on the four main screens at the centre of the installation. Narrated by Radha D’Souza, the video introduces the alternative legal framework of the CICC, which not only brings into evidence climate crimes of the past, but equally, prosecutes climate crimes on behalf of unborn human and non-human comrades of the future. 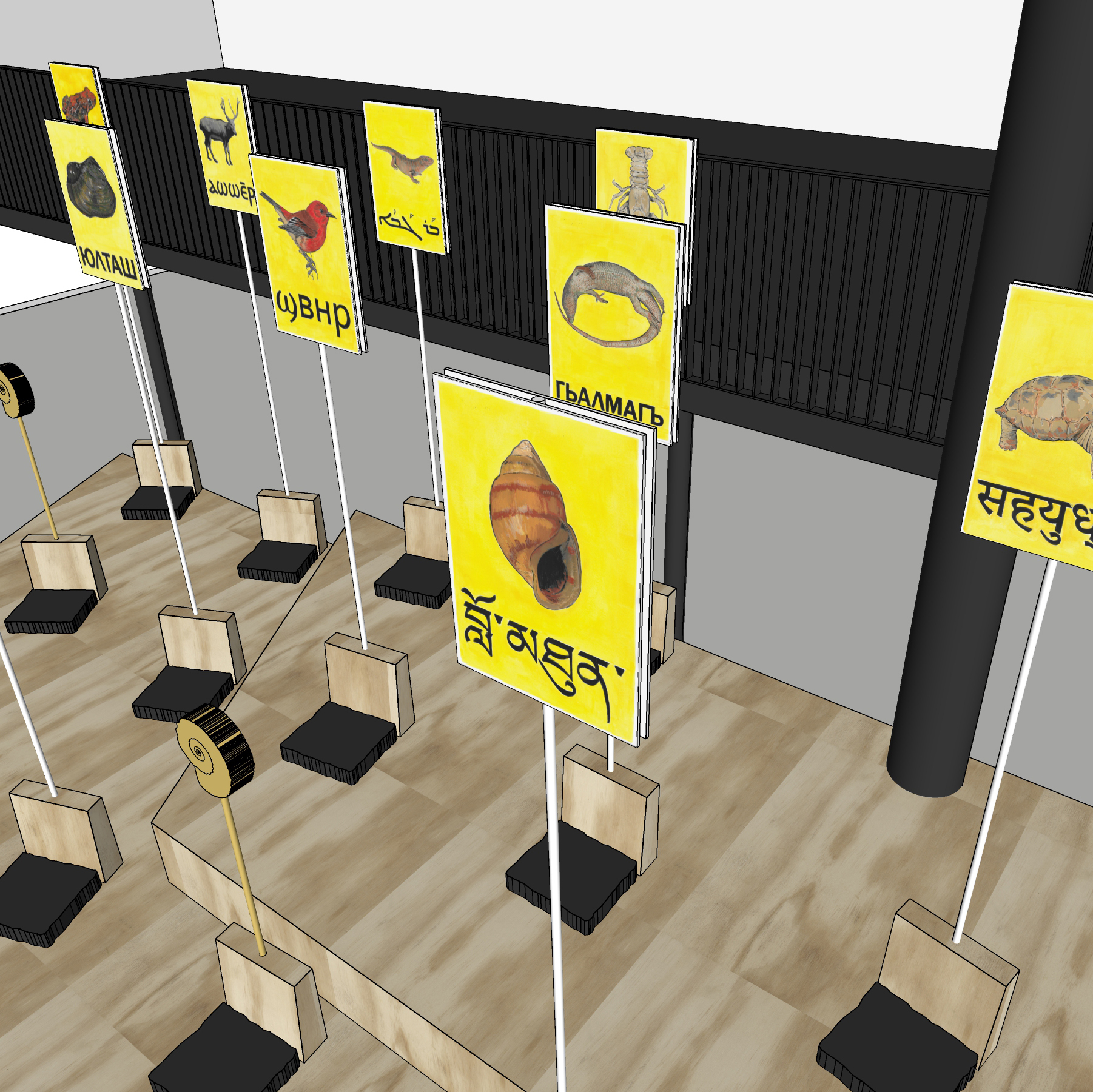 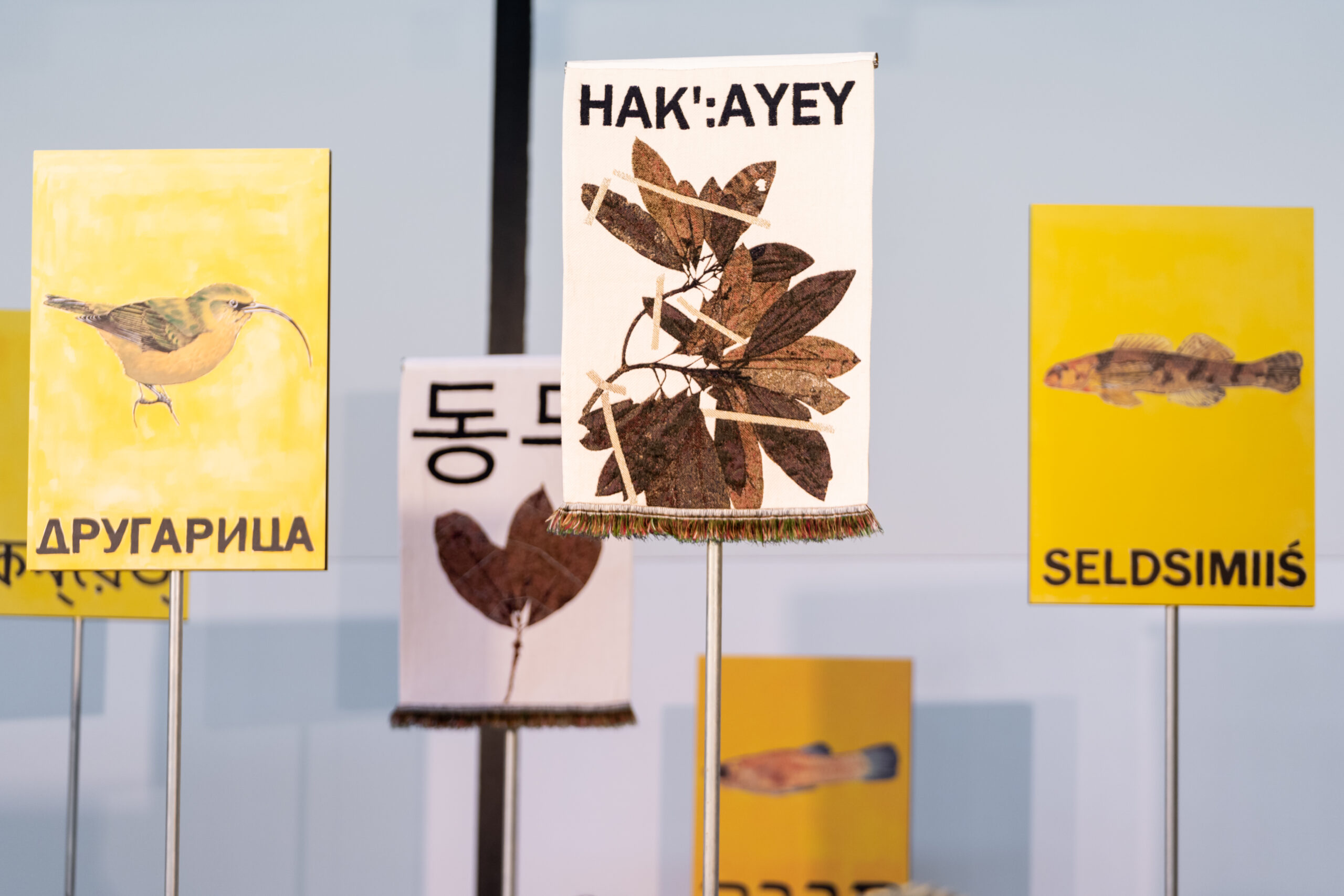 Besides the installation and hearings, the CICC was also a place for lectures, education and public use. This included public events and an education program, both co-ordinated by Framer Framed. The educational program included organising five sessions with primary schools and three sessions with high school students focusing specifically on the core themes of intergenerational climate justice. The CICC was also made available for public use by groups and platforms, such as Extinction Rebellion and Embassy of the North Sea, involved in relevant topics to ensure a broader local, national and international engagement with the project.

To see what was hosted in the CICC, check out the agenda from the exhibition.