Framer Framed and State of Concept in Athens would like to invite you to an online premiere of the film ‘About the footprints, what we hide in the pockets and other shadows of hope’ by activist Russian collective CHTO DELAT made as part of the public programme of their solo exhibition in Athens. The film will premiere simultaneously on the 9th of June at 20:00 for the Netherlands and 21:00 for Greece and St. Petersburg via Framer Framed’s YouTube channel. 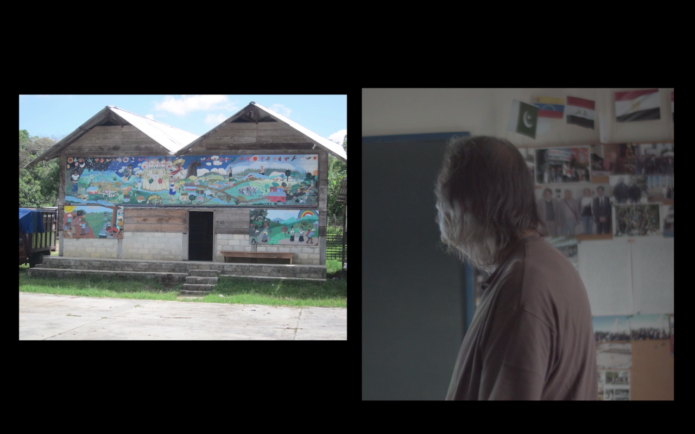 A still from the film ‘About the footprints, what we hide in the pockets and other shadows of hope‘ (2021) by CHTO DELAT

About the footprints, what we hide in the pockets and other shadows of hope
Live-stream link: https://www.youtube.com/watch?v=_xc-utKe8Ck
Language: Greek
Subtitles: English

The 84-minute film is the outcome of CHTO DELAT’s experimentation with integrating key texts by Zapatista spokesperson Subcomandante Marcos within the educational process of learning the Greek language. Along with a seminar delivered by architect Stavros Stavrides in the Open School for Migrants in Piraeus, in which he described the strong relations between the Zapatista movement and political activism in Greece, this process created a new paradigm of learning — somewhere in between real and imaginary concepts.*

CHTO DELAT was founded in early 2003 in St. Petersburg by a workgroup of artists, critics, philosophers, and writers from St. Petersburg, Moscow and Nizhny Novgorod with the goal of merging political theory, art and activism. The name of the group, meaning what is to be done?, derives from a novel by the Russian 19th-century writer Nikolai Chernyshevsky.

State of Concept Athens is the first non-profit contemporary art institution with a permanent location and a yearly program to operate in Greece. Founded in 2013 by art critic and curator iLiana Fokianaki and based in the neighbourhood of Koukaki at the centre οf Athens, it is an independent platform that fosters the appreciation for local and international contemporary art and the growth of artistic and curatorial practice.

The Piraeus Open School for Migrants is a voluntary based association which works on educational and training support for the cultural advance of immigrants, refugees and vulnerable social groups in Greece.

*This film forms a part of the ongoing project “Slow orientation in Zapatism” which reflects how the ideas of Zapatism have influenced different communities outside Chiapas. The first part was realised in Russia and the second part in Italy.

About the footprints, what we hide in the pockets and other shadows of hope has been realised in collaboration with the Open School for Migrants in Piraeus (Athens, GR) and co-produced by State of Concept Athens, Framer Framed Amsterdam and Momentum.