From 22-24 October, Framer Framed invites you to When the roots start moving, a series of public programs on Zapatismo imaginary and pedagogy by Russian activist collective CHTO DELAT. Based on CHTO DELAT’s extensive research and practice, which adopts Zapatismo as a lens for self-reflection, this series offers a space for discussions of solidarity, alternative imagination, and emancipatory tools in contexts of social and ecological crisis.

The book presentation will focus on the first essay within the collection When the roots start moving: Chto Delat and Free Home University. The essay investigates predicaments of rootedness and rootlessness, as well as notions of belonging and displacement across different geographies. Zapatismo—the insurgent movement of Indigenous peoples from Mexico—emerged as a form of belonging, a home (or a homecoming) for our hopes and political imaginaries, providing a praxis to learn from and with. The contributors of this book offer their understanding of the Zapatistas’ movement without romanticising or objectifying their struggle for Autonomy.

The book extends the research and practice of artistic collective CHTO DELAT, who adopt Zapatismo as a lens of self-reflection and highlight how the Zapatista imaginary continues to inspire those who are looking for emancipatory tools: through art, language, radical pedagogy and conviviality, as a practice of commoning and collectively reimagining an otherwise.

The event is free and in English. Please register to join us, as spots are limited. The conversation at Framer Framed can be watched live on YouTube: https://youtu.be/vppv_uIDrKY

About the book
CHTO DELAT and Free Home University
WHEN THE ROOTS START MOVING, First Mouvement:
To Navigate Backward: Resonating with Zapatismo 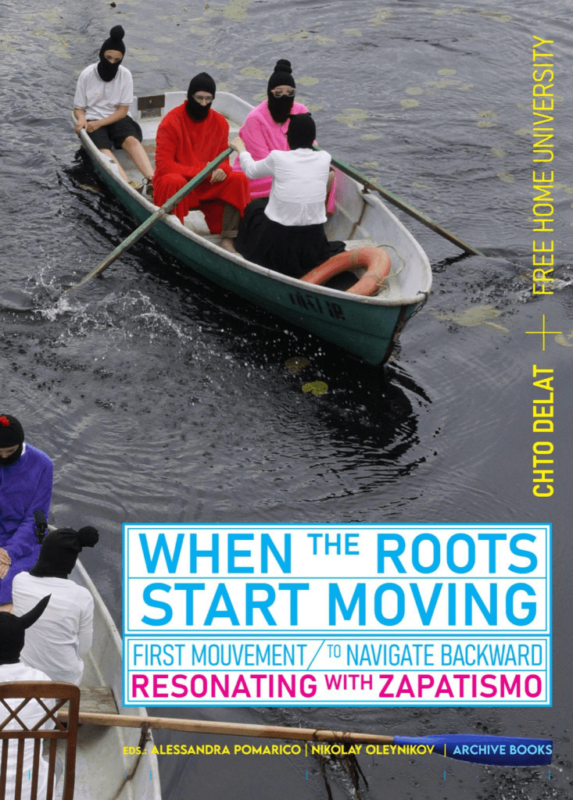 24 October, 15:00-18:00 | Registration via Eventbrite
The event is free and in English. Please register to join us, as spots are limited.

This lecture is based on the film and different versions of the installation #17, The New Dead End  Street. Summer School of Orientation in Zapatism (2017-2021).

The film reflects on how the Zapatistas’ way of life could be practiced and questioned outside of genuine Indigenous experience – how we as Europeans/Russians, with all burdens of our own political and cultural histories, can imagine changing our lives? Realised in the Zapatista tradition of anti-culmination and with an irony well-known from Subcomandante Marcos’ texts, the film investigates questions such as: what could be a theology of emancipation in the Russian situation; what is the role of culture in a process of liberation; and eventually, how can we build a movement of “good people” in a hostile world?

The lecture revolves around the process of working on the film with 17 young people in the countryside. The participants will discuss how going deeper into the realm of Zapatismo ideas resulted in various materials – documentation of performances, puppet theatre, objects and ephemerals.

16:30-18:00 Film Screening  | About the footprints, what we hide in the pockets and other shadows of hope

Co-produced by Framer Framed and State of Concept Athens, the 84-minute film is the outcome of CHTO DELAT’s experimentation with integrating key texts by Zapatista spokesperson Subcomandante Marcos within the educational process of learning the Greek language. Along with a seminar delivered by architect Stavros Stavrides in the Open School for Migrants in Piraeus, in which he described the strong relations between the Zapatista movement and political activism in Greece, this process created a new paradigm of learning — somewhere in between real and imaginary concepts.*

The screening will be followed by a commentary of CHTO DELAT and a participatory conversation with the audience.

This event is hosted by the Court for Intergenerational Climate Crimes (CICC), a project by Indian academic, writer, lawyer and activist Radha D’Souza and Dutch artist Jonas Staal, commissioned and developed by Framer Framed.