Exhibition: A Blueprint for Toads and Snakes

Framer Framed presents a solo exhibition by esteemed artist Sammy Baloji – A Blueprint for Toads and Snakes. The exhibition is curated by Vincent van Velsen and features scenography by Jean Christophe Lanquetin.

The practice of Sammy Baloji deals with the cultural, social, architectural and industrial heritage of his home country the Democratic Republic of Congo (DRC). Based in the photographic medium, Baloji employs a research-based practice in which archival material, museological objects and cultural artefacts inform his work. Through questioning their hierarchical imposition and constitutive nature, the artist critically addresses a past of Western colonialism, the subsequent post-colonial disillusionment, and the continuing imperial aftermath.

The exhibition features several new works by Sammy Baloji. Central to these new pieces is the theatre play Chura na Nyoka (‘The Toad and the Snake’), written by Joseph Kiwele, a Congolese born statesman who later served as minister in the Katanga Region. The play, which holds a metaphorical message of ethnic segregation, was commissioned by the Belgian colonial regime as an ‘educational tool’ for the population. Baloji relates Kiwele’s theatre script to the colonial urban planning of the ‘indigenous city’ of Lubumbashi, which was also structured according to a politics of segregation. Traces of this segregation are still visible today, for example in the shape of the ‘cordon sanitaire’ (sanitary corridor), a buffer zone inscribed in the landscape meant to effectively separate the black and white population. It is also reflected in the street names, which refer to different ethnic populations. In addition, the aftermath of this colonial segregation resonates in Congo’s contemporary society, which is rife with struggles and ethnic tensions, intensified by economic interests. Both are now used as input for the works in Baloji’s solo exhibition. 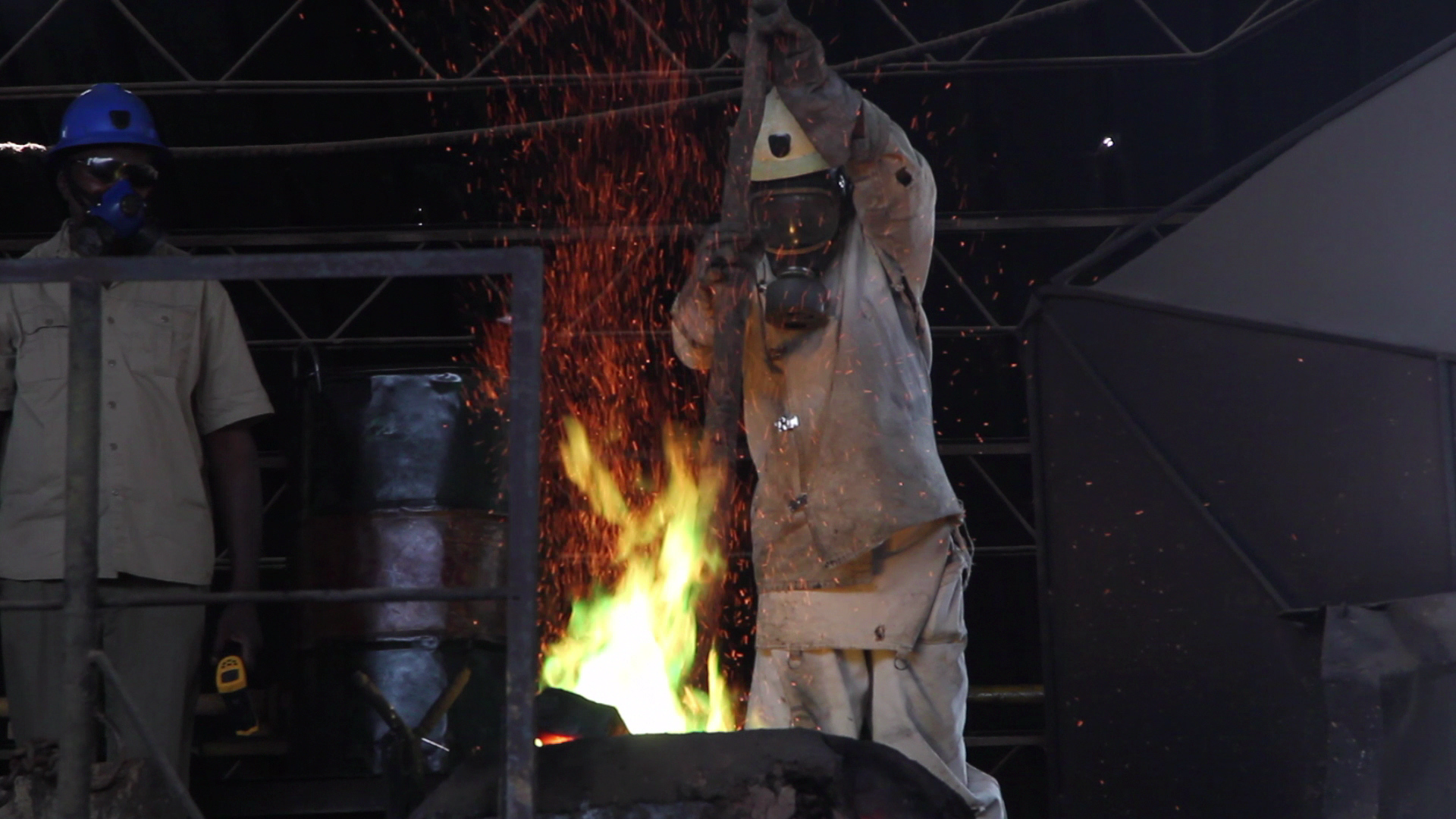 Also presented in the exhibition is Sammy Baloji’s documenta 14 film Tales of the Copper Cross Garden. Episode 1 (2017) in which the processing of copper is visualised as a choreography of black workers’ bodies, as they transform raw material into a product for the global market. This process serves as a metaphor of the colonial endeavour, in which the Congolese population was moulded into a workforce; and shows the ways in which the church played a pivotal role in reshaping Congolese society. The latter is reflected in the film’s soundtrack, containing syncretised ecclesiastical music composed by the same Kiwele, who was assigned to create a piece that fit the catholic codes, but would also suit the Congolese musical taste. It expresses the ubiquitous relationship between the mining industry, cultural manipulation and religion.

In A Blueprint for Toads and Snakes, Sammy Baloji presents a highly original commemoration of the painful history of exploitation and cultural formation in Congo. In this way the exhibition offers a critical reflection on the ways in which mineral extraction, combined with the influence of cultural structures, haved impacted contemporary life in Congo: the foundations of the metaphorical stage on which the present is taking shape.

The opening program is also part of urban festival WeMakethe.City.

This exhibition, initiated by Framer Framed, travels in 2020 on to Lunds Kosthall in Sweden and Aarhus Konsthall in Denmark.

Finissage: A Blueprint for Toads and Snakes

Book launch: When we speak about colonisation

On the occasion of the recent publication by Faassen and Verdijk, and in the context of the running show 'A Blueprint for Toads and Snakes' by Sammy Baloji

Curator tour: A Blueprint for Toads and Snakes

A tour by Vincent van Velsen.

Review: A History Coloured by Belgians