“When the law is unjust, we must put the law on trial.”

A new iteration of the project Court for Intergenerational Climate Crimes (CICC): The Law on Trial opens on the 18th of November 2022 in Seoul, South Korea. The exhibition will be on show until the 1st of January at Oil Tank Culture Park. 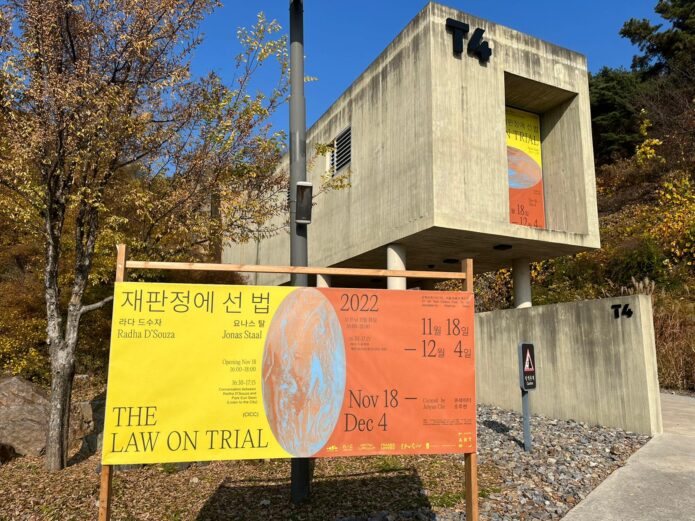 When the law is unjust, we must put the law on trial
This is the central thesis of the exhibition The Law on Trial, which introduces the project Court for Intergenerational Climate Crimes (CICC) initially commissioned by Framer Framed in 2021. This iteration by academic, writer, lawyer and activist Radha D’Souza and artist Jonas Staal at the Oil Tank Culture Park, Seoul is an immersive installation consisting of towers of oil barrels and images of animals that have been made extinct from the colonial period to the present, D’Souza and Staal present a legal framework in the form of The Intergenerational Climate Crimes Act to prosecute climate crimes committed by states and corporations alike.

The CICC is based on D’Souza’s book What’s Wrong With Rights? (2018), with the aim to prosecute climate crimes committed by states and corporations, not only in the past and present, but also in the future. The first edition of the CICC took place between 25 September 2021 and 13 February 2022 at Framer Framed in Amsterdam, with public hearings in which the Dutch State and transnational corporations registered in the Netherlands, such as Unilever, ING and Airbus, were tried for committing climate crimes. Prosecutors and witnesses provided evidence of their wrongdoing. The public acted as jury and were tasked with passing a verdict based on The Intergenerational Climate Crimes Act: the legal foundation of the CICC, which is central to the exhibition The Law on Trial in Seoul.

The first waves of mass extinctions amongst animals and plant life as well as the human communities and cultures that thrived with them, manifested first during the colonial period. Colonialism turned living worlds into property, into commodities, and was backed by the law in doing so. In this light, the climate crisis is a colonial crisis, that has been ongoing for the past 500 years – aided and abetted by dominant legal systems and imaginaries. The images of animals made extinct that are central to the exhibition The Law on Trial, are evidence of that long history of climate criminality that continues to define our present and the possibility of liveable futures, but their presence is also a call to recognise them not as products or commodities, but as non-human ancestors, comrades even, with whom we share a common struggle to defend living worlds for all.

Situating The Law on Trial in the Oil Tank Culture Park, a former oil depot, brings D’Souza and Staal’s work to the site of the crime: fossil capitalism, and the fossil elites that have benefited from it. Building their installation from the remnants of the fossil industry that created the tank, such as defunct oil barrels, proposes to build on the ruins of extractive systems a new proposition: The Intergenerational Climate Crimes Act — a new legal imaginary that centers on intergenerationality, interdependency and regeneration across the human and non-human world; — a vision not of the law, but of justice, in which humans, animals and plants gather as comrades to regenerate the world anew.

Radha D’Souza is a Professor of International Law, Development and Conflict Studies at the University of Westminster (UK). D’Souza works as a writer, critic and commentator. She is a social justice activist and worked with labour movements and democratic rights movements in her home country of India as an organiser and activist lawyer.

Jonas Staal is a Dutch visual artist whose work explores the relationship between art, propaganda and democracy. His work manifests itself internationally in the form of interventions in public space, exhibitions, lectures and publications. Staal completed his PhD research on contemporary propaganda art at Leiden University, the Netherlands. His most recent book is Propaganda Art in the 21st Century (The MIT Press, 2019).

A project by Radha D'Souza and Jonas Staal

Presentation of the verdict in the CICC vs. the Dutch State case

Comrades past, present and future vs. the Dutch State, Unilever, ING and Airbus

Errant Journal: A conversation between Radha D'Souza and Jonas Staal