Report and summary:#PRIVATE
Event on July 21st alongside the exhibition Embodied Spaces
By Minouche Wardenaar

The event #PRIVATE focused on the social and political ramifications of the (un)written laws of digitization, privatization and the encoding of the body. The event was part of Perspectives, a series of public events which ran parallel to the exhibition Embodied Spaces, courtesy of curator Amal Alhaag.

Curator Femke Dekker, artist Silvia Martes, designer Ruben Pater and artist Kareem Lotfy examine, challenge or alter our perspectives of themes on the intersection of technology, privacy and body politics. The public is the fifth conversationalist during this evening. Below a report on the evening of the event on 21st of July 2015 by Minouche Wardenaar.

During her short intro, Femke Dekker talks about the private in our online worlds. For example through Jezebel.com she learns about the private lives of people like the Kardashians to whom it seems as if there is no divide between the private and the public. She gives another example of a photo of a nipple reconstruction that was removed from Instagram. Apparently it’s regarded as offensive to show a woman’s nipple on Instagram, while men are shirtless all the time in different media. According to Femke this illustrates the prudish American way of looking at the body that’s dominating the world today, given that we rely on American companies for our online lives. Through social media we are posting things through which we try to shape our identity. Many people specifically use their body by posting selfies. Dekker wonders about issues on the body, identity and privacy in this context. 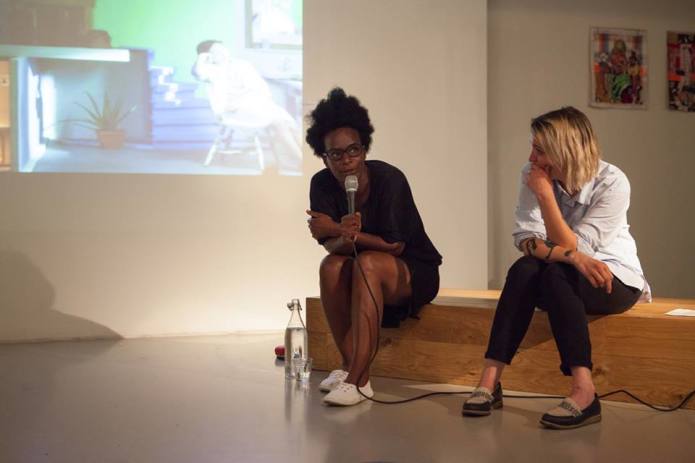 The next speaker, Silvia Martes, introduces herself as a filmmaker, director, writer of short stories and production designer of her own films. By fulfilling all these different roles she tries to be in total control of what lies in the frame. She claims that she makes no distinction between life and art.

In her first year at the Rietveld she learned that there is space in art to discuss race. After this eye-opening moment she started working on a diary project called ‘Am I black enough for you’. During her studies she realized that film was the medium through which she could really express herself. She tends to make experimental short films and plays with the relationship between sound and image. In her films she uses autobiographical elements, such as painful break-ups. While some of these experiences are difficult to publicise, she chooses nonetheless to share them through her art. 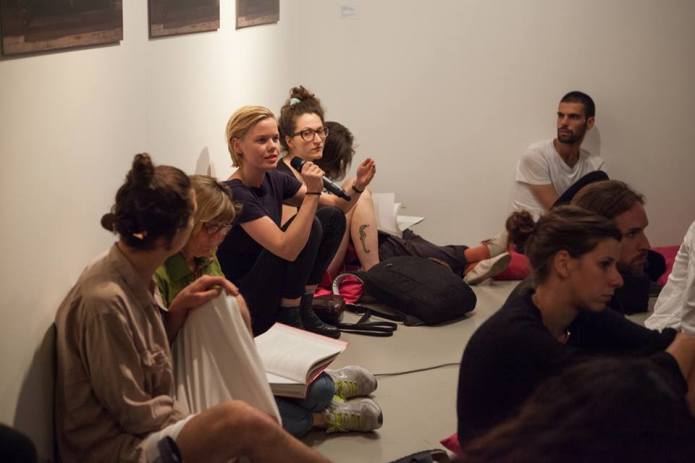 Despite this personal content Silvia’s films feel quite distant because of the sterile décor and the perfect white female bodies of the actresses through which she tells her story. She explains that the choice for white bodies was unconscious; she grew up in a mainly white environment and only recently realized that she has a certain responsibility as a young black woman. 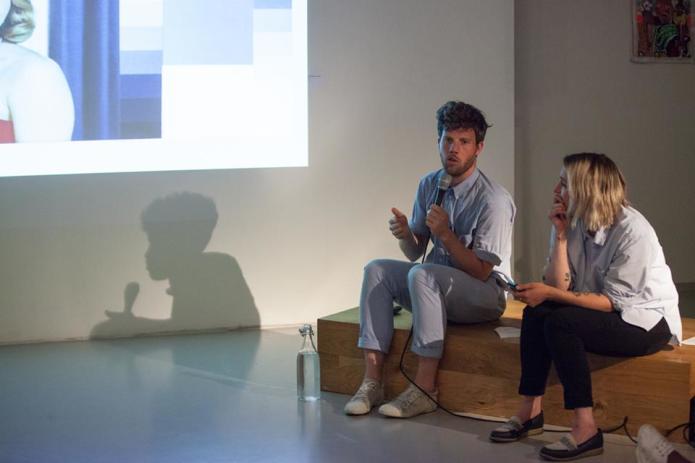 Ruben Pater is the third speaker this evening. This graphic designer has a special interest in geo-political topics, ideology, technology, surveillance and image making. He addresses ways in which technology is used as a tool for oppression. In the past, colonizers made women take off their veils to document their faces through photography. Nowadays there is technology that keeps track of where you are, and even what you buy. This invisible technology has economic value not only for tracking consumerism, but also for security and anti-terrorism purposes. You could say our contemporary power structures are invisible.

Another topic Ruben addresses is the standardisation of the body through technology. He illustrates that such standardisation is biased and related to exclusion. Next he shows that technology that looks at the body is actually outdated. A new technology called ‘smart checking’ uses the data on your smart phone to create a personal profile. In this case the technology replaces the actual body. This leads Ruben to another example. The Americans are using SIM card locations for their drone attacks, so instead of bombing a person, a phone is bombed. Sometimes the SIM card is passed around and random people are under attack. It inspired Ruben to make his Drone Survival Guide, shown in the exhibition Crisis of History #2 at Framer Framed.

To conclude Ruben explores ways in which artists and designers can use these technologies to obfuscate the system. Examples are disguises and technology that enable face recognition, like the collective faces project called Fag Face by Zach Blas and Rubens own project called Behind the Blue Screen.

The last speaker this evening was Kareem Lotfy, who has a residency at the Rijksakademie and speaks about the promotion of mushrooms by the Egyptian government in the 1990’s. To most Egyptians this product was very unfamiliar. The government project failed but in the 2000’s the production of mushrooms suddenly became very successful in Caïro after a company started selling the leftovers from the ministry of agriculture during the outbreak of bird flu. Producing mushrooms was presented as a good alternative to keeping chicken and eating meat. In 2008 producing mushrooms was one of the most profitable small businesses in Egypt. People grew them in the empty corners of their homes; they no longer needed land to farm. The only thing you needed was to have someone in your personal network who could sell you the supplies.

Lotfy notices a failure of the nation-state and foresees that we will have to rely more and more on the private in the future. Our societies are based on land and administration, if you would take that away, people would not have anything in common, according to Lotfy. Since these mushrooms can grow on garbage, people could live of their own biological waste. It’s an example of a community that’s becoming self-sufficient. Lotfy’s talk inspires us to think about self-sufficiency and power structures and how this is related to agriculture and food in general.

As a last remark Femke states: “Whether we are designers, artists or curators, through our stories we tried to unveil hidden aspects and hidden layers and we just try to show people that there are different realities and different gazes. There are so many knowledge pools that hegemonic culture does not know about; we should continue telling our stories in the public domain and hopefully there will be someone out there listening.”