The exhibition Embodied Spaces (2015) was supplemented by a public program with film screenings, music, artist talks, and guided tours. This allowed for a deep reflection on the subject of the exhibition. The event Filthy Mouth – Dirty Politics was an experimental conference dealing which the relationship between filthy, vulgar language, radical feminism and digital (non) spaces. Filthy Mouth – Dirty Politics consisted of workshops, performances and a panel discussion by artists Hannah Black (UK), Deniz Unal (Turkey) and Evan Ifekoya (UK) who’s work is part of the Embodied Spaces exhibition. Below a report on the event by Marieke Bigg:

New formats are needed in order to explore and counter dominant relationships between what is deemed filthy, or vulgar, language and radical feminism. The policing of language becomes ever-more obvious in today’s digital (non-) spaces. Yet these platforms also provide spaces that potentially counter the dominant, often academic discourse on queer politics and gender, providing opportunities for groups to take ownership of the language used to identify them. The experimental conference Filthy Mouth-Dirty Politics tried to dissect, re-examine and re-present the language and the spaces in which it is used to discuss gender politics.

The conference was preceded by a special edition of the DJ Workshop for women feat the DJ Collective SUPER/NO GOOD. This was followed by a series of performances and a panel discussion by artists Deniz Unal (Turkey) and Embodied Spaces artist Evan Ifekoya (UK). Finally, young artist Emilio Martinez presented a performance in which the personal intersects with fiction, queer and migration politics. The discussion was lead by Maria Guggenbichler, who is also an editor to the event’s media partner, Girls Like Us.

The agenda for the evening’s discussions was summarised rather aptly by Guggenbichler. She asked, referring to French author and feminist critic Monique Wittig, to what extent the subject in psychoanalysis can be analysed beyond the conditions of his/her oppression. She then extended this question to the public domain more generally: to what extent is the contract of language, dominated by heterosexual discourses, broken by homosexuality or the subversion of gender norms? When is language deemed filthy? Where is this language spoken and who does it address? 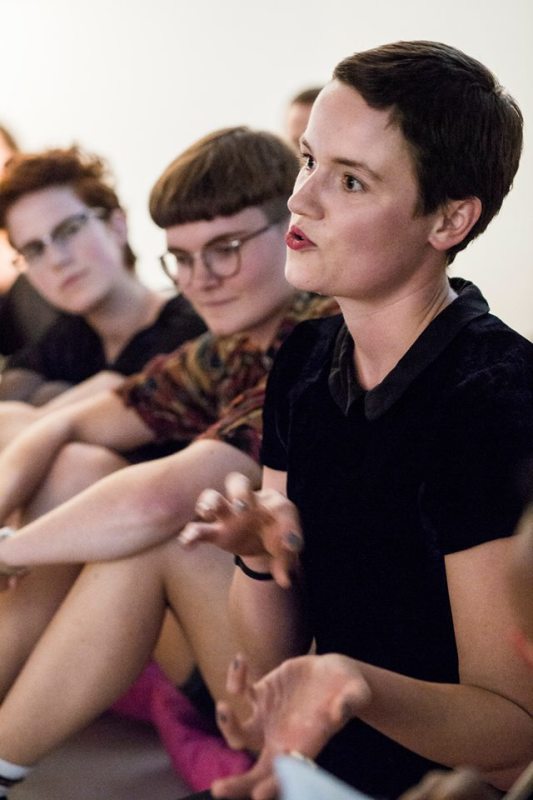 These questions were explored throughout the first part of the conference. Evan Ifekoya began with a performance of the ‘Gender Song’, followed by an intervention that aimed to challenge the role played by the artist as a performing body. Ifekoya asked the audience to edit the lyrics of their song to reflect their own experiences. In this way Evan invited the audience to participate in the telling and rewriting of the account of gender identity explored in the song. 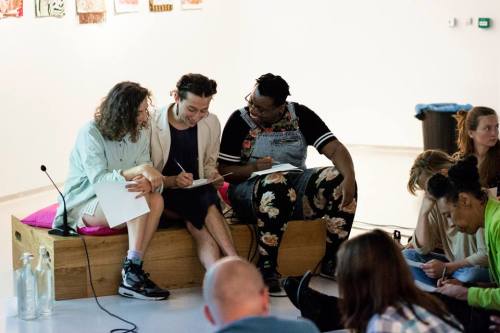 Audience members had especially diverse renditions of the line “…do exactly as your husband wishes”. Some changed ‘husband’ to ‘parents’, others to ‘mother’. These changes reflected the different demands and stereotypes that policed or controlled individuals in different ways. 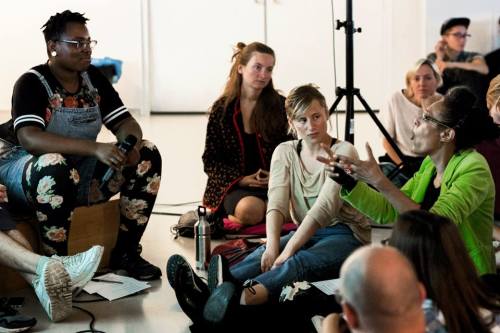 The term “he-male” in the song was also a particular hit. The subversion it suggested of heteronormative gender paradigms through its ironic word-play fell right in line with the strategy a lot of the audience felt was an effective way of dealing with experiences of discrimination or oppression they’d had. The use of humour as a tool for resistance by the dissident subject in this way became another topic of conversation. Is humour, we asked, an act of defiance whereby we can disarm oppressive forces by taking ownership of the insults they hurl at us, or does this lead to the perpetuation of the stereotypes we try to negate? Should only oppressed minorities have licence to this irony or should dominant groups be able to partake in mocking stereotypes and racism?

Emilio Martinez then presented his video essay, a project that arguably draws on irony to stake its claims, and that had been developed as a response to the invitation to attend the conference. The 17-minute long video essay included cultural artefacts, videos, recordings of conferences and a face-time conversation with the artist’s own father that revealed his coming to terms with his Martinez’s queer politics. The video triggered deeply striking conversations about the role of the academy and academic language in speaking about and coming to terms with gender and identity. This language often overlooks the personal, visceral journeys of individuals and at the same time provides one of the only registers available to explain or discuss gender and politics with dominant groups. Martinez also stressed that this academic language is moreover usually English, and even on supposedly inclusive digital platforms, excludes large parts of the world. The question of who this language truly serves and of whether radical artists ought to reject or change the practices from within the academy were all topics of discussion at the event. 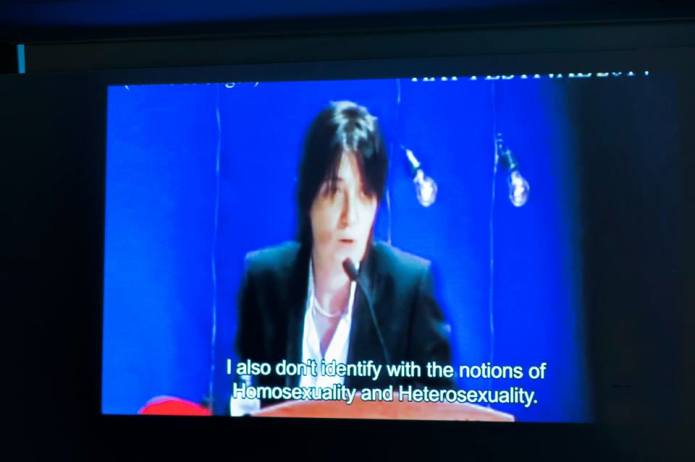 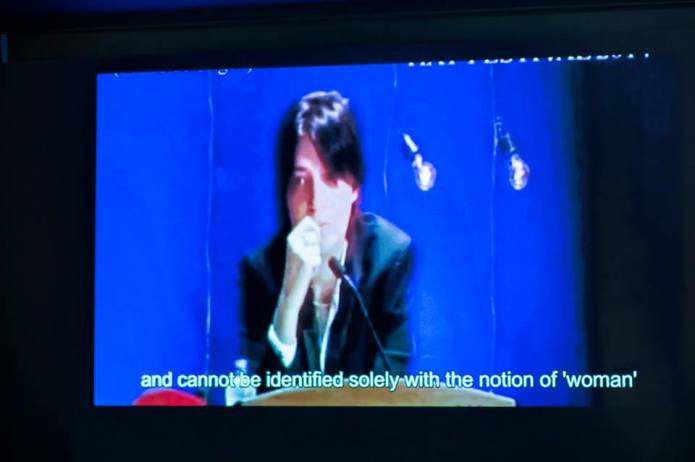 The digital became even more central in the final live performance at the conference. Deniz Unal performed a poem that drew on the language of Instagram hashtags. The language of fitness and health on these platforms present an affront to the body and exercise an authority over bodily identities. This triggered discussions about the pathologizing of bodies and minds that do not conform to the social norm, and of how embracing or echoing this pathology can be a mode of resistance. Again, there seemed an overall positive sentiment amongst the audience that believed that language and the Internet had the potential to challenge, rather than merely affirm, exclusionary perceptions on gender and the body. 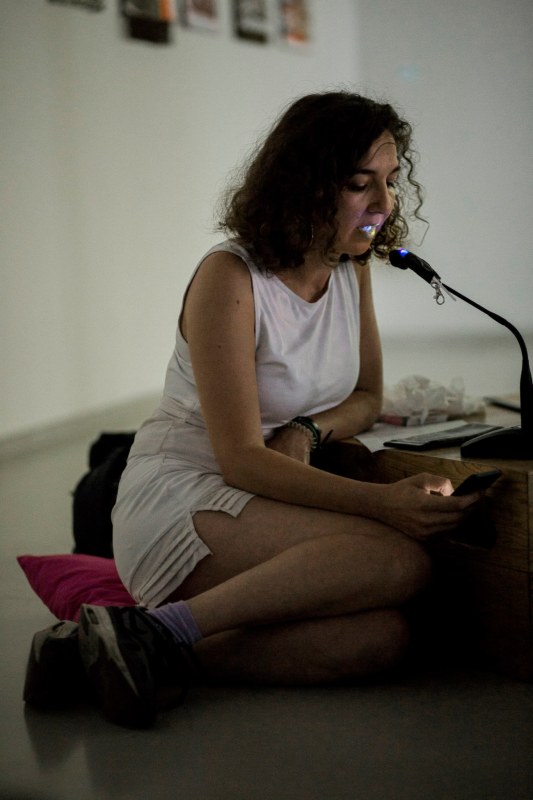 The conference ended with a screening of Hannah Black’s work. The interactive and comfortable space staged at the conference invited an impressive range of voices to partake in the conversations triggered by the artists’ work.

Read more on the Feminist in Art.