Report: 'Being Imposed Upon' Book Presentation

Recursively defined as a “timeless love letter and manual by and for black women”, the publication Being Imposed Upon (2020) celebrates a diverse compilation of literary works across the genres of poetry, non-fiction, and academic/activistic literature. Various contributors explore what it means to be black and female in Belgium today, encouraging an ongoing, critical dialogue dedicated to (de)colonial practices within the realm of arts & culture.

Hosted by Evie Evans of Framer Framed, Gia Abrassart (editor and freelance journalist/activist), Anne Wetsi Mpoma (writer/art historian/curator) and Bambi Ceuppens (curator/moderator) sat down together for a powerful and intimate conversation that took place as a Zoom livestream webinar on the 8th of April 2021. Together, the speakers explored the intersections between (de)coloniality, feminism and the politics of art and space, prompting critical reflection on the ideological practices exercised by Framer Framed and other institutions alike.

Following an introduction of herself, Wetsi spoke of her aim in exploring how resistance can be organised in the current (post)colonial landscape situated in Belgium today. Her personal interests primarily lie in the role and accountability of institutions (museums, art schools, universities, art galleries) in the racialised public of Belgium. Central to her discussion is the contested notion of ‘universalism’: How are Black people viewed when we speak of the general public? How is African culture perceived in society today? In what ways are black people rendered invisible in the sanctioned narratives of Belgian history and heritage? These are but a few of the questions that emerged in Wetsi’s essay “Resisting in the Arts and Culture in a Postcolonial Context” (2020) in Being Imposed Upon. 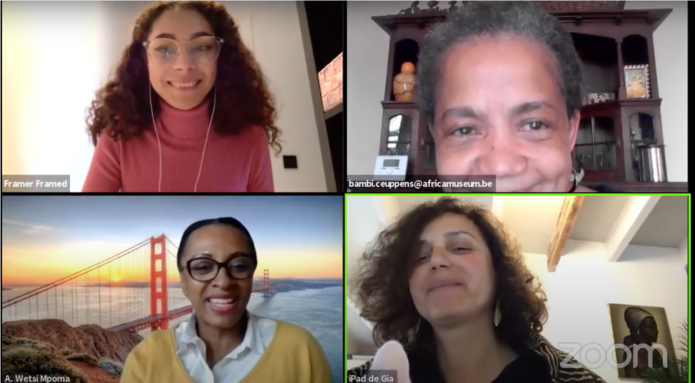 Next in the conversation was Gia Abrassart, an editor, freelance journalist and activist for the African diasporic community in Belgium. She founded Café Congo in Brussels in 2018, a cultural space intended to provide refuge and solidarity for artists of diverse backgrounds, particularly Afro-descendants. Despite the name, Abrassart reveals how the space serves as more than just a café, describing it as a site where “[decolonial] resistance and artistic creation are honoured [and recognised].”

According to Contemporary& Magazine, the café features a library and hosts poetry evenings, film screenings and recreational gatherings (1) in order to highlight the colonial history of Belgium, a discourse which is often eclipsed or repeatedly excluded in Belgian media. Through independent, discursive spaces like Café Congo, Abrassart and Wetsi hope to inspire a sense of urgency in dismantling the asymmetrical power relations embedded in much of the social, economic and political structures today. Ultimately, their vision is for artists to reclaim power and autonomy from a system governed predominantly by white men that decide on the value of African art. “[At Café Congo], we no longer have to negotiate who we are or what we are supposed to be” – an idea which closely resonates with the very meaning of the title Being Imposed Upon. 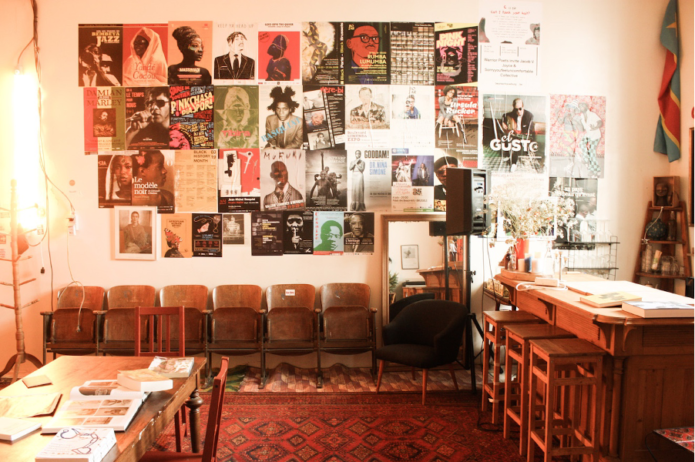 The Library at Café Congo in Brussels. Source: Serine Mekoun (2020)

On Being Black in Belgium

In a conversation on the experiences faced by the African diasporic community in Belgium, Wetsi remarks on the racist attitudes of many Belgians towards black people who were born or raised there. Moreover, she highlights the issue of Afro-descendants identifying as Belgian solely due to the colour of their skin, stating that it tends to make white Belgians uncomfortable.

Wetsi further comments on how their depiction as the exotic ‘Other’ – most notably in classical, tribal art or ethnographic museums – reproduces age-old stereotypes about ‘blackness’ and ‘African-ness’ that does violence to the credibility of contemporary black artists. Despite being asked to be creative, their works are frequently met with criticisms of not being ‘exotic enough’ in order to be merited, leading to exploitation and discrimination in the art world. 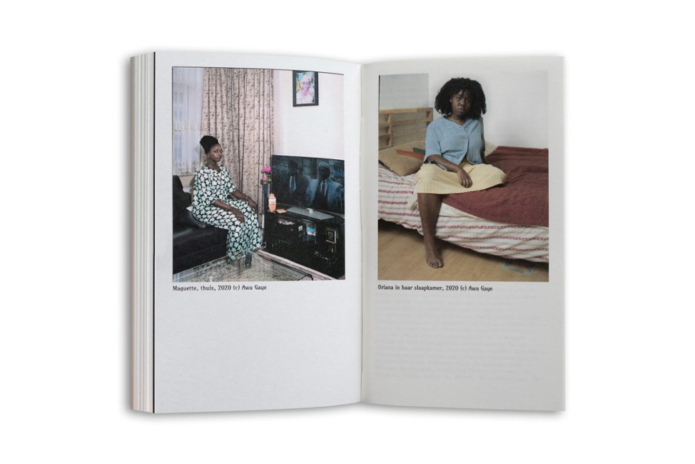 A look inside Being Imposed Upon. Courtesy of publiekeacties.

Decolonising the Art Scene in Belgium

While the COVID-19 pandemic has instilled various challenges, Abrassart believes it has brought positive changes for the art scene in Belgium. With many restrictions in place, institutions have shifted their focus inside the country’s borders, granting increased accessibility and recognition for local, black artists within the public sphere. According to Abrassart, this is the first step in decolonising the public space.

For Wetsi, a black-owned institution is synonymous with ‘freedom’: Like Café Congo, it is autonomous and financially independent; a safe space in which black communities can gather together without judgement, where identity does not require performance or negotiation of any kind. Wetsi envisions black-owned institutions as spaces to connect, heal from the collective traumas of a shared colonial past, and build allies with other (black female) activists on the continent (also known as ‘political sisterhood’). Ultimately, it is about answering the need of belonging through solidarity in a world that is still heavily laden with discrimination.

Watch the full conversation on the Framer Framed YouTube Channel.

Read more about the project and speakers

For those interested; the book can be ordered at Onomatopee: Purchase the publication

Book Presentation: Being Imposed Upon