The art collective We Sell Reality makes products, installations, and performative interventions in public spaces. Through their practice, the artists focus on making the daily lives of undocumented migrants visible and reflect on the paradox of closed borders for some and open borders for others. By shedding light on the reality of their lives, the collective reflects on the situation of dependency and struggle for survival for refugees in Europe.

Introduction
Since the beginning of 2021, Framer Framed opened it’s space to We Sell Reality. Creating this welcoming space within the city of Amsterdam is of great value to the members of the collective. Many of them are undocumented migrants, and as national and local institutions create policies that operate to exclude them from society, they often feel like they do not belong in The Netherlands. This became especially apparent during the lockdown due to the COVID-19 pandemic. Day shelters were closed, leaving undocumented migrants to their own fate while they were not protected against the virus. In these difficult and rather lonely times, Framer Framed offers a comfortable environment where the artists can come together. Their art practices function as a creative strategy of political resistance against their contested position within society whilst also constructing a sense of feeling welcome and at home in the city. 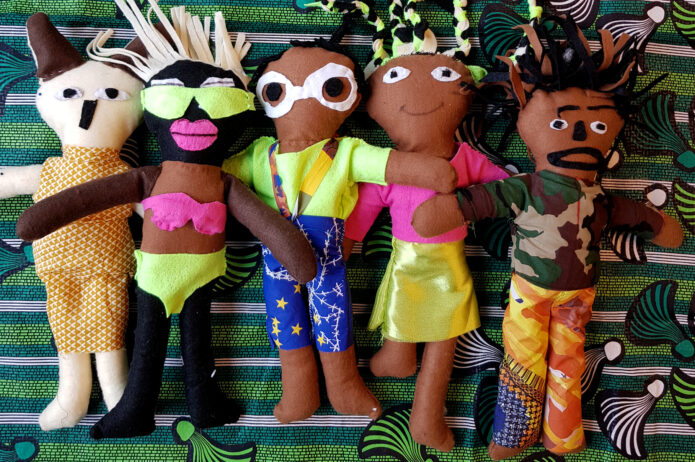 The background of We Sell Reality
We Sell Reality originated as a branch from the Amsterdam based political movement ‘We Are Here’ in which (undocumented) migrants collectively fought for the rights of refugees. When this movement was shut down by the municipality of Amsterdam in 2019, the refugees were looking for alternative ways to collectively fight for their rights. A group of mainly Sudanese undocumented migrants based in Amsterdam and two of their supporters started to make art together. They made banners and T-shirts to raise awareness within Dutch society about the unbearable living conditions in Sudan as a consequence of political conflicts and war. After the success and collective joy of making these art pieces, the group started brainstorming about other ideas to create art as a creative political strategy of resistance. Through the intimate collaboration of enthusiastic and passionate undocumented migrants united by their desire  to fight against their position within Dutch society, We Sell Reality was created.

Since 2020, people from different countries in Africa such as Gambia, Sudan, Eritrea and Ethiopia have joined the collective. The artists are living in Amsterdam and in asylum seekers’ centres throughout the Netherlands. Many of them have been waiting for a long time for their existence here to be recognised, some as long as three years. Due to the precarious situation the members are in, they come and go. We Sell Reality can therefore be described as an open-source platform. Currently, the collective consists of 15 social designers, most of whom are refugees in limbo. They gather weekly to brainstorm and create art which represents undocumented migrants within an exclusive society. Nowadays, We Sell Reality comes together in Framer Framed, where they are provided with a large working space and opportunities to make art with a growing group.

Children’s book ‘De Deal’ by We Sell Reality,  available for sale during Powerplay – Deals All Over (2021)

Being undocumented
Over the last decades, Western society has reported a ‘refugee crisis’ consisting the forced migration of refugees towards Europe in hope of seeking a safe place to continue their lives. The European Union is limiting the flow of migration into European countries by increasing border surveillance in order to exclude these ‘undesirable foreigners’. Responses from nation-states towards forced migrants presents how few visas are offered, they are being arrested, sent to detention centres and eventually deported. Many asylum applications from refugees migrating to Europe are rejected. Often, the documents they submit are not considered sufficient evidence to grant them a refugee status. This process is quite arbitrary. Certain documents are sufficient for one person, but not for another. When their application is rejected, the refugees are not forced to leave, but are required to leave voluntarily within 48 hours of the rejection. However, many fail to leave the country within 48 hours. On the one side, they cannot go to another European country because of the Dublin claim. On the other side, they also can not return to their own country because it’s simply too dangerous. It must be recognised that these undocumented migrants cannot go anywhere. They cannot stay here, but they cannot go anywhere else either.

Throughout western society, there are many stigmatisations attached to being undocumented. Through geopolitics, media, and public discourses undocumented migrants are often represented as ‘illegals’. Scholars and humanitarian organisations stress that a person cannot be illegal, and this label denies their humanity. This stigmatisation represents just one of the many examples of exclusionary practices against undocumented migrants which are communicated through dominant discourses. The labels are used to justify their exclusion from citizenship rights and thereby determine their right of movement. Simultaneously, their everyday life circumstances are underexposed. Undocumented migrants are living precariously by constantly being on the move and endlessly waiting during their asylum procedure.

The creation of critical counter knowledge
We Sell Reality stresses that undocumented migrants are often represented in a negative light without considering their vulnerability and struggles in everyday life. The collective recognises the importance of representing themselves in the host society and creates the opportunity to share their own narrative. In the process of becoming aware of their position as a marginalised and a rather invisible group in society, they resist against it. They put effort into emphasising their marginalised position as a form of critical counter knowledge. In deep contrast to the negative representation of undocumented migrants through dominant discourse of the host country, We Sell Reality provides powerful counter insights on undocumented migrants from their own perspective.

Through their art practices, the collective raises awareness on the situation of asylum seekers in The Netherlands and Europe in general. They make tangible what it means to be subjected to these corrupted policies, and that is a hard reality to sell. But We Sell Reality’s colourful pallet and enormous sense of humour is extremely attractive in its resilience. It makes you want to side with the group immediately, and this is exactly what they aim for. We Sell Reality’s installations and performances are unapologetic and monumental. They make sure you can’t miss them. Despite their contested position within society, We Sell Reality can, and unavoidably must be, characterised by their strength, empowerment, humanity, and above all, their extreme talent for the arts. Even though they are lawfully not recognised in their existence here, they are here, leaving their footprint in the arts. Here, the power of making art is very real. 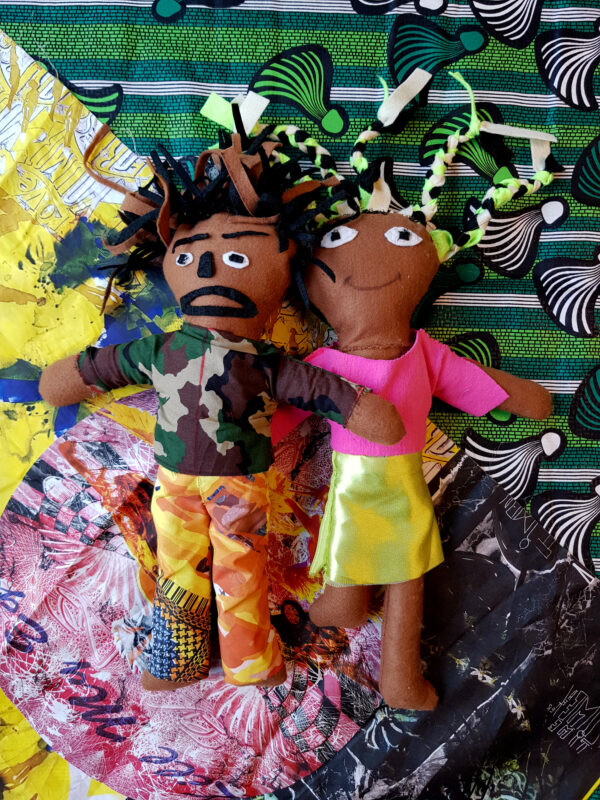 The importance of representation and belonging
Through their projects, We Sell Reality produces alternative knowledge and an alternative way of looking at the world. Their art practices can be understood as a creative and alternative strategy of political resistance towards the migration policies. They represent a great example of how art practices provide possibilities for marginalised groups in society to politically express themselves. By focusing on their personal qualities through creative expressions, the human aspects of the stigmatised migrants are countered. These practices make them human, valuable, worthy, and labelled as an artist rather than emphasising their citizenship status in relation to the state. This transformation of looking and labelling migrants has a great impact on the construction of their identity and sense of belonging within an exclusionary society.

We Sell Reality x Framer Framed
Especially during the time of the Corona pandemic, in which the exclusion of marginalised groups becomes clearer and sharper, Framer Framed gives We Sell Reality a warm welcome. Although exclusionary discourses on forced and undocumented migration in the Netherlands make undocumented migrants feel unwelcomed, Framer Framed is convinced that supporting art practices by local city-based institutions can contribute the construction of belonging among marginalised and contested groups in society. The institution thereby acknowledges how everyday life and artistic practices can contribute to constructing a sense of place and political belongingness in the city. Through making art and socialising within the collective, the members feel like they belong to each other. Emotional, and informal notions of citizenship and belonging can unfold on a local level. Their resistance and awareness of their situation, by fighting for their rights as human beings through their practices, contribute to constructing a sense of political belonging within an exclusionary society. The collaboration between Framer Framed and We Sell Reality therefore presents a great example of how local institutions can support the empowerment of marginalised groups.

The current exhibition Powerplay – Deals All Over
In their current exhibition Powerplay –  Deals All Over (2021), the collective has visualised deals the EU makes to keep refugees out in the form of toys for children. Powerplay is a colourful installation about the systematic exclusion of refugees from Europe, in the form of a toy shop for children. When you enter the space, you imagine yourself in a children’s paradise. But as you look beyond this bold exterior and delve into its underlying stories, you will see a different side. Behind the political curtain, deals are being brokered to ensure that fewer refugees arrive in Europe. This installation raises questions about who the winners are and what there is to win. The loss is clear. People who are being forced to flee their homes because of war and violence are once again side-lined.

We Sell Reality has been preparing for this show for more than a year at Framer Framed. The installation is multi-layered and covers a lot of different EU deals and includes a variety of toys. They present books for children about the deal with Mali and the deal with Sudan, small igloo tents with prints of refugee camp Moira, a series of dolls called ‘We Are No Puppets’ and wooden cars, boats and planes on the push back deals at the Mediterranean Sea. Every Friday, Saturday and Sunday members of the collective will be present within the toyshop to lead the visitors into a world that is not as far away as people imagine.  On the contrary, this is the world you are talking to.

We Are still Here.

The exhibition Power Play – Deals All Over is on show at Framer Framed between October 9 and November 19, 2021.

Exhibition: Powerplay – Deals All Over

A colourful installation by collective We Sell Reality

How can we, as a cultural organisation, contribute to society during an unprecedented crisis?