On the 26th of May, the symposium Teacher as conceptual artist took place at Framer Framed. Teacher as conceptual artist is the title of not only this symposium but also of an exhibition that took place from 2 – 3 June at Framer Framed. Both the symposium and exhibition were centred on the practice of Mexican-American artist Jorge Lucero and his artist-in-residence at the at the Arts Education research group at the Amsterdam University of the Arts (Amsterdamse Hogeschool voor de Kunsten, AHK) from February till May 2018. This is a report on the symposium, written by Framer Framed intern Jessy Carey.

The symposium began with a keynote by Jorge Lucero in which he elaborated on the meaning behind the concept of his artist-in-residence. Researcher/teacher Marike Hoekstra, artist Frank Koolen and Emiel Heijnen and Melissa Bremmer (both Arts Education research group at the Amsterdam University of the Arts) also contributed to the program, this report focuses on Lucero’s contribution.

As an introduction to the concept of Teacher as conceptual artist, Lucero makes an important point that sets the tone of the concept and the event itself, which is ‘that this is not a formula’, but rather an individual experience of a thought and more of an explanation of his journey with the concept, from which you can take what you want or need and apply it to your life, if applicable. Teacher as conceptual artist is therefore ‘not concrete’, in that regard, the greatest obstacle that exists within the concept is trying to solidify the concept as it is more a way of thinking than a tangible object. This challenge of attempting to materialise a tangible object out of an almost intangible profession was a very confronting endeavour, as Lucero mentions the realisation that ‘teaching in and of itself is an invisible activity’, creates tension when trying to execute it because the attempt to manifest something physically that is naturally immaterial, could diminish its value. Therefore he poses the question that bases this discussion and attempts to answer how to overcome this tension: What is ‘teacher as a conceptual artist’?

Teacher as conceptual artist is basically the act of looking at the method of teaching and the educators behind the act through the conceptual art practice, and more specifically looking at what permissions conceptual art can open up for the teaching practice. In this case, potential permissions are related to how educators can use the concept to manifest a physical artistic form to the invisible act of teaching. This is done through utilising the school (which acts as the studio), the daily school activities (which are used for inspiration) and the pupils (who are considered co-artists to the teacher).

According to Lucero, when looking at teaching through a ‘conceptual art lens’, there are six things that have been opened for the practice of teaching:
1. We think of institutions as material.
2. We gather energy via accumulation.
3. We can use closeness.
4. We rely and value co-construction.
5. We understand invisibility as a powerful way of being in a world that always wants to see what you are doing.
6. We write and deploy our own narratives.

The meaning of these six things helps the audience understand how this idea came about and how the physicality of Teacher as conceptual artist was executed. The first point, which involves the materialisation of an institution, means that often an institution can be exemplified within an artist’s work, which means an institutionalised object can be used as an example, or incorporated into the work. Institutions define us and we exist in them throughout our lives, we can therefore never truly exit them, especially as a teacher who is employed to uphold the institutionalised standard, this means the most viable option is to embrace the institution as part of the process, as part of the artwork. As an example Lucero shows documentation of a performance piece by Andrea Fraser utilising the Guggenheim Bilbao building, called Little Frank and his Carp. In the piece Fraser took the audio tour of the museum, in which the Frank Gehry architecture is being spoken about. According to Fraser the voice of the audio guide sounded as if it was having sex with the building, from which Fraser caressed and made out with the building, as if taking directions from the audio. This example illustrates how you can use an institutionalised object to create art. 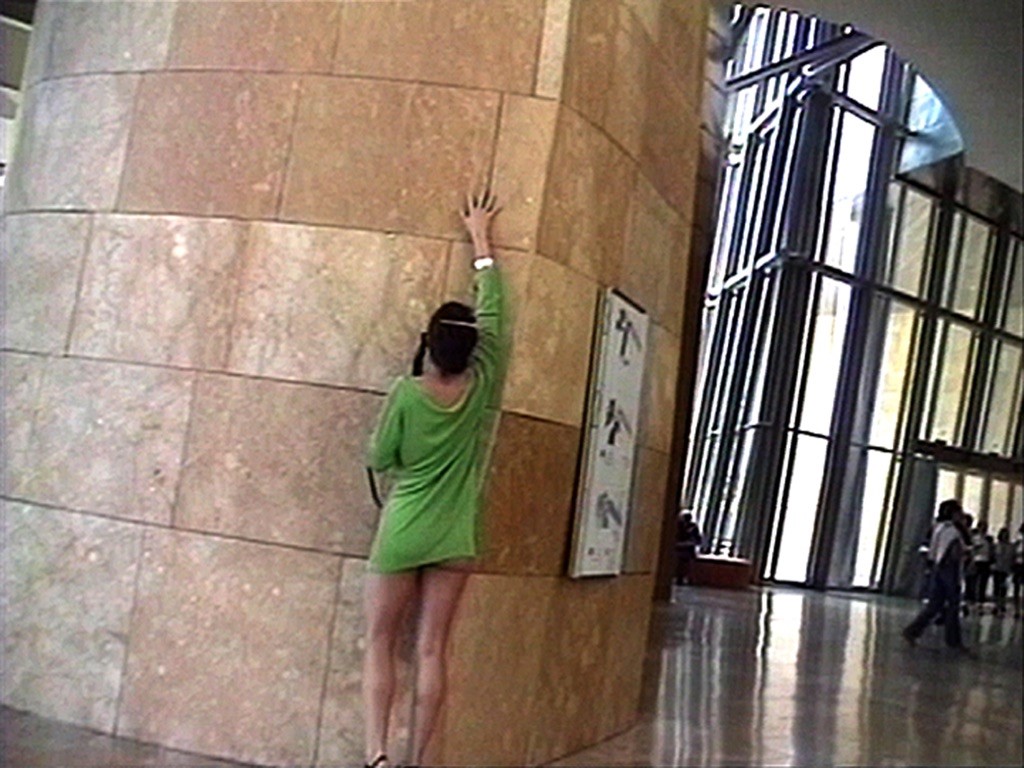 Above: An outtake of the video of Andrea Fraser’s performance piece Little Frank and his carp, 2001.

The second point Lucero mentions, is about gathering energy via accumulation. This meaning that, as a teacher or an institutionalised individual, within a busy metropolitan lifestyle, what happens when you do not have time to create work? Well, you create little works or increments and after a lengthened period of time, you have an accumulated amount of works that you can add together to create a ‘constellation’ of pieces that act as a puzzle, from which you can create a single coherent piece.

Thirdly Lucero elaborates on how closeness can be used, this idea utilises bodies being close to each other. This is important because to Lucero ‘touch creates emancipation in the classroom’ which in other words means that touch creates freedom from social, political or legal restrictions, this helps conceptual art flourish, as it is by definition meant to be free from boundaries and labels. An example given by Lucero, illustrating an artwork built from the idea of closeness is Yoko Ono’s Bed-In in which she and John Lennon turned their bed, which is something highly intimate, into an artwork. This then invites the audience into their intimacy, which initiates closeness and a freedom from social constrictions that exist within the privacy of the bedroom, especially regarding the privacy of those who are considerably well known.

The fourth thing, which is co-construction, utilises that closeness mentioned prior. Co-construction has to do with the need for collaboration. For example the work called How to get started by John Cage, relies on co-construction. In the artwork, Cage set up instructions, for participants to follow in order to help create an artwork. This was important because it allowed the artist, to have the opportunity to watch the creation emerge and be an observer to his own work. This happens within teaching, as a teacher gives the student directions, from which the student builds and creates something that the teacher then watches emerge, this then can be used as a opportunity for the teacher, to create art.

The fifth concept of invisibility has always been a prominent concept within Framer Framed, as often the narratives within exhibitions involve helping the unseen be seen. For Lucero this point was of high significance, this is because the act of teaching and the work of the teacher in itself is often nowhere. Which is why the gesture of documentation and turning that documentation into art, becomes of such high value. As an example, Hayley Newman created a work called Connotations – performance images where, rather than actually creating a work and breathing 8 hours worth of breath into plastic bags, she instead staged the documentation of the work being done which sufficed as the artwork. She did this in order to explore the role of documentation in performance art. This act gave permission to artists to make use of documentation when creating an art piece, that the documentation in itself could be the artwork. Therefore, even if the act of teaching is invisible, this point shines light on the fact that you are able to document what you did and display that documentation as conceptual art.

In relation to invisibility, the sixth point, involves the importance of telling the story. Telling one’s own narrative is an essential part of the creation process. There is a myth within art that the artwork should speak for itself, however sometimes, an artwork needs context, and it needs an explanation in order to make the artwork complete. This relates to the teaching process, because without an explanation of a teachers involvement within the process, their involvement would be unknown, as the students themselves and their work are the dominating result. In the symposium, Lucero mentioned that: ‘you do, you document, you write and then you have a moment where you have to tell the story and you have to go back and decide out of these 150 images, these three tell the story and then you create the paragraph that goes with them which tells the story of the iterative process’. Without the explanation of these three images the context would be lost. For Teacher as a conceptual artist, the context/ publication is almost as important as the pieces you display, mostly because of the aspect of invisibility; the viewer would not understand the contribution of the teacher within the artwork, without context.

Additionally, the importance of conviviality, which means to live alongside each other, is paramount to Lucero, as it is the only way to actualise these six points. When living alongside each other and seeing and thinking about the world with a certain amount of pliability which means looking at ‘a way to bend the world’, we have to take from each other’s worlds, therefore creating a new collective world that consists of all those involved. This is what Teacher as conceptual artist does. It needs multiplicity in order to thrive; the people that the teacher interacts with become an important part of the manifestation of documentation of that invisibility that exist within teaching. This is because everyone that is involved with the creation of the concept ‘encapsulated the spirit’ of it, therefore it would be non-existent without the people that participated, no matter how small their involvement was. 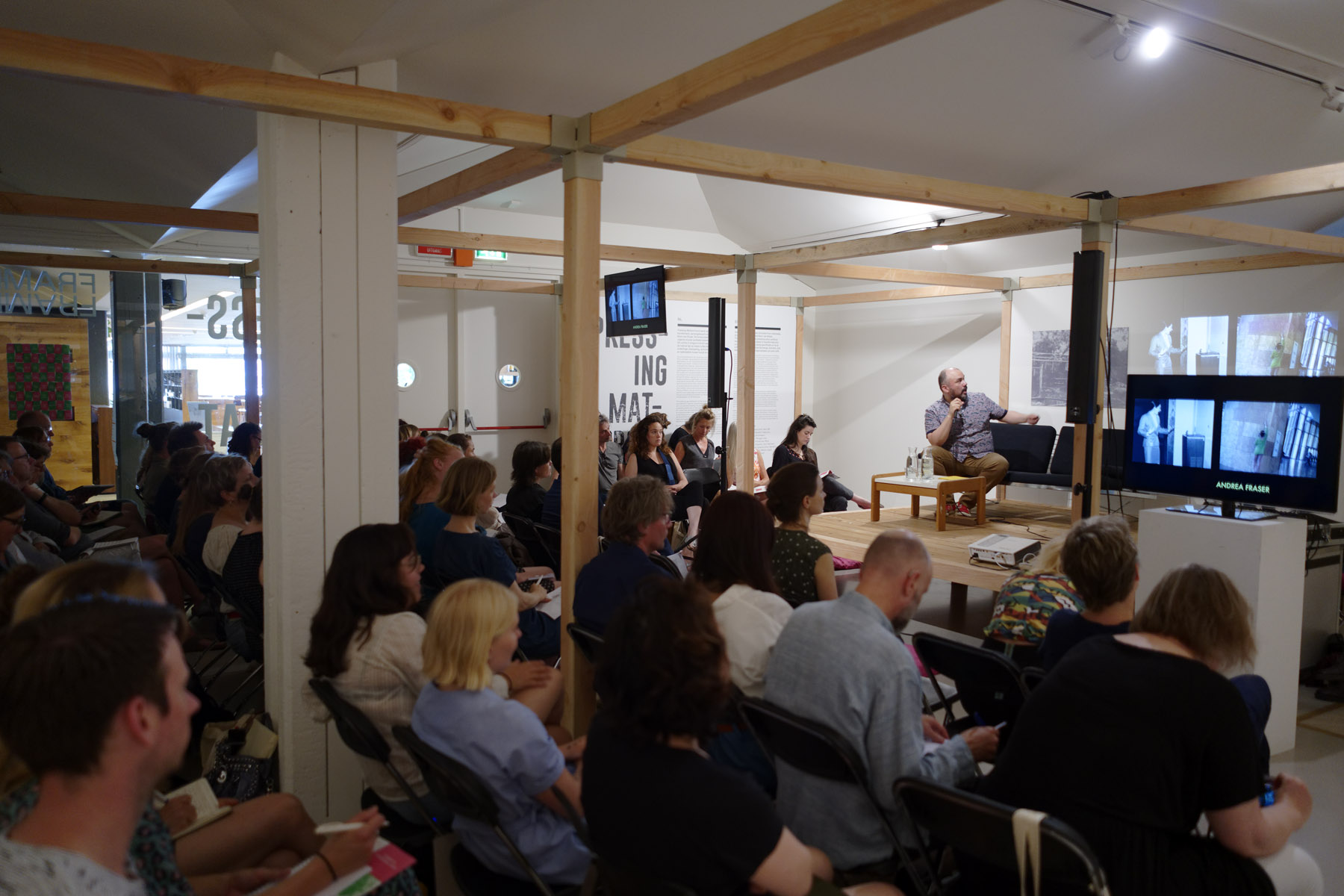 The symposium Teacher as conceptual artist successfully opened a dialogue about how one can utilise everyday life when creating art, which is done by looking at everyday activities through a conceptual art lens. The concept therefore attempts to broaden the allowances that exist within conceptual art and the art world in general. It is a way of thinking, which aims to assist individuals in using every surrounding moment as inspiration and opportunity to create art. During Lucero’s lecture, the six points he identified, illustrated how one can proactively make teaching and artistic practice coincide. This can however also be translated into other facets of life, and is not limited to the teaching profession. Within this concept the institution plays an important role as it becomes a part of the artwork instead of the constraining component that needs to be fought against.

The symposium left me viewing the way in which we can create art in a new light. I felt less limited as a creator, as I began to view the moments where we think we do not have time to create as an opportunity to reconstruct what I considered valuable moments for example the value and inspiration that exists at work or at school. Lucero shone light on the ability to use these so called ‘burdens’ to the advantage, and benefit creative process.

Organised by the Amsterdamse Hogeschool voor de Kunsten (Amsterdam University of the Arts) on 26 May and 2 & 3 June.