For this third Skype conversation titled Live Conversation HOME #3: Constructing home in the context of the exhibition HOME (2017) curated by Meta Knol, Framer Framed received four speakers on the 28th of August to talk and reflect on their personal experiences of and thinking on ‘making home’ – practically and symbolically – in a context of war, diaspora and displacement. A Skype connection was established with Gaza Sky Geeks, a start-up hub in Gaza, and the Framer Framed exhibition space in Amsterdam North.

When thinking about ‘home’, the first thing that comes to my mind might be quite reductive: A functional space where one lives and, more importantly, a place that makes us feels safe and with which we developed a special connection. While it is commonly agreed that ‘home’ as a concept is opened to interpretation and relational, those elements are considered prevalent. This goes back to the original purpose of home-building, which was to protect human beings against rough and hostile external conditions. But what happens when home becomes part of the danger and this home has been destroyed?

The first two speakers who participated to the discussion are Israeli political theorist Hagar Kotef, and event manager at ‘Lola Lik’ Fares Al Qadi, who are now living in Europe. They were joined later via Skype by the Gaza-based speakers, Nagham Khader Ali-Hasan, who is a specialist in environment design and Mkhaimar Saud Abusada, who is an associate professor of political science. The event was complemented by a performed monologue by Zohor Al Masry and the interventions of Chris Keulemans who moderated the event.

Rather than being at the centre of the discussion, Marjan Teeuwen’s project Destroyed House Gaza is employed as a catalyst for dialogue, reflection and social change, allowing the artworks to truly engage with the audience and to resonate beyond the gallery’s walls where a more passive form of aesthetic consumption often dominates. Art always constituted a great mean by which to learn about the ‘self’ and, above all, the ‘other’, this includes the world and the nature of being a human itself for example. Such an initiative is needed more than ever at the moment as we are globally experiencing a rise, or at least a resurgence, in a chauvinist form of nationalism that is resulting in the formation of deep social divisions.

Before introducing any of the speakers, the event opened with Zohor Al Masry’s work This is Me in Foreign Countries. In the piece, the artist challenged the connection between belonging and citizenship. She also confessed the feeling of guilt and shame she felt the day she received her Dutch papers.

Spoken in Arabic, printed translations of the monologue to English were handed out to everyone. Despite the language barrier, the presence of the artist who performed this highly personal work alone, in front of the audience, made it even more striking than on paper. The monologue worked as a perfect transition between the exhibition and the talk. Less static than the photographic medium, it directly engaged the audience thanks to its strong confessional and confrontational approach. This resulted in creating a certain emotional tie with the rest of the room. It also established a heightened sense of community and compassion within the gallery space and between people, who, at first sight, might seem to have very little in common.

The discussion started immediately with an introduction of the two speakers that were physically present, Hagar Kotef and Fares Al Qadi, who both live away from their initial home or, to put it differently, built a new home away from their home. We learn very quickly that for Al Qadi, who is now located in the Netherlands, displacement has always been part of his life and, in some ways, part of his heritage. While he was raised in Abu Dhabi, he already moved in the past to Syria to study, which his grandfather also did in the 40s as a way to ‘have a better life’. Despite the seriousness and gravity involved in the topic, hope remained omnipresent throughout the discussion, which was already reflected by the surrounding artworks that were initially produced as a gesture of hope as reminded by Chris Keulemans. 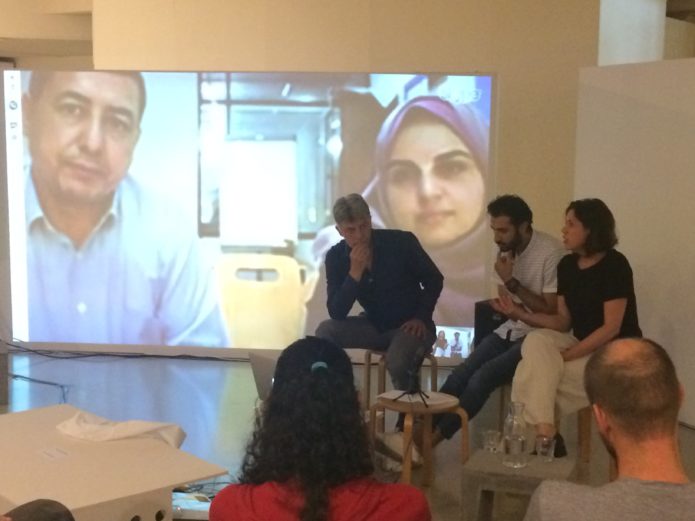 Hagar Kotef’s intervention brought in a more political tone to the event. She argued that politics and ‘home’ go hand in hand and that ‘home’ is, as a matter of fact, a direct product of politics, either it is on a personal perspective or a societal one. The idea of ‘home’ and ‘building a home’ generally arises from feelings of belonging that are very similar to the ones involved in the concept of nation and community, and therefore, has a direct influence on how we establish or perceive ourselves – in other words, our identities – and vice versa. Indeed, understanding this is fundamental in understanding the situation in Gaza in which ‘homes’ are specifically targeted by Israeli forces to destabilise their politics and nation. While the concept of nation and the existence of national identities are largely psychic and has to do primarily with shared values and ideas as pointed out by post-colonialist theorist Benedict Anderson, there must be some material aspect to it for them to exist. By destroying homes, Israel does not only destroy Gaza’s properties but their existence and possibility as a community. The destruction of civilian ‘homes’ represents a well-known and extensively used military tactic in war zones.

She also advanced the thought-provoking idea around the act of ‘dissociation’ that emerges in times of crisis, which entails people to distance themselves from their government. She suggested people to take responsibility for it and blamed a sense of hypocrisy in which we collectively partake that goes, according to her, in the way of democracy. While the discussion focused more particularly on the context in Gaza, I cannot help thinking at that moment about the refugee or migrant crisis that took place last year – despite having its own historical and political context – in which the label ‘refugee crisis’ was often used in western-centric media to dehumanise and to diminish the impact of the crisis, as if we were trying to deny the global nature of the event and our responsibility in it.

The live connection with Gaza was then launched. Technical issues remind us of the physical and the cultural distance between ‘here’ and ‘there’. Electricity and Internet are such granted commodities nowadays that we seem to forget that it is actually a privilege. We learn that the area is subjected to frequent and sometimes lengthy power cuts. This is due to Israel limiting the electricity that is coming through the supply lines. 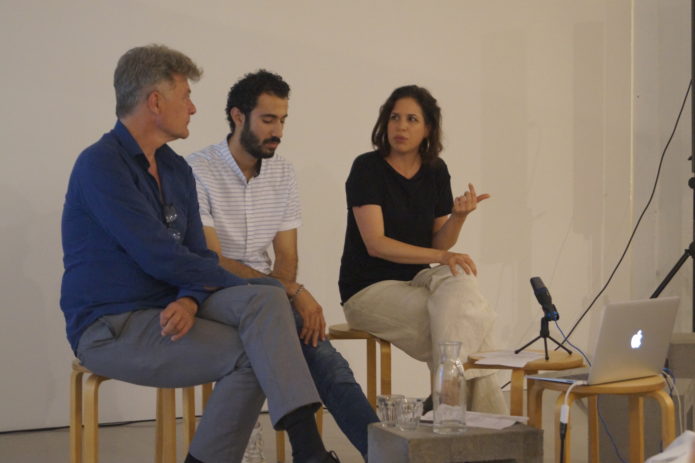 While the speakers are all coming from very different, yet hybrid, backgrounds, all of them seem to agree on one major point: the difference between ‘being at home’ and ‘feeling home’. While there is an undeniable psychological connotation involved in it, ‘home’ now represents a place that predominantly, and in some cases, only exist in their unconscious and memory, with souvenirs that bring up a mixed-feeling of nostalgia and melancholia. This feeling is not only ‘owned’ by the people who fled their home but it is equally shared by the ones who remained that might not have lost their home materially, rebuilt or not. This has probably to do with the fact that ‘home’ often refers to an idealised place of comfort, which is hardly conceivable when it is surrounded by constant fear and danger. Following that, building a home takes on a whole new significance. Although the purpose of finding safety and comfort is still underlying, it also becomes an act of resistance and only when there is hope, it is possible to resist.