Leading up to exhibition House of Wisdom, please join us for an event at Pakhuis de Zwijger on bringing online spaces, such as media platforms, back to the people!

For many the Internet and digitalisation carried the promise of a more open, transparant and democratic society, but in recent years that promise was disavowed by corporatisation of the digital sphere. Still there are many initiatives that stay true to the original ambition and use the digital to build and empower communities. Like in many other areas, ownership is key in making it effective, but what should that encompass? Next chapter in our New Democracy quest (NB: New Democracy is a program series by Netwerk Democratie & Pakhuis de Zwijger) is ‘digital commons’. For example, can we revitalize democracy by designing and developing community owned digital spaces for information or creating collectively owned and managed WiFi networks? Let’s ask Engin Önder, initiator of the Turkish citizens journalism 140Journos, and Imre Jonk, working on free wireless networks with Amsterdam Wireless. 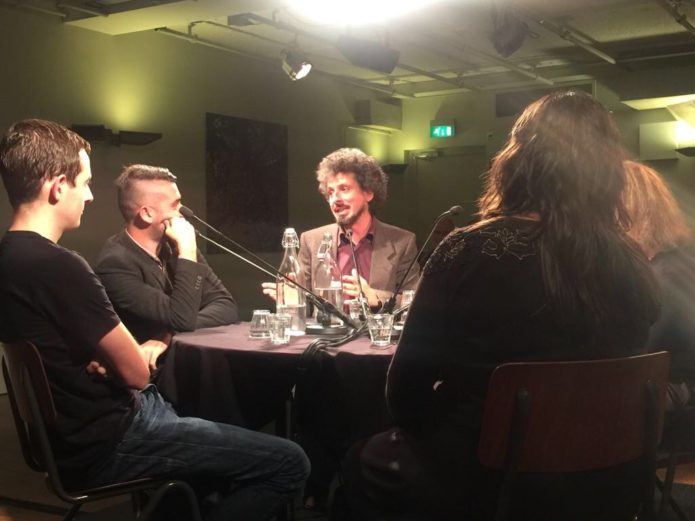 This event is a collaboration between Netwerk Democratie, Framer Framed and Pakhuis de Zwijger.

Imre Jonk works for Amsterdam Wireless, an initiative for free wireless mesh networks to connect places in Amsterdam. Amsterdam Wireless is part of Freifunk Netherlands, the Freifunk community is part of a global movement for free infrastructure and open frequencies. Besides this, Imre works for Bits of Freedom, the leading digital rights organization in the Netherlands. He will join the conversation as an expert on community WIFI networks and digital rights.

Caroline Nevejan is a researcher and designer who has been involved with the emerging network society and digital culture since the 1980’s. Recently she has been appointed as the Chief Science Officer of the municipality of Amsterdam, responsible for orchestrating research between the city administration and the different scientific, academic and artistic universities in the city. Caroline will reflect on the developments in de digital sphere in the last decades and will address the position and role of the government concerning digital commons.

Denis Roio, also known as Jaromil, is a researcher in philosophy of technology and a software artisan. His creations are recommended by the Free Software Foundation and redistributed worldwide, while he is also an active contributor to media theory discourses. Since the year 2000 Jaromil dedicates his efforts to build Dyne.org, a non-profit software house gathering the contributions of a growing number of artisans and socially engaged developers. Jaromil joins the conversation as one of the leading experts on open source software, community empowerment and (digital) commons.