Exhibition review: the artist as charlatan, discussing the exhibition ‘As If’

Fake news surrounding the American elections, tumult caused by WikiLeaks, video’s of police violence and Trump’s insulting tweets: the current relevance of an exhibition on politically inspired media art could hardly be any greater. In As if, The Media Artist as Trickster (2017) the centre stage goes to artists who dare to address urgent political and social issues and to challenge the influence exerted by the media on society.

As if, The Media Artist as Trickster is about the socially engaged contemporary artist who no longer climbs the barricades shouting slogans in the hope of making a difference. No, the artist is depicted as a ‘trickster’ and activist, a cunning charlatan using tricks to mislead. Art is employed tactically to expose dominant power structures and to undermine them. To this aim, the artists in this exhibition have drawn heavily from Tactical Media, a political and cultural movement that began in the nineties in response to the arrival of the new media. In this movement the power of art and public relations were combined in order to expose injustice and abuses. 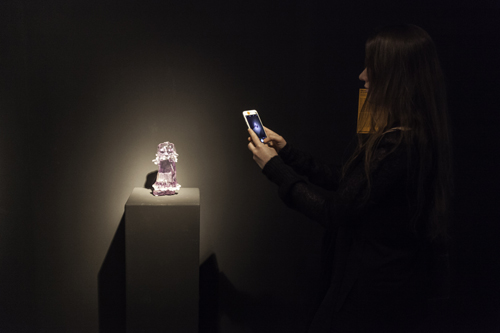 The Framer Framed exhibition space is visually divided in two. The first part, the so-called Newsroom, displays art in which hacks and fabricated ‘news facts’ play a role. The works show how news is consistently coloured and used as a tool for propaganda. The artists selected by curators Annet Dekker and David Garcia don’t shy away from an elaborate public hoax in their contention that lies can ultimately reveal the truth.

In the provocative Dow Does The Right Thing (2004) we see how Andy Bichlbaum from The Yes Men passes himself off as a representative from Dow Chemical Company, the company that bore responsibility for the gas leak in Bhopal in 1984, as a result of which hundreds of thousands of people were exposed to hazardous substances. The artist even managed to hustle his way into a live broadcast on BBC World, where he announced publically that Dow would pay damages to the victims and clean up the disaster site. The news caused a huge sensation… but it wasn’t true. On that day Dow lost two billion dollars on the stock exchange. With this act, The Yes Men, just as other artists in the exhibition, fomented a social debate and managed to put new subjects on the political agenda.

The second part of Asif,theMediaArtistasTrickster is an exhibition within an exhibition. In this section, the walls are painted black and at the top the following words are pasted in large letters: GUANTANAMO BAY MUSEUM OF ART AND HISTORY. The text labels are written in bright orange, evoking the overalls worn by the prisoners in the infamous American prison, while the dark atmosphere elicits a feeling of entrapment.

This virtual museum has been compiled as part of the work of lan Alan Paul, also the founder of the organisation. It comprises a collection of works by artists who reflect upon and criticize Guantanamo Bay and related subjects. One of the most intriguing pieces selected by Paul as part of this project is the video Homeland Is not a Series (2015) by the artists’ group The Arabian Street Artists. In this video we can observe how the makers of the American television series Homeland asked the artists to spray graffiti texts on the walls that served as decor to the show. But the artists took the opportunity to pour caustic criticism on their clients in Arabic. They wrote satirical texts in graffiti that were only deciphered after they had already been aired. 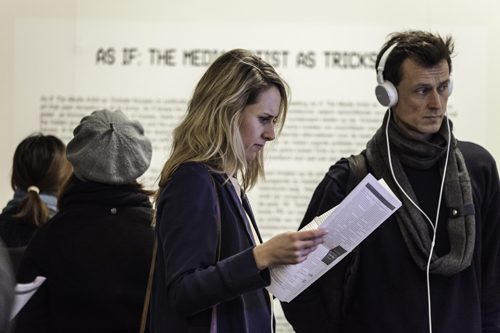 Various websites, built by artists are also included in Paul’s collection. One of these is the website voteauction.com, created by the collective UBERMORGEN.COM, that gave the impression that Americans, during the presidential elections, could sell their vote to the highest bidder. In 2016, The Yes Men launched sharethesafety.org, a website that made it look like the National Rifle Association had claimed that citizens in danger were donated a gun. With the ‘Guantanamo Bay Museum’ Paul has created a very elaborate work that adds depth to the exhibition. Unfortunately, this concept is not sufficiently elucidated, as a result of which the majority of the visitors probably won’t grasp the narrative.

The artworks in this exhibition are powerful enough when they stand alone, but together, as a whole, they make a deep impression. As If, The Media Artist as Trickster is an expression of activism and responds to radical awareness. In spite of this, the exhibition is not heavy or depressing, but rather induces a sense of clarity, like being awakened from a trance. The power of art to raise awareness of social issues cannot be surpassed. These artists don’t just signal problems in society, but they have taken social action through the medium of their art. This causes us to realise the extent to which the media is constantly influencing us, but also awakens us to the potential we have to exert our own pressure through the same means: If you can’t beat them, join them.