The exhibition Crisis of History – Welcome to the End of History (2014) features multimedial work by young and aspiring artists from the tremendously challenged Middle East. Main theme: modernism, or, rather, what remains of it.

Only three minutes. That’s how long it takes the ferry to bring you from Amsterdam Central Station to a unique urban oasis which offers room to a variety of cultural organisations and creative initiatives at the Amsterdam ‘Kop van Noord’. Since Spring 2014, the recently fully renovated IJ Pavilion of the Tolhuistuin (pronounced as toll house town) buzzes again with all kinds of scintillating and inspiring activities, due to the efforts undertaken by its (now former) artistic director Chris Keulemans and many others. Crisis of History – Welcome to the End of History is the first part of the triptych Crisis of History – Art, Memory and Resistance in the Middle East curated by Robert Kluijver for Framed Framed. This exhibition initiates Framer Framed´s leading exhibition policy at their new location. 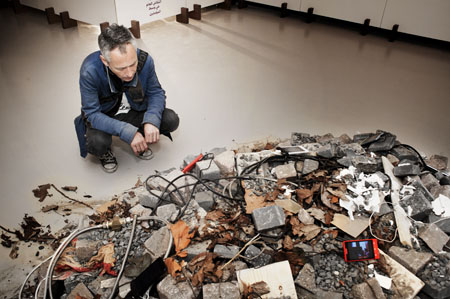 Critical public readings
Framer Framed hosts interdisciplinary public debate meetings with artists, scientists and internationally operating curators since 2009 in order to discuss the (still) rather one-sided role of ‘white’ museum policies in the multicultural and globalising society. In September 2013 Framer Framed organised an international group exhibition [http://www.alartemag.be/en/en-art/contemporary-iranian-art-speaks-from-the-heart/] focussing upon outspoken work by contemporary Iranian artists elsewhere in Amsterdam. Earlier this year, in May, al.arte referred to the vernissage [http://www.alartemag.be/art/jonge-kunstenaars-uit-het-midden-oosten-in-amsterdam/](Dutch only) of Welcome to the End of History. Saturday 5 July this first exhibition opened again after a minor rebuilding of the space, although its finissage was initially scheduled late June. Curator Robert Kluijver offered a guided tour which al.arte joined.

“What we may be witnessing is not just the end of the Cold War, or the passing of a particular period of post-war history, but the end of history as such: that is, the end point of mankind’s ideological evolution and the universalization of Western liberal democracy as the final form of human government.”

Kluijver referred to the above-mentioned “end of history” (a quote of Francis Fukuyama, proclaimed when the Berlin Wall fell in 1989) in an online statement. About that time the status quo was defined by hostility between the mainly capitalist West and the communist Eastern Bloc during the Cold War. Nowadys, the notion of a post-modernist liberal democracy born from the sociocultural sense of Western superiority seems similarly outdated. Kluijver: “In that sense there’s no room for alternative cultural and economic trails of development, a priori not when these are possibly drawn from Trotskist, tribalist or Wahabist ideologies. This results in cultural tension worldwide, especially in the Middle-East and among its peoples in diaspora.”

Context vs. cultural cross-pollination
Whoever visits the Tolhuistuin-complex will notice the activities of its other organisations, partly because the Tolhuistuin programme is smartly tuned to communicate and involve as many initiatives as possible. Hence visitors are faced with a selection of the works exhibited by Framer Framed in the space between the main entrance (downstairs) and the staircase leading to Framer Framed’s venue at the first floor. Passers-by turned their head and halted when they caught conscious sight of one of the five remarkable pictures by the American-Afghan artist Aman Mojadidi.

The many elements associated with gangster rap and ‘bling’ as known from the Western hip hop scene proved attractive enough for quite a few funny selfies but allowed for a second, more serious look as well. As surreal as these portraits may look, Mojadidi thematised something very real: the social prestige and various symbols of Western cultivation donned by former Afghan warlords who pragmatically allied themselves anew with each change of foreign power in the country. Fusing global identities, Mojadidi, who grew up in America but migrated to the Afghan capital Kabul, portrays his character as a ‘Jihadi gangster’.

Strange places and Sci-Fi creations
Down the corridor we are faced with several aerial pictures by the Saudi surgeon and artist Ahmed Mater. Mater, especially known abroad for his installation Magnetism, examined amongst other things the condition of the desert landscape, dissecting the polluting consequences of the rash, inconsiderate logistic and construction policies focussing on commerce and the consumer society. Displayed here as well is a slide show by the Paris-born photographer Louis-Cyprien Rials. Specially commissioned for this exposition, the slide show features previously unexhibited images of various demilitarised, deserted areas of Europe visited by Rials in 2010 and 2011 as a part of his prolongued tour of such conflict zones. Rials travelled by motorcycle and spent the night in or near the ruins of modernist buildings, capturing the unheimisch reality of his surroundings in daytime. We see images of the Armenian enclave Nagorno-Karabakh in Azerbaijan (the scene of a war between Armenia and Azerbeidjan from 1991 to 1994, status still conflictual), the exclusion zone around Chernobyl including the nearby city of Pripyat (deserted by its 50.000 inhabitants in the days following the nuclear disaster in 1987) and of Northern Cyprus, still vehemently claimed by Greece.

Downstairs, somewhat inconspicuously displayed near the staircase, one could view fifteen pictures addressing the world of Western cartography and geology. Pakistani artist Mehreen Murtaza exposes the feasibility and relativity of the Western geographical narrative of the Middle-East and the wider region in dated and authentic photographs of people, gatherings and places but manipulated in a surreal, Sci-Fi-like manner.

Five out of twenty photographs of the American-Iranian artist Eric Parnes adorn the adjacent wall with images of the long-gone splendour and frivolity of the parties in the 1960s and 70s at the now abandoned but once majestic Iranian embassy in Washington DC. Parnes zooms in on the fragility of diplomatic ties and joyful encounters when profound religious-political upheavals uproot intercultural connections.

Idealist dreams
A prominent feature of the works displayed on the first floor is the confrontation between idealist dreams (and illusions) of old and the challenges faced by new generations in the socio-political wreckage of our present-day reality. Quoted below is Urok Shirhan, an artist born in Iraq but raised in the Netherlands. Fascinated by the legacy of her communist parents, Shirhan interviewed them in order to examine the broad spectre of motivational factors underlying their communist outlook. She decided to conduct similar interviews with Arabic-speaking children of other communist parents when she felt new questions popping up within herself. The result of this work and the shift in perspective is presented in an installation of two videos (“work in progress” according to Shirhan) entitled Communist Parents and Children of the Left.

“I realised it was not necessarily about our parents, what they did back then or how attractive their stories and ‘vintage-like’ pictures are. It is about how these stories and experiences have shaped our generation, and us, whether we wanted to or not. The question is not about images and ideals from the chokehold of the petrified past. In order to test their relevance in the present, we have to bring these experiences into actuality, into practice.” Urok Shirhan

An installation by the Uzbek-Yemeni artist Ibrahim Quraishi (born in Nairobi) features a wooden bed in which the notorious leader of the Waffen SS, Heinrich Himmler, is said to have enjoyed some rest. The bed is, intriguingly from a general Western point of view, described as a ‘treasured heirloom’ of the grandmother of a German friend of Quraishi. Pinned to the wall above it were three colouring pictures of one man’s portrait, brightly coloured by Palestinian school kids from Ramallah. The man turns out to be Quraishi’s Yemeni grandfather, whilst the portrait was shot in a photo studio in Jerusalem in the first half of the twentieth century. Quraishi, son of a leftist diplomat couple, also supplied nine digitally manipulated family portraits which both recall and ridicule the Golden Age of Islam as perceived and at times blindly lamented by many intellectuals in the Arab and Muslim world.

A day in the life of…
Three (video) installations by different artists offer, respectively, a unique vista; 24 hours in the life of the Free Syrian Army in Aleppo and Idlib provinces (Emeric Lhuisset), the work of Muslim migrant workers in Mecca (again Ahmed Mater), and the nerve-wrecking patrol by an armed Saudi soldier (the artist himself) of a Saudi border village, evacuated but frequented by Yemeni snipers during the violent conflict between Saudi Arabia and Yemeni Houthi rebels in the north of Yemen. The artist, Abdelkarim Qassem, was there to ensure that the cleared village on the border was indeed deserted prior to it being razed to the ground by the Saudi army in order to use it as a buffer zone in the conflict.

Lhuisset’s video shows the human side of the rebels, labelled as terrorists, by allowing the viewer a sneak peek into their surprisingly ‘normal’ daily life. Mater created an installation out of a pile of construction rubble pierced with nine mobile phones that continuously play recordings (made by the workers) of collapsing buildings being demolished in Mecca, a city open to Muslims only. It is quite ironic, but the installation subtly reminds one of the sky scrapers of New York and Ground Zero. Four conjoined photographs disclose how frantic building activities irreversibly destroy the often ancient heritage of the site.

History 3.0?
The eloquence of this first part of the triptych Crisis of History is stunning. With Kluijver en Framer Framed joining hands, we might well witness a project with a depth and meaning of epic proportions for the Dutch art scene –provided that part two and three will offer similar strong work. If only a larger audience would realise its value! So far, high school classes, (art)history students, journalists with a focus on the region and students and teachers of Arabic, Islamic and Middle Eastern studies have not stopped by en masse, even though education is part of Framer Framed’s aims and notwithstanding the fact that they offered an incredibly rich public programme.

Moreover, not a single review had appeared by the time of Welcome to the End of History’s reopening in July. Why didn’t this exhibition make it to the arts pages of the renowned Dutch newspapers? Where were the socially engaged critical art lovers anyway? Did they somehow got lost on the way to the Tolhuistuin complex? Welcome to the End of History already hinted at a number of crucial aspects of historical Western geopolitical policies in the Middle East and the region at large. The Low Lands largely ignored it, for the time being.  But time will tell in the end, as always.

By Aya Johanna Daniëlle Dürst Britt
This text has also been published on {al.arte.magazine}
September 2014

Welcome to the End of History, the first part of the triptych Crisis of History, was exhibited at Framer Framed from 2 May 2014 till 28 August 2014.