Verslag: Who decides if, and how, destroyed cultural heritage will be reconstructed in Syria and Iraq?

On the 1st of March 2017, Framer Framed organised a lecture by archaeologist and heritage specialist Nour Munawar, tying into the exhibition As If: the Media Artist as Trickster. His presentation focused on the role cultural heritage reconstruction plays in areas that are currently at war, particularly focusing on Syria. Of all the artworks in As If, the talk was specially framed by Morehshin Allahyari’s Material Speculation: ISIS (2015-2016) – an artwork that consists of 3D prints that reproduce several cultural heritage artefacts destroyed by ISIS.

To contextualise and start-off the lecture, art curator and critic Nat Muller introduced the event. To do so, she highlighted the importance of the As If exhibition and the role of Tactical Media – especially in our current times –, and pointed out that in light of this lecture on heritage and archaeology we should look at the politics and ideology behind the destroyed artefacts. In questioning the political implications of this, Nat Muller reminded the audience that the destruction of cultural heritage translates into a loss of cultural memory. In her words, As If connects recent forms of Tactical Media with these objects and artefacts – appropriately accentuating the political implications of both.

Nat Muller closed her introduction by relevantly quoting George Orwell in 1984 – “who controls the past controls the future, who controls the present controls the past” – and asked the public to keep the quote in mind throughout the lecture. She then introduced the speaker of the evening, Nour Munawar; who is a specialist in conflict heritage and conflict archaeology as well as a PhD Candidate at the University of Amsterdam, currently researching the reconstruction of Syrian and Iraqi cultural heritage in post-conflict contexts.

Munawar started his lecture by explaining that throughout his presentation he would focus on heritage sites that are currently at war – particularly on ones that appear in the media often, such as Palmyra (Syria). By framing these sites as places that not only belong to Europe and the West, but also represent the identities of the Syrian and Iraqi local populations, the speaker revived a frequently posed and challenging question: who owns the past? Moreover, in looking at places such as the Ancient Gates of Nineveh (in Iraq), or the Great Umayyad Mosque (in Damascus), Munawar contested – in his own words – that perhaps it is “through the process of decay and loss that monuments are incorporated into the archaeological record”. If this is so, how should one consider the process of reconstruction of sites that are currently at war – such as Palmyra?

Followingly, the speaker concentrated on the recent history of the aforementioned Syrian historical site, and explained how ISIS took over Palmyra in May 2015. Because they had recently used social media to widely show to the rest of the world how they had destroyed important cultural heritage in Mosul (Iraq), it was feared that the same would occur in Palmyra; and in August 2015 this was confirmed – as they destroyed the 2000 years’ old Baalshamin temple, the Temple of Bel, and the Arch of Triumph.

Adding on to this, Munawar explained how it is important to keep in mind that Palmyra had witnessed other types of destruction too – such as looting and mortar fires –, and not only from the hands of ISIS. When Palmyra was recaptured by Syrian government forces in March 2016, largely helped by Russia, several questions were raised: who decides if the site should be reconstructed, particularly whilst the country is still at war, and who should carry out the reconstruction?

Due to the – social, political, economic, etc. – significance of Palmyra and its geopolitical location, several groups have become interested in trying to control it (curiously, the site is often referred to as “the Kings’ cake”). These include the local people of the country (as it is part of their ancestors’ heritage and cultural memories, and it symbolically unifies Syrians) and the Syrian government and its opposition (as it is at a strategic location between Syria and Iraq, and controlling the site is a sign of power). Others include – what the speaker calls – “non-state radical actors” (such as ISIS), who are interested in performing a sort of cultural cleansing; Russia, that utilizes the site as a propaganda weapon; and the West – who executes modern colonialism hidden behind the idea that Palmyra belongs to everyone.

The site, however, was re-occupied again by ISIS in early 2017 – and with this, more cultural heritage was destroyed. One wonders, then, what the role of reconstruction in Palmyra will be; and what new interpretations of heritage this will involve. At this point, Munawar interestingly analysed destruction and reconstruction as “two sides of the same coin”: as whoever will have the right to reconstruct Palmyra, will have the right to decide the fate of the Syrian people. 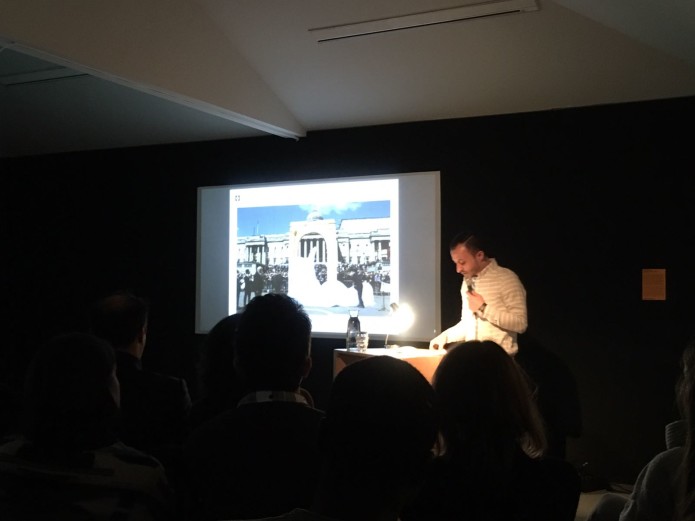 As Munawar followingly explained the reconstruction of parts of Palmyra has already started, as a marble copy of the Arch of Triumph was shortly placed in London’s Trafalgar square in 2016. This Arch, which is far from being an authentic replica, is now exhibited in Dubai; and is supposed to end up in the same place where the real Arch was (in Palmyra).

The speaker ended his lecture by pointing out how the aftermath of the reconstruction can be as destructive as the act of destruction itself, particularly if it is done by the people in power – as it can be used as a political tool that erases cultural memory. Munawar concluded that the reconstruction of destroyed cultural heritage should not be carried out whilst the area is still at war, and it should not be done by one actor only (usually, the one who wins the war). Starting from the basis that (to quote the speaker) “state of the art modern restoration technologies cannot replicate or recreate the authenticity of contested heritage”, reconstruction of heritage can begin to be discussed once a war ends – but it needs to respect the multi-ethnic local population and its choices.

After asking the public not to applaud his presentation and end his talk in silence – as a sign of respect towards the Syrian population –, Nat Muller interviewed the speaker briefly. She first asked him which would be the minimum conditions for any heritage reconstruction to take place (particularly in Syria and Iraq), and he answered the following: one would need to raise the local population’s awareness of the site, and then listen to their opinion on how the reconstruction should happen (for instance: would Syrians want the Arch of Triumph of Palmyra reconstructed, if it symbolizes the victory of the Romans over the Parthians in the 3rd century?). Nour Munawar further explained how, as part of his PhD, he will conduct interviews with Syrians and Iraqis to ask them how they would want to see their heritage reconstructed (or not) – thus attempting to make archaeology a ‘from the bottom up’ practice, more relevant for the people than for the ones in power.

Throughout their conversation, Nat Muller and Nour Munawar talked about the current law gaps that allow for the looting of archaeological artefacts, the difficulty of knowing the provenance of stolen objects (as they are mainly sold on an illegal basis), and the role of the war’s outcome in deciding who will conduct the reconstruction of cultural heritage. When asked where the responsibility of the reconstruction lies, the speaker answered that legally this is in hands of the government – but in terms of logic, the local people should decide. The discussion also touched on the possibility of protecting World Heritage Sites from their destruction during war; and Munawar appropriately questioned the ethics of sending military soldiers to protect cultural heritage.

The speaker called for a possible merging of the global perspective on cultural heritage during peaceful periods with the local perspective held by local people during war periods; creating a type of glocalization of heritage: an agreement between the government, international organisations and local populations on how to assess, preserve, and reconstruct destroyed artefacts.

To conclude the discussion, Muller asked Munawar if one can speak of modern colonialism when the West takes part in the reconstruction (and displacement) of cultural heritage, or if it is more of a horizontal dynamic. To this, Munawar answered that the new ways of imperialism and colonialism do not use armies but other types of tactics; such as the high number of PhD students employed by European Universities currently researching how to reconstruct Aleppo from an architectural point of view. It seems, then, that several European states have already taken individual steps towards their own reconstruction of war zones, as there are no international collaborations – and everyone wants to claim their part of the (King’s) cake.

Once the interview between the speakers ended, the floor opened up for questions from the audience. Several of these asked about his bottom-up approach, and Munawar maintained that local people should be the ones taking decisions on the heritage they want reconstructed and displayed – not the governments. He recalled the example of the Umayyad Mosque, which is built on several historical layers (and their archaeological ruins); and explained how it should be possible to ask the local population of Damascus which historical period they would rather have their heritage linked to – thus allowing archaeology to uncover that period. Some members of the audience were worried that this would mean that other heritage would be destroyed, and asked Munawar if it would be best to make local people understand that all heritage is worth keeping. To this, the speaker answered that if Syrians don’t choose their heritage other powerful forces (such as the government or other countries) will do it for them.

Interestingly, many reconstruction options risk erasing an important time period; as several of these (particularly governmental and international ones) seem to want to avoid remembering the past 5 years of war by rebuilding the artefacts as they were before the conflict. Towards the end of the event, one audience member pointed out a possible option that will also be considered by Munawar throughout his PhD: leaving heritage sites empty, without reconstructing them, thus avoiding the erasure of any historical period (including the most recent one).

The discussion closed on a clear note: it is, in the end, a question of making compromises; and negotiating which layer of history the local population will want to be aware of. What remains to be seen is how this reconstruction will be carried out, and how long it will take for compromises to be reached – particularly now that, as this text is being written, the ancient site of Palmyra has reportedly been re-occupied by the Syrian government with help from Russia (on the 2nd of March 2017). This very recent move gives a sense of urgency to Munawar’s work; as Palmyra is a uniquely symbolical and heavily disputed site that continues to be claimed by many parties. Additionally, it is imperative to know how much of the recent conflict Syrian people will want to remember.